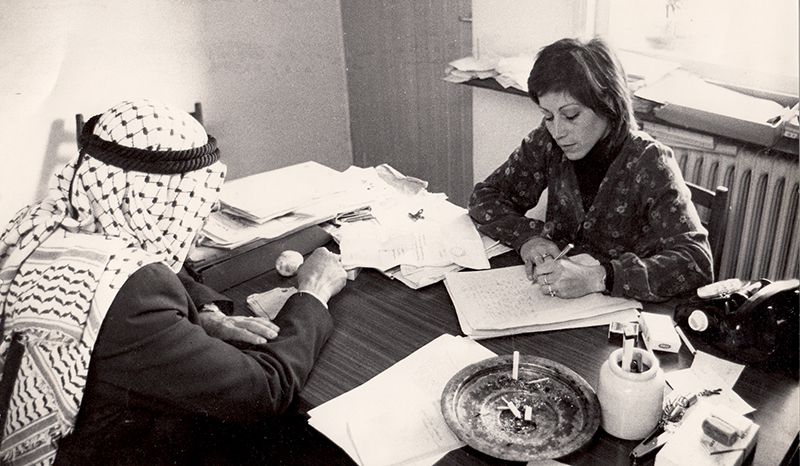 For nearly 50 years, Israeli human rights lawyer Lea Tsemel has dedicated her life to defending Palestinians within the Israeli criminal court system. Quick to remind that Palestinians live under Israeli occupation, Tsemel draws from hope, optimism, anger and justice to continue her work as an advocate and defender of Palestinian rights.

Tsemel has taken on countless cases, “from feminists to fundamentalists, from nonviolent demonstrators to armed militants.” Despite vitriol and criticism from the public and the press, Tsemel has remained firm and fearless, pushing to offer fair support and defense for Palestinians. “If you are fighting against injustice … some people turn their bodies into tools. They don’t have war planes or tanks—they have bodies,” says Hanan Ashrawi, Palestinian feminist, academic and political leader. “It doesn’t mean [Lea] condoned this or she thought it was right, but she said, ‘You have to understand it in the context in which this happened.’ This is a very difficult and rare situation, where you could look at the victim-cum–violent person, and understand the motives for violence, and understand that this is a response to a greater form of violence.”

From 2015 to 2016, Tsemel’s tireless caseload included the likes of one 31-year-old woman whose planned car bomb went awry, as well as, most prominently, the high-profile trial of one of Tsemel’s youngest clients, a 13-year-old boy accused of attempted murder with a knife. It’s during this year that filmmakers Rachel Leah Jones and Philippe Bellaïche follow Tsemel for their feature-length documentary, Advocate.

Jones and Bellaïche concentrate primarily on Tsemel’s cases, combining fly-on-the-wall footage with Tsemel’s press statements and interviews. While we do not see Tsemel argue her cases, we do observe Tsemel in discussions with colleagues, thumbing through massive piles of documents and watching news segments from her phone. (In meetings with her clients and her clients’ families, Advocate uses animated, sketch-like sequences to protect the defendants’ identities.) Tsemel moves fast and speaks frankly, quick to make a fiery retort and shrug off any insults (“traitor,” “leftist,” “devil’s advocate,” “enemy”). There’s more than one shot of Tsemel speed-walking away, the tails of her lawyer robes flying behind her. But despite her unapologetic nature and sureness in her work, there are the quiet moments of reflection too, when the weight of her task feels impossible. After all, a victory for Tsemel often simply means a slightly reduced prison sentence. (In 1999, she helped to successfully petition the Supreme Court to make illegal all interrogation methods that entail physical pressure, but, says leading Israeli human/civil rights lawyer Avigdor Feldman, “The secret service doesn’t abide by it.”)

Along with Jones and Bellaïche’s primary narrative, Advocate also delves into Tsemel’s personal life, insofar as it informs her practice today. Interviews with Tsemel’s two children shine some light into the significant personal toll of Tsemel’s steadfast and prominent work. With archival footage, Advocate introduces us to a young Tsemel in her early 20s—when she first began to recognize occupation as oppression—as well as some of her landmark cases. In a statement from 1981 at the Nafha Prison, Tsemel holds the prison accountable for the deaths of two hunger-striking political prisoners through force-feeding. In 1987, Tsemel defended her own husband, anti-Zionist activist Michel Warschawski (who is also interviewed throughout the film), when he was accused of treason against the state. When an unsympathetic interviewer asked in 1999 on Israeli TV just who Tsemel would go so far to defend, Tsemel replies, “Any Palestinian who resists the occupation.” (In response, the interviewer says, in disbelief, “It’s as if you identify with them!”)

Jones and Bellaïche avoid any dramatization or frills in their documentary, allowing Tsemel’s real-time practice to speak for itself, and they take care to elucidate Tsemel’s moral and legal framework without decrying any persons or people. Tsemel refuses to allow Palestinians to be depicted as indefensible, and she reminds that occupation means dispossession and repression: “Civilians under occupation have no civil rights.” The force of Tsemel’s work is in her optimism that change can happen—that although she no longer has any expectation that Palestinians can find fairness or justice in Israeli court, it doesn’t always have to be this way. “To us, being a prisoner is a fact of life,” says Ashrawi, who worked with Tsemel to defend Birzeit University students who were arrested for protesting. “It was Lea who said … ‘I recognize your humanity and what you’re going through.’”