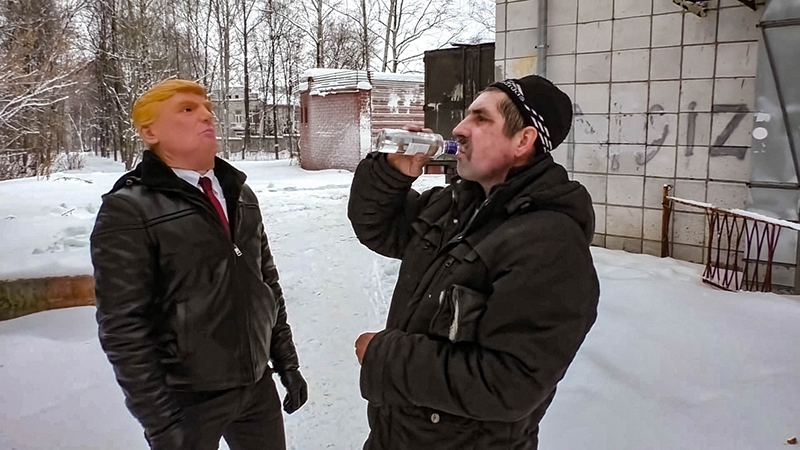 This film starts, curiously enough, with scenes from an archaeological site in Siberia, with the uncovering of a well-preserved, 2,500-year-old mummy. Hillary Clinton, on a visit to Russia in 1997, attends the museum where the mummy is being displayed. Then, the screen fills with ominous clouds and lightning, as a voice declares that the mummy wishes to be reburied, and Clinton’s visit to the mummy has resulted in a curse that will haunt her forever. This strangely cosmic event  is somehow integrated into the Russian smear campaign that follows Clinton into the 2016 election.

Before the screening I attended, director Maxim Pozdorovkin jokingly warned that his film, Our New President, had so much archival Russian propaganda footage that it was probably not safe for human consumption in one sitting, saying, “You’re not going to feel good at the end of this.” That much was certainly true, as a lot of the footage was firsthand, amateur video rants of run-of-the-mill Russians congratulating Donald Trump on his victory, claiming that Clinton was unfit, either because she is a woman or because the Russian media constantly portrayed her as physically and mentally unstable, finding any footage they could manipulate to back up their claims. Russian media built up the mythos of Trump while they tore Clinton down, giving him an almost middle class–to-riches backstory, claiming that Trump was an entirely self-made man. Clips from some of Russia’s most popular news channels felt alarmingly like tabloids—some of the claims sprinkled throughout the footage were that Clinton was suffering from epilepsy and, later, mental retardation. There were also claims that the protests that followed Trump’s election were funded by Democrats and that protesters were paid 50k a year and given full benefits for their participation (I wish).

The film inevitably takes viewers down the rabbit hole of the Kremlin’s control over media, starting with the creation of popular news outlet RT (formerly Russia Today) by the Russian government and, later, the annexation of NTV, a news channel that originally had no government ties and was less biased in their reporting. The film depicts NTV’s buyout and how many viewed this as the end of free speech in the press in Russia.

While there are some good examples of how certain news personalities in Russia use word gymnastics to evade questions about propaganda, the non-narrative style of Our New President tends to linger a little too long on home videos of Russians doing really odd things in homage to Trump that don’t lend any value to the film. Even though many Americans suspect that Russia had some influence on the election, I would’ve liked to have seen continuity between the footage to give viewers more of an answer on how Russian propaganda affects Americans directly. Further, there were chapters inserted in seemingly random places to give the footage a more linear feel with cringe-worthy titles. One title shows a black screen with the words “Who is Mr. Putin” but then splices Vladamir Putin‘s name so that it changes to Trump. To generalize, the people who would be open to watching this sort of documentary are most likely already opposed to one or both of these men, so I personally felt as though some of these techniques used throughout the movie seemed contrived and unnecessary. However, one of Pozdorovkin’s goals for Our New President was to make the audience uncomfortable with the fabrications of the media and the effects that these have on consumers, and in that way, I’d say he accomplished his goal.