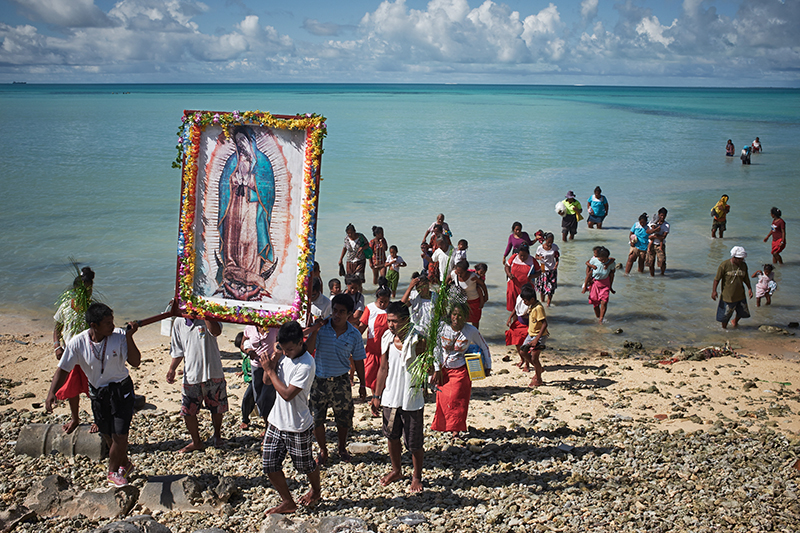 Stretching along the Central Pacific equator, the island nation of Kiribati rests, on average, only two meters above sea level. Based on the latest scientific consensus, all of Kiribati’s 33 coral isles and atolls will be completely underwater within the century. Already, islands have been rendered uninhabitable. Rising sea waters flood crops and freshwater ponds, and unprecedented, climate change–exacerbated storms vanish villages. Despite the nation’s seeming remoteness, it is deeply affected by the rest of the world, one of the first forced to confront the damaging, irreversible consequences of climate change. As former Kiribati president Anote Tong put it, climate change has become an issue of survival—a challenge to which the world hasn’t risen.

Matthieu Rytz’s evocatively titled documentary film, Anote’s Ark, doesn’t sensationalize, sentimentalize or condemn, and it doesn’t deign to provide any answers. Instead, it grimly examines what is happening to Kiribati through multiple lenses. It relishes in cinematic, birds-eye views of Kiribati’s islands and the bright, massive sea, and zooms in, too, dipping warily into the encroaching waves. Rytz offers brief glimpses into the lives of the islands’ indigenous residents: dancing and singing at town celebrations; sailing, catching fish and shredding coconuts; building protective walls of sandbags or wading, knee-deep, through flooded streets. He captures the tree-toppling winds when a hurricane strikes (despite being located along the equator, the once hurricane-free region has faced major storms in light of shifting global climate patterns). In the midst of it all, Rytz closely follows two individuals: Tong during the later years of his presidency, and Tiemeri Tiare, who goes by Sermary, a Kiribati woman who was selected to work in Auckland (New Zealand provides 75 work permits a year to Kiribati).

Anote Tong served as Kiribati’s president for the maximum three terms, from 2003 to 2016. During that time, he traveled the world from one speech and interview to the next, pushing for climate change action and policy. Rytz pinpoints the timeline with news clips and landmarks, like the Paris climate agreement, which aimed to limit global warming to below 2 degrees Celsius with measures starting in the year 2020. Focused, Tong investigates options for how Kiribati can “migrate with dignity.” He purchases 20 square kilometers in Fiji, requests humanitarian funding and considers the possibility of floating, human-made islands or underwater cities. Briefly, in voiceover, Tong mentions Kiribati’s imperialist and colonialist history (the year that the U.K. ended phosphate mining in Kiribati, 1979, was the same one that Kiribati attained independence). He reflects on what the loss of land means for indigenous peoples—whether the grasp would loosen on their distinct culture, tradition and spiritual ties.

Movingly, Rytz shifts to a more personal lens by following the warm Sermary, whom we first meet with her husband, Ato, and their children. After Sermary is selected to receive a permit to work in New Zealand, she leaves her family and island in a tiny plane and meets her childhood friend in Auckland. After six months apart and working physically demanding jobs, she finally makes airfare for Ato and her children to join her. When Sermary gets pregnant, she wonders how the child’s life will be different from hers—whether or not the child would belong to her home, Kiribati, or to New Zealand, where Sermary and Ato still struggle to find their place.

Through Tong and Sermary, Rytz loosely explores the major policy questions, potential solutions and setbacks that drive the worldwide climate change discussion. Remaining hidden behind the camera, he juxtaposes his shots of the Kiribati islands with crashing, melting glaciers, massive cityscapes and briefly, an NYC climate justice rally, during which activists carried signs like “Pacific Islanders rise above” and chanted “We are fighting / We are not drowning.” Throughout, there’s a constant reminder that the residents of these islands contribute least to climate change but are most impacted by it—a reminder that Kiribati’s residents shouldn’t have to be forced to leave.

Anote’s Ark is an ambitious project. Some elements are only examined cursorily, but the film is most impactful for its inspection of the changing dynamics, borders and barriers of daily life on Kiribati—and beyond. After Tong’s presidency, Kiribati’s newly elected party began dismantling most of his climate change–related policies. Here in the U.S., Trump has announced his plan to withdraw the U.S. from the Paris climate accord. Still, Tong and countless others continue to campaign and fight for the lives, land and dignity of Kiribati, knowing that the island nation’s fate—while perhaps inevitable—is one that might eventually reach the rest of the world. –Kathy Rong Zhou