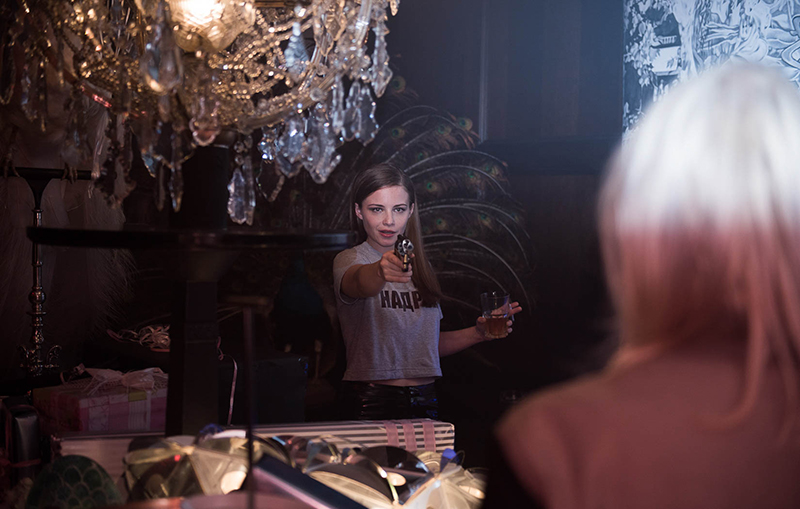 Axolotl Overkill is a character study of Mifti (Jasna Fritzi Bauer), a teenage girl who feels disaffected by the life that people her age are supposed to lead. She is among a ragtag bunch at school who show little to no respect to their teachers and other figures of authority. School life is not the life for her. Mifti does as she pleases, and she drifts in and out of the house to hang out with an older woman, Alice (Arly Jover), with whom she has a loosely defined romantic relationship.

A woman serves lunch at her school, and Mifti notes her brashness. The two end up in the principal’s office over a minor foodfight, and Mifti discovers that the woman is actor Ophelia (Mavie Hörbiger). The two strike up an unlikely friendship, and as they hit the town together, Mifti reveals her penchant for partying late, drinking and doing drugs. She exhibits her devil-may-care attitude toward sex and canoodling with adults and stays out for days and nights on end. The question is whether she’ll be able to realize her yearning to emancipate herself from her age role and find happiness with Alice, or if real-world consequences and pressure will chew her up and spit her out.

Based on Director Helene Hegemenn’s bestselling novel, Axolotl Roadkill, Axolotl Overkill puts Mifti in the spotlight, and Bauer executes her role with a striking balance of suppressed emotion and smirking confidence. She anchors the film as Mifti, and elicits our concern as she traipses through her German city in search of adventure within its confines. Bauer evokes a sense of teenage wanderlust well—she recalls characters we’ve all known in our high school years who’ve defied what was expected of teenagers and faced the world with gusto.

Mifti’s fate and her family’s worry for her keeps our attention through the film. The screenplay, however, yanks us about as we follow Mifti through the storyline. Each scene feels as if it hangs next to each other, parallel, on a string in a series of panels—but none of them feel cohesively connected. Though Mifti exists as a wayward person with erratic behavior, Axolotl Overkill doesn’t impart a grander sense of purpose to her character through the course of the film. This hamstrung my interest in each scene’s context and relegated me to anticipating the end of the film. All that I really wanted to know was whether she was going to make it out alive—not necessarily the journey.

Axolotl Overkill’s objective correlative of an axolotl salamander feels forced. Axolotls, which Mifti encounters in a home aquarium, reach adulthood before they develop lungs and remain gilled aquatic creatures. I would assume that the comparison between it and Mifti plays out more gracefully in the original novel, but the explicit designation of Mifti as an adult in a teen’s body already feels clear. That’s not to say that there isn’t some poetic value of the film. The agency with which Mifti lives and her self-assuredness prompt us to visit our own youth fantasies. Additionally, her romantic exploit to woo Alice rewards us.

Axolotl Overkill isn’t a perfect film. It’s not bad, either. Ultimately, it mostly feels flat. But I am glad that I’ve seen it. I also feel excited for what other filmic adventures Hegemenn may have in store as she continues on as a director. There’s something here, but it needs to morph—to walk on land. –Alexander Ortega