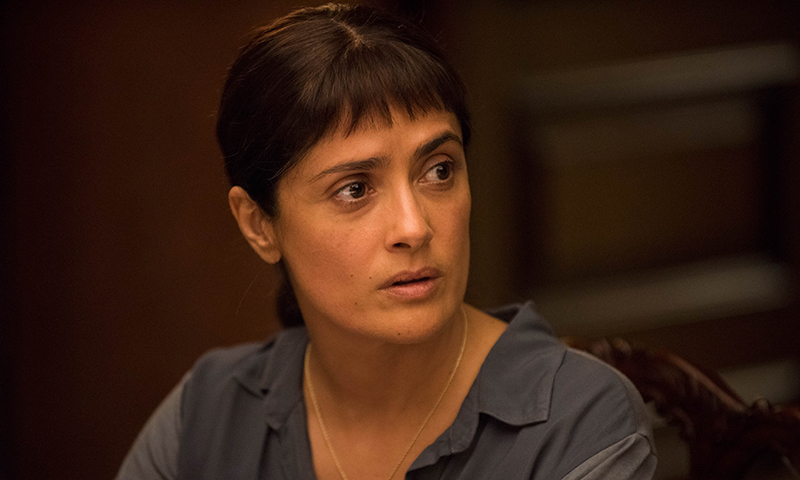 Salma Hayek appears in Beatriz at Dinner by Miguel Arteta, an official selection of the Premieres program at the 2017 Sundance Film Festival. Courtesy of Sundance Institute | photo by Lacey Terrell.

Selma Hayek plays Beatriz in Beatriz at Dinner. She is a holistic therapist who specializes in massage, and the opening scene features her performing something along the lines of reiki. She’s centered and grounded as a global citizen, a cell in the overall organism of Earth. Beatriz is also a proud goat owner, a pet about whom she worries in light of a neighbor’s complaints. She lives in California, which means that there are wealthy clients in her midst. One such client is Cathy (Connie Britton), whose daughter’s cancer Beatriz treated with natural methods. Beatriz gives Cathy a massage, primping for an important business dinner that Cathy’s husband, Grant (David Warshofsky), has called for with some important business figures. Beatriz expresses her sadness that a neighbor has killed her goat. To top it all off, once she’s finished with Cathy’s massage session, her Volkswagen won’t start, and her mechanic must finish with work to be able to combat the California traffic to fix her vehicle. Against Grant’s druthers, Cathy invites Beatriz over for dinner in their mansion.

Once the guests start arriving, their wealthy, upper-class comportment creates unease as Cathy forgets to introduce Beatriz to the arriving guests. Alex (Jay Duplass, Transparent) and his wife (Chloë Sevigny) are a younger couple whose pompousness falls short only to that of Doug Strutt (John Lithgow) and his (third) wife (Amy Landecker, Transparent). Doug orders a drink from Beatriz as she eases by to try to converse with the men, confusing her with the proverbial help at the house. As Cathy belatedly introduces Beatriz to the ladies, and they react superficially as Beatriz tells them about herself and what she does professionally. Amid the discomfort, it turns out that her mechanic can’t come by until the next day. Even more uncomfortable: As the party sits down for dinner, Beatriz discovers that Doug is a horrible person. His latest business exploit involves mercilessly exploiting sensitive land that’s home to wildlife, and he boasts of killing rhinoceri on safari. Beatriz holds her peace for as long as she can—but Doug proves to be a threat to all that she holds dear.

Hayek delivers a spellbinding performance as Beatriz, who maintains her composure amid blatant racism, classism and outright rudeness. Hayek allows Beatriz to beam with energy and balance. Though a good chunk of the Beatriz at Dinner features the chatter of the wealthy white folks versus Beatriz’s contrasting silence, Hayek’s posture, gait and facial expressions pronounce her character as one who fluctuates and ebbs with each situation. Conversely, Lithgow makes for one bastard of a Doug Strutt. Even though he’s a funny guy, Lithgow seems to rise to the occasion the most as a villain in my eyes, and we love to despise his chauvinist character in Beatriz at Dinner. Transparent has groomed Duplass and Landecker well, as they accentuate their rich-Californian archetypes in this film to pervade the screen with haughtiness. The character economy so starkly others Beatriz that it satirizes their upper-class behavior. Additionally, as Beatriz becomes fed up with their accommodation of Doug’s wickedness, her resolve to face him excites viewers as we watch her summon her spirituality to fight back.

In theory, Beatriz at Dinner should have no problem reaching viewers in the way of a wide release (despite an ambiguous ending). The acting talent present in this film bolsters Hayek as she spearheads this dark chamber drama. It’s good to see performers of this caliber coming together to create a thought-provoking movie. –Alexander Ortega