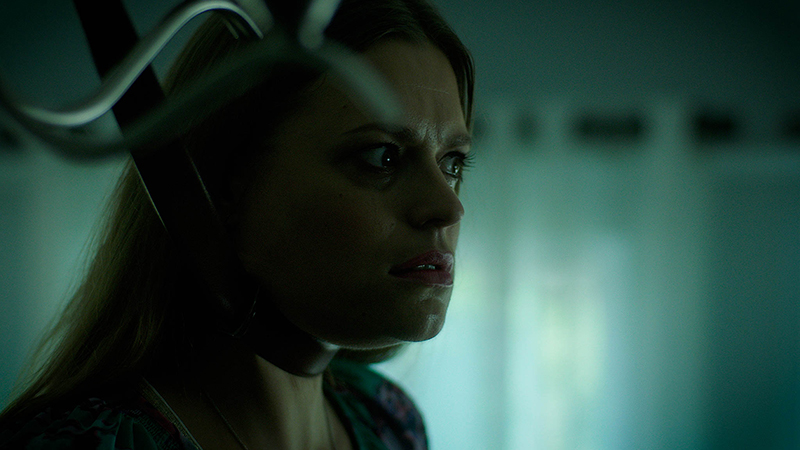 Marianna Palka appears in Bitch by Marianna Palka, an official selection of the Midnight program at the 2017 Sundance Film Festival. Courtesy of Sundance Institute | photo by Armando Salas.

Some of the scariest movies ever made are those that show a relatively sane person’s gradual descent into madness. Stories like this penetrate us with the fear that someday we’ll encounter that last straw; the one that finally shatters our ability to think rationally. This is essentially the horror element in Marianna Palka’s Bitch—our protagonists aren’t so much running from madmen and zombies as much as they’re crumbling under the daily pinpricks of everyday life. Like the Joker says in Alan Moore’s The Killing Joke, “All it takes is one bad day to reduce the sanest man (or woman) alive to lunacy.”

From Bitch’s opening moments, we know that we’re meeting a woman in trouble. Jill (Marianna Palka), an overworked and unappreciated housewife, has just buckled a belt around her neck. As the camera pans upward, we see that she has tied the opposite end to the ceiling fan. In a series of panicked breaths, Jill steps off of the table and dangles helplessly for a few devastating moments until the light fixture breaks free of the ceiling, sending her collapsing to the floor.

It’s a hell of a way to open a film—Bitch wastes no time in revealing that its main character is facing some very serious psychological issues. Perhaps even more disturbing is our introduction to Jill’s husband Bill (Jason Ritter), a stereotypical, alpha-male douchebag who is too preoccupied with a fellow employee’s panties to notice that his wife is coming apart at the seams. When Jill finally snaps, she starts to exhibit the characteristics of a caged dog by stripping naked, hiding in the basement and gnashing her teeth at anyone who comes near.

At this point, the narrative readjusts to focus on Bill’s clueless attempts to parent his four children in the absence of their mother. This was an unexpected but not unwelcome change in the plot’s trajectory—here I was thinking that Bitch would chronicle Jill’s primal and violent attack on the suburban nightmare that has consumed her life, but instead I learn that it’s about the character arc of a petulant man-boy who comes to realize how important his wife is to him.

Both Palka and Ritter offer tremendous performances throughout the film. Palka’s transformation into a feral beast is equal parts horrifying and sympathetic; Ritter’s portrayal of Bill as he changes from a clueless douchebag into a present father and husband is funny and organic. Bitch also has a fine cast of young actors who play Jill’s children—their reaction to this sudden and bizarre transformation feels authentic to how most kids would react to the situation.

While there are no doubts that Bitch is a creative and powerful film, there are times at which Palka’s overall vision seems to become blurred. For example, Morgan Z. Whirledge’s improvisational jazz score starts to feel muddled as it competes with Jill’s animalistic sound effects, and there are wide swatches of hasty editing that feel out of place. These decisions were likely supposed to disorient the audience and bring them a bit closer to Jill’s chaotic state of mind, but they don’t quite meld with the scenes that don’t include her–which are more than you’d think.

All the same, Bitch is a film for anyone who has felt trapped by the societal pressures that somehow still manage to dehumanize us. Palka has a unique and refreshing voice, and it will be interesting to see what she comes up with next. –Alex Springer