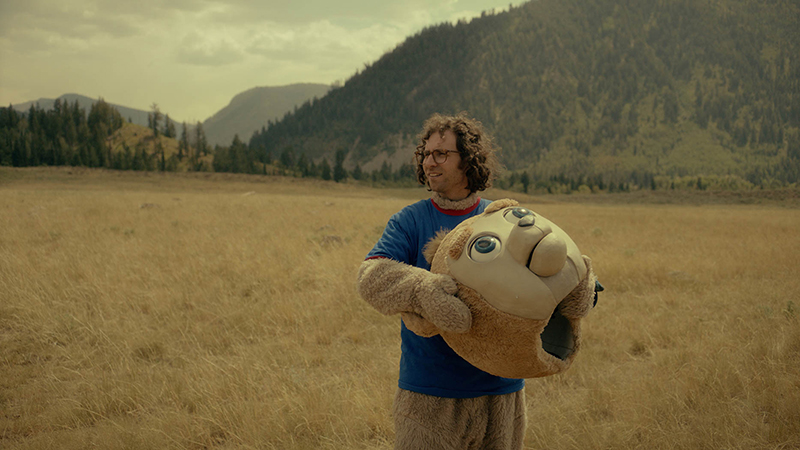 Kyle Mooney appears in Brigsby Bear by Dave McCary, an official selection of the U.S. Dramatic Competition at the 2017 Sundance Film Festival. Courtesy of Sundance Institute | photo by Christian Sprenger.

For many career comedians, the transition from writing and directing sketch comedy to writing and directing motion pictures isn’t always successful. Usually we end up with a decent idea that is frantically held together by dick jokes, but that’s not the case with Brigsby Bear. Saturday Night Live alumni Dave McCary and Kyle Mooney, along with co-writer Kevin Costello, have created an endearingly off-kilter comedy about loss, recovery and the exhilaration of DIY filmmaking.

When we first meet James (Mooney), we learn that he is obsessed with a TV show that stars Brigsby Bear, a bizarre hybrid between Doctor Who and Teddy Ruxpin. When he’s not posting online updates about his theoretical interpretations of the show’s complex mythology, he’s presenting his findings to his parents Ted (Mark Hamill) and April (Jane Adams), who have built a bunker beneath the wilderness of Utah. But then the cops show up. It turns out that Ted and April abducted James when he was a baby, and have been raising him as their own within a doomsday scenario of their own invention. To make matters worse, James is horrified to learn that Brigsby Bear doesn’t exist in the real world—his childhood hero was only one of Ted’s many contrivances.

After James reunites with his biological family, he starts learning about the world that has been kept from him for twenty-five years—but with no Brigsby Bear, it doesn’t hold much interest for him. Until he learns about the concept of filmmaking, that is. With his newfound skills and the help of his sister Aubrey (Ryan Simpkins), James sets off to finish the saga of his beloved Brigsby Bear.

The concept of Brigsby Bear coupled with Mooney’s spot-on portrayal of the main character is definitely the stuff of SNL—it’s creative, funny and anchored by an extremely talented comedian. Most films that are cultivated from the roots of sketch comedy end up buckling under their lack of narrative foresight. Brigsby Bear manages to dodge that pitfall with Mooney’s and Costello’s nuanced screenplay. The fact that Brigsby Bear is such a huge part of James’s identity creates a painful rift between him and his biological parents, who see the TV show as a painful remnant of their son’s abduction.

Despite the uniqueness of Brigsby Bear’s story and its well-rounded supporting cast—Greg Kinnear’s actor-turned-detective is one of the film’s unsung heroes—it’s not without its bits of fluff. Call me cynical for criticizing a film for being overly positive, but the way many things about James’s transition into the real world just “worked out” felt somewhat rushed. It was almost as if the filmmakers were so excited about the funny parts that they neglected a few opportunities to develop supporting characters and ramp up the conflict levels.

All the same, Brigsby Bear is the perfect kind of oddball comedy that Sundance is known for spotlighting. In many ways, this feels like something Jared and Jerusha Hess might have envisioned back in their Napoleon Dynamite days. It’s also a heartfelt love letter to the fandoms that keep us all up and running, no matter where they came from. Just like James, we all have our cultural obsessions, and his ability to see the beauty in something that came from a dark place is inspirational. Brigsby Bear is the kind of movie that makes us grateful for movies. –Alex Springer