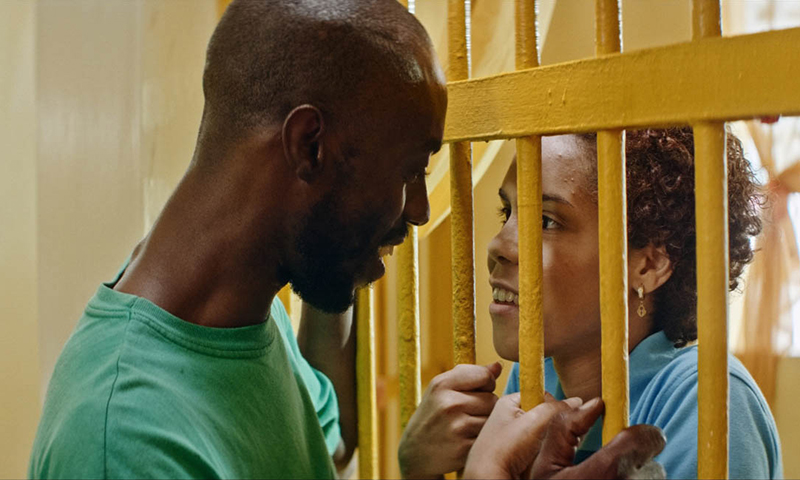 Carpinteros tells the story Julián (Jean Jean), who has been admitted into prison for a probationary period while his case goes through court. In the Dominican Republic, he arrives to a well overcrowded prison where there is some loose supervision, but for the most part, strong personalities and men in unique positions run the show on the inside. Entering with a little bit of money, Julian secures himself a sleeping mat. Manaury (Ramón Emilio Candelario) is the big shot around the facility who runs a drug operation inside the prison. He and some other men are wont to climb up to the barred windows to signal to the women in a next-door prison facility. They’re called carpinteros—which means woodpeckers—because of how they affix themselves to their perches like how a woodpecker fixes itself to its spot on a tree. They use a language of signing to communicate with the women across the fences. Manaury’s girlfriend is the beautiful and feisty Yanelly (Judith Rodriguez Perez), from whom he requests items like her underwear and photos of herself. Manaury is headed to another prison building, though, and will no longer have access to his perch. He scopes out Julián. Once Manaury finds Julián to be suited for the job of an intermediary woodpecker to send messages to Yanelly on his behalf, he bullies him into a deal through which Julián can access some of the better aspects of prison life. As Julián begins to correspond with Yanelly—under Manaury’s supervision—she begins to attract to him. Julián insists that he’s just Manaury’s messenger, but Yanelly persists, and he cannot help but fall for her charm.

Carpinteros touts a strangely breathtaking set. The prison feels like an endless dream sequence with dingy corridors and platforms that seemingly lead to rooms on end. In this environment, the entire cast acts superbly well—especially the three leads, Jean, Rodriguez Perez and Candelario. Candelario executes his villainous role with panache, and Rodriguez Perez convinces us of her desire for Julián. Jean excels in easing Julián out of his reserved and reticent comportment and into finally reciprocating Yanelly’s feelings. Their fomenting passion for one another adds a compelling central conflict to the film, and when Julián and Manaury must face off at a new facility, the stakes are high.

What marks Carpinteros’ success the most, though, is its incredibly strong sense of story in a limited setting. We see the growth of Julián’s and Yanelly’s romance and their palpable desire for each other. A misunderstanding between the two of them allows the climax to crescendo against Manauly’s increasingly maniacal behavior. It’s a compelling love story that reverberates with a Shakespearean timbre. Carpinteros’ supporting cast—each ancillary inmate and the hard-ass prison employees—creates a believable atmosphere of oppression and struggle for survival. The milieu screams “cutthroat!”

With Julián’s austerity comes some difficulty in fully identifying with him. He’s our protagonist, and we want him to overcome the obstacles that he encounters in the prison system, with Manaury and in love with Yanelly. With his guard up in prison, however, this small element of the screenplay only lets us sneak in as he softens before Yanelly.

Pound for pound, Carpinteros treats us to its narrative dynamism. Be prepared to emote each step of the way through this film. Carpinteros sweeps us up with its characters’ fiery wills as a cohesive work. –Alexander Ortega