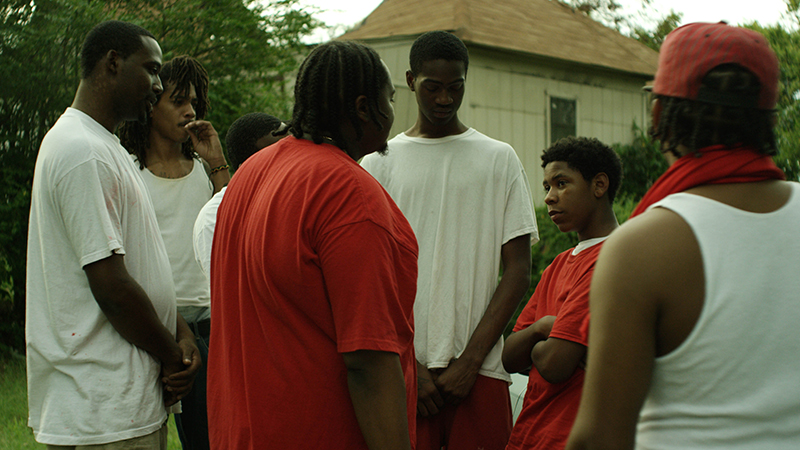 Devin Blackmon appears in Dayveon by Amman Abbasi, an official selection of the NEXT program at the 2017 Sundance Film Festival. Courtesy of Sundance Institute.

In the “NEXT” section, Dayveon depicts the frustration of the film’s namesake character, Dayveon (Devin Blackmon). Dayveon’s older brother, Trevor, was shot and killed. Now without a male figure whom he feels he can look up to, Dayveon aims to follow in Trevor’s footsteps as a gang member. He dons all red and catches the attention of some local bloods in his suburban Arkansas hometown, and they jump him in. At 13, he forms a bond with gang leader Mook (Lachion Buckingham). Parentless, he lives with his sister, Kim (Chasity Moore), her partner, Brian (Dontrell Bright), and their baby. Brian aims to be a role model for Dayveon. Dayveon, however, is fascinated with a gun that he keeps in a shoebox in his room—almost as if it is his talisman. He exudes a sense that it is his place to rise to his brother’s former prominence in the streets.

There’s no school life for Dayveon. Though it seems to be summer, he actively chooses to explore the blight of his town. Convenience stores are where he finds meals comprising bags of chips. He pedals his bike waywardly around town. Brian does his best to interact with Dayveon, but the teenager deflects Brian’s kindness with attitude. Dayveon seems to find solace in first firing his gun away from town, asserting himself with what he finds to be self-reliance. Mook also demands that Dayveon be game for any kind of “real shit.” Even when a convenience-store holdup goes awry, Dayveon keeps a steely resilience in order to stay on Mook’s good side. As Mook ropes him in closer, however, Dayveon comes at odds with his family and will need rescue.

Dayveon animates the drab day-to-day of its characters’ environment. The film’s ambient score allows Dayveon’s ennui to bloom before us and recall those moments in viewers’ lives when they may have felt a lack of direction while growing up. Spare vignette interludes capture a kind of cognitive blur that Dayveon experiences inwardly amid his grief about Trevor’s death. These devices help to elevate a story that moves slowly—a story that emulates Brian’s resolve to reach Dayveon and the difficulty thereof. Additionally, some of the film’s allure lies in the idiom and code that the characters speak, a mark of authenticity. The dialogue helps to immerse us in Dayveon’s local culture.

Even with the alternative methods for pronouncing this story, Dayveon feels more like a snapshot with a camera shake or a blurred movement, as opposed to the full narrative extension of a film like Moonlight. Nevertheless, Dayveon’s point is to shed light on lifestyles like Dayveon’s, Brian’s and Mook’s through story—one not often told. The flow of Dayveon’s foray into the life of a gang member plays out romantically. With this, we feel a connection to Dayveon and can view the world through his eyes, even if we may know that he’s poised for self-destruction.

Dayveon feels melancholic on account of its characters’ economic strife. The dreamy cinematography, however, communicates the beauty of the setting and the importance of Dayveon’s coming of age within it. Hence, this film offers us a sort of contemporary period piece becoming of the “NEXT” category, which includes films that toy with ideas of narrative in cinema. Of course, being that it is in the “NEXT” section, Sundance 2017 may be your only chance ever to see it. So look below for the “next” opportunities to witness this interesting work, which may challenge us and elicits our reflection on this American experience. –Alexander Ortega