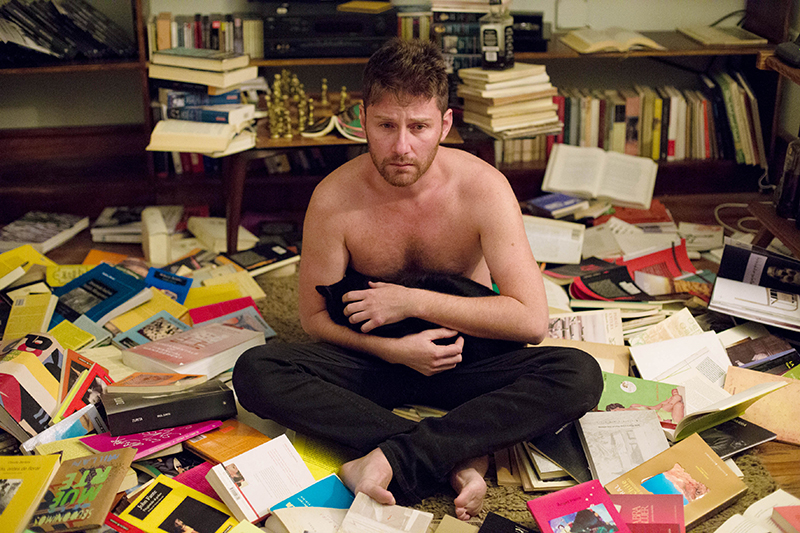 Jorge Becker appears in Family Life by Alicia Scherson and Cristián Jiménez, an official selection of the World Dramatic Competition at the 2017 Sundance Film Festival. Courtesy of Sundance Institute.

In Chilean film Family Life, Boris (Cristián Carvajal) and Consuelo (Blanca Lewin) are preparing for an extended stay in France with their young daughter, Lucía. After running into him at a funeral, Boris has arranged for his distant cousin Martín (Jorge Becker) to watch over their house and their cat, Mississippi, during their absence. He hasn’t spoken to him in many years, and they barely know who he is. Once he arrives, Martín proves to be a strange fellow. He shrouds his emotions and indifferently tells Boris that he doesn’t read when Boris invites him to dig into any of his books in his vast collection. Martín even tries to kiss Consuelo as she gives him money for their maid, out of Boris’ sight. Once they’re gone, Martín reframes a family photo so it just shows Consuelo’s face. He smokes in the backyard and blasts classical music. He also tries to pay off the maid so she stops coming, insisting that he will clean instead.

Once Mississippi runs away, Martín prints posters announcing that the cat is missing. Another pet owner eventually posts a lost-dog sign over his, and he calls her to complain. They meet up to rectify the situation—and thus he meets Paz (Gabriela Arancibia). He calls her, mendaciously claiming that he saw her dog nearby—an obvious advance that she acknowledges. She’s open to a dalliance with Martín, however, and the two begin a steamy, sexual relationship—largely in the house that Martín looks after. He parries her questions about the woman in the photo, telling her that his wife left him and took their daughter. Martín and Paz come to belong to each other, and as she brings her son, Seba, around the house, Martín begins to assume the role of the “man” in their trifecta, and seems to open up emotionally. The clock is ticking, however, as his cousin’s family will soon return.

Directors Alicia Scherson and Cristián Jiménez present Family Life as an anxious film: We watch Martín spin his lie to Paz while we become enamored of her. Martín entreats us to identify with him as the film’s central main character, but this comes at odds with our privileged knowledge that he’s swindling Paz. This furnishes an element of surprise for the film and its ending, which I think that I would have expected otherwise. For however creepy and off-putting Becker performs, Arancibia matches it with her sultry warmth. As Martín breaches the point where he would either need to break the truth to Paz or let the punches roll, we see a proverbial light at the end of his tunnel of sociopathic behavior—with Paz’s silhouette in the center. The question is whether he can overcome his wanton, wayward misdirection and stand up on his own two feet as an honest person—or if he’ll disappoint all around him and twist everyone else’s world and emotional wellbeing.

Family Life works as a character study of a man still in the skin of a younger, reckless version of himself. The unease that the screenplay facilitates for viewers—from Martín losing the cat to lying about his life—drew me in at a fairly even pace, and the film rewards us with a balanced, understated narrative arc. The evenhanded scoring also lends to the film’s fluid trajectory. If you enjoy love stories and misadventures therein, Family Life will be worth seeing at Sundance this year. –Alexander Ortega