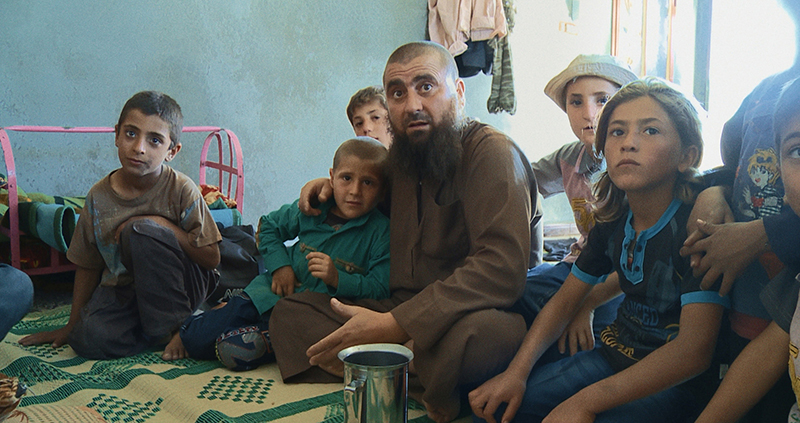 Of Fathers and Sons

It’s difficult to know even where to start with the “World Cinema Documentary” selection Of Fathers and Sons. It’s clear, however, that it’s an incredibly essential film, and it touches on an array of issues. Director Talal Derki journeys to his hometown in Syria to document the life of a radical Islamist family in an Islamic Caliphate. The people in these communities live the lessons and philosophy of the Quran down to the letter. The caliphate is al-Nusra, which is a sect of al-Qaeda. Derki postured as a radical sympathizer in order to gain access.

Abu Osama is the patriarch of the family whom Of Fathers and Sons examines. He lionizes Osama bin Laden and celebrates that one of his children was born on Sept. 11 (in 2007). He has eight children and affirms that they are to become soldiers for the army to fight the holy war that he and his compatriots have continued. His boys idolize him and ask about the battles he’s fought; and one boy asks about a beheading that he performed. Meanwhile, his boys emulate the stories they hear about warfare in their playtime, such as decapitating a bird they catch and building bombs out of soda bottles, citric acid and “red soil.” It’s unclear as to whether they really attend school and, if so, how much. The film more so depicts early exercises for the boys in something that’s like preparatory boot camp, where they jump, tuck and roll over tires in the ground. Eventually, the majority of Abu Osama’s boys get shipped off to real insurgent-military training before they’ve even hit puberty.

The most engaging attribute of Of Fathers and Sons is its agency humanizing Abu Osama and his boys and entreating me, at least, to relate to them. This has nothing to do with their ideology or militancy. But it’s clear that Abu Osama loves his sons. The fatherly ways in which he talks to, plays with, holds, scolds and adores his boys demystifies some of the boogey-man buildup we have of what extremists/radicals are like in the Western psyche. What’s more, the conviction he feels to God and the notion that he is fighting for the freedom of all Muslims is genuine. They see themselves as freedom fighters, and they scoff at Islamic moderates whom they view as pandering to Americans for the sake of reaping benefits like “luxury hotels” (my reading is that that element is an effect of global capitalism that they oppose, though no one states it explicitly).

Of course, the abuse (at least from a Western perspective) that his and other children face in the caliphate is egregious. Grown men condition Abu Osama’s boys ideologically, physically, mentally and socially for guerilla warfare before they’d even go to junior high in the U.S. Of Fathers and Sons takes a multifaceted record of these kids’ experience by showing their fights among each other, for instance, and their reluctance to fully acquiesce their military training at times. When Abu Osama experiences a major blow, moreover, their sadness bubbles up to remind us of how vulnerable they are in their environment. Yes, this film is heavy.

Of Fathers and Sons uses an almost cinéma vérité style for this documentary, except that Derki will sometimes ask questions to those on camera, here and there. He opens and closes the film with some context about his return to this place and, at the end, his tainted nostalgia for where he grew up. The rest of the film allows for the subjects to speak for themselves openly and honestly. Though the documentary transpires in this framework, I feel that Derki could and should have provided a little bit more editorial context to underscore that al-Nusra’s outlook is populist in comparison to that of other people in Syria and the Middle East.

By and large, Of Fathers and Sons shows a world that I never thought I’d ever have a chance to see. The value of the subjects’ contribution to a global conversation is paramount, despite the fact that their actions endanger many people’s lives. Though Derki (and likely many of us) expresses his terror at the end of his experience with al-Nusra, the opportunity to understand their culture and line of thinking more should have you eager to see Of Fathers and Sons. –Alexander Ortega