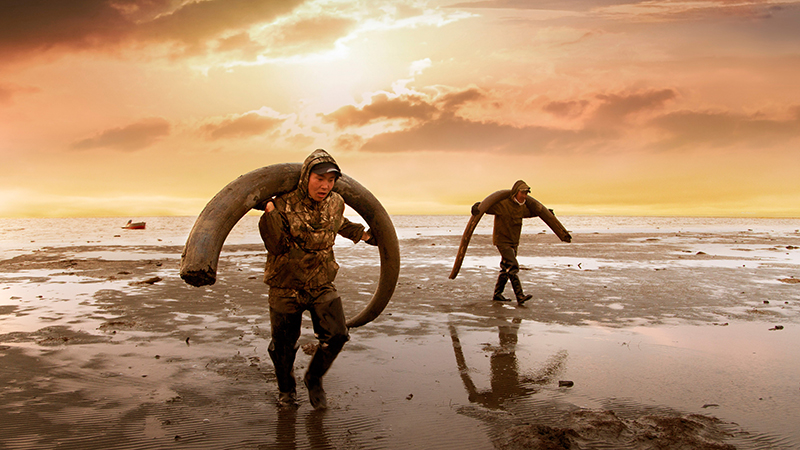 During a TED Talk featured in Genesis 2.0, a speaker analogizes that for the information age, the computer was the harbinger for the era. For the Industrial Revolution, it was the machine. And now, for synthetic biology, it’s the cell. Synthetic biology is still in its nascent stages, and it’s the field of thought that scientists tap into for niche biological projects. One such project, for Seymion Grigoriev, is to clone a wooly mammoth from surviving cells.

Woolly mammoths haven’t lived on Earth for 10,000 years. But, one (read: just one, albeit controversial) scientific advantage to global warming is that the New Siberian Islands in the Arctic have thawed enough to excavate literally tons of remains of woolly mammoths from the tundra. Yakut “Hunters” travel to the isles to dig for mammoth tusks, which they sell with aspirations for riches. Some sell to/for scientific projects while others sell tusks that end up in the hands of artisans. They can go from hundreds to thousands of dollars, depending on the quality. The diggers’ work in the unforgiving Arctic is not unlike that of what I imagine the Dakota oil fields being like as far as the conditions, heavy workload and bittersweet, northerly landscape go. Small teams disperse in search of pristine tusks—monetarily and culturally prized artifacts—but seem only to find damaged ones as they discuss the lore of those before them striking white gold with undamaged horns. The tusks the workers do find are often as long or longer than their respective heights, and they marvel at their sizes yet curse their imperfections.

The crux of Genesis 2.0 seems to come when the workers call Grigoriev when they come across a well-preserved mammoth carcass. Upon striking the carcass, it bleeds. Hence, finding a living mammoth cell anywhere in the carcass is paramount—not only for Grigoriev but in a broader scientific and cultural sense as well. Genesis 2.0 contextualizes the import of such discoveries by including recent successes in synthetic biology: Scientists have not only cloned animals but have spliced together sheep and goats (geeps), llamas and camels (camas), tiger and lions (ligers) and zebra and horses (zorses). (They all look like balanced combinations of their “parent” animals—it’s almost bizarre.) The plan, should synthetic biologists be able to find a living mammoth cell, would be to implant a mammoth embryo into a host elephant mother. The dream of the ’90s Jurassic Park is alive in the New Siberian Islands. Grigoriev and his team put what blood they can into test tubes and transport the mammoth body to a lab in search of any living cells that may remain. From there, the dealings with a cloning lab in Seoul, South Korea, and the Beijing Genomics Institute in China indicate that the ethics and broader social implications of synthetic biology and genetic engineering may be more precarious—even potentially insidious—than reintroducing mammoths.

Genesis 2.0 is beautifully shot. The New Siberian workers appear wistful in the vast, rolling landscape of the island they search. Concerning the narrative, there’s a lot to take in, and the film does well to introduce and develop the context as it relates to the workers, Grigoriev’s mammoth museum in Russia and the aforementioned cloning/genetics entities. It could be more direct, however, about how linked the workers are to the world of synthetic biology, to what extent they’re independent contractors and how invested they are in the politics of collecting mammoth tusks versus making a living in dire circumstances. Genesis 2.0’s three narrators—despite the shifting cultural perspectives—feel like they could have been pared down, as they quickly become chatter.

Gensis 2.0 is a mind-boggling look into one earthly phenomenon that may become one of synthetic biology. I recommend watching it to get a big-picture view of the ostensible return of the woolly mammoth and the issues that come with it. Those issues, in and of themselves, could make for a documentary, and this film introduces/discusses them well. You’ll learn something new if you watch this—and it could be your introduction to the next cultural shift via scientific advancement. –Alexander Ortega