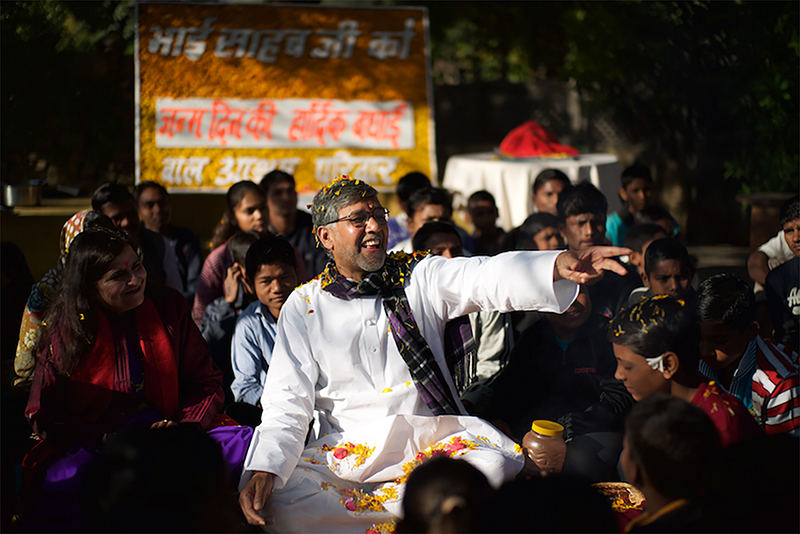 In New Delhi, India, Bachpan Bachao Andolan (shortened to BBA) raids a factory where young children are being forced to work. The factory is found almost empty—only a few adults are about, sitting at machines. When asked where the children are hiding, they say nothing, but it is soon discovered that boys at the factory were forced to hide under heavy burlap sacks in high heat. The boys are in bad shape. One boy, named Sanjeet, has burns on his face from hot powder that a fan would often blow around the room as he was forced to make cosmetic products. Another has had his finger broken with a rock as punishment for dozing off, while yet another has lived with a pain in his feet for three years—if he ever complained, he would be beaten.

It’s clear that the children are reluctant to trust anyone and don’t fully comprehend that they have been rescued. Kailash Satyarthi, founder of the BBA, however, is the first to break through to one little boy named Karim, who seems to be the most upset by the confusion, smiling through his tears as Satyarthi invites him to be his friend. We learn of Satyarthi’s story of activism for children, curious as a young child as to why he was in school, while another child his age was forced to work on the streets just outside his schoolyard. As Satyarthi cultivated his activism, he has personally been at the site of many raids, starting with a raid where he helped reunite a father and daughter, the latter of whom was about to be sold into sex slavery. Satyarthi has led the BBA to becoming a successful organization that has saved and rehabilitated around 80,000 children at the time of filming, despite backlash from traffickers and criminals who often use violence against them. The BBA will often use raids, risking their own safety as they sneak cameras into factories with children in order to use legal action against traffickers, searching for missing children in the process.

The most eye-opening part of the documentary is how far removed we, as Americans, think we are from the situation, when in reality, our consumption of cheap products without knowing where they are coming from perpetuates this cycle of human trafficking and violence. Even more appalling is the fact that BBA, as well as Satyarthi’s other organizations, work globally to end child slavery, including in the United States. Right before the end credits, there is a list of cities where Satiyarthi’s organizations have helped abolish child labor. The list starts with various cities in India, then worldwide, then San Francisco, Dallas and Los Angeles, placing an emphasis on the challenges that migrant workers and their children often face. However, despite the very heartbreaking reality that Kailash highlights, Satyarthi says toward the end of the film that he believes in the change he and others have been able to create, despite the opposition they have faced. This is proven as Karim and Sanjeet start the process of recovering from their trauma, are reunited with their families, and are given a chance to go to school for free.

For the screening at the Rose Wagner Center on Jan. 20, Satyarthi and his wife, Sumedha—a fellow activist with a large part in BBA—were actually in attendance along with director Derek Doneen, giving a Q&A after the movie. The biggest takeaway from hearing Satyarthi in his own words was that it was up to each person in the audience to “be the change maker,” challenging the viewers that day to step up and be a catalyst for change against injustice. Even though his work is not as widely known as it should be, Kailash Satyarthi is a Nobel Peace Prize recipient for his work, and continues the fight against child labor around the world.