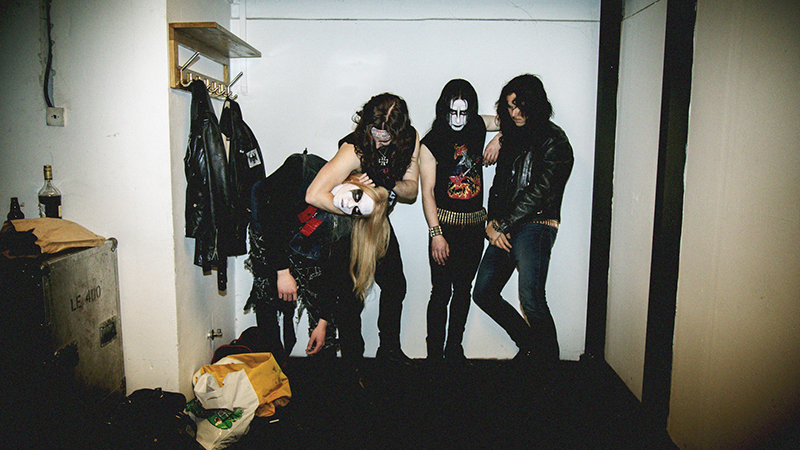 Admittedly, what I know about the Norwegian Black Metal scene I owe to Last Podcast on the Left—I basically knew what to expect from the plot of Lords of Chaos. However, there was no way to prepare for the brutal way the story is presented through the eyes of Euronymous (Rory Culkin). Starting with quick-and-dirty introduction to Norway and the beginnings of the band Mayhem, the movie sets up the relationship between Euronymous, the guitarist, and Dead (Jack Kilmer), the singer. Dead, with a faraway look in his eyes, is only lively onstage and when torturing cats. While it’s clear that Euronymous admires Dead, he goes too far by berating Dead when he has a depressive episode, and when Euronymous tells Dead to use a shotgun to end it all, Dead actually takes the advice.

As the first person to find Dead’s body, Euronymous is understandably in shock, thinking back to Dead’s suicidal behavior and realizing it wasn’t just for the image, as he once thought. However, after hesitating to call the proper authorities, he goes instead to a corner store, purchases a camera, and takes pictures of Dead’s body, using the photos to secure Mayhem’s infamy.

From then on, the core of the film revolves around the pissing contest between Euronymous, the other members of his “Black Circle,” and the musically talented Varg (Emory Cohen). The “Black Circle” descends further into crime and chaos, and the tension between Varg and Euronymous builds. Euronymous wants to take the credit for everything Varg does, and Varg, to push back, goads Euronymous into committing crimes with him to prove that he isn’t just talk.

Lords of Chaos has a very eerie way of conveying Euronymous and Varg’s inner emotions as they increasingly take things to the next level. There are moments where you can see the hesitation and doubt in Euronymous and Varg’s eyes as they witness each other’s crimes, showing that both of them, at various points throughout the movie, realize the depth of their actions yet follow through with the intensity of madmen who are true to their cause.

This film is very gory; sex, death and self-harm are treated in a visceral way. Scenes where the members of the “Black Circle” watch cheesy, gory, horror movies show the disconnect of how they view death and the reality of death as they come to experience it. Though the movie does not create any illusions of being completely accurate to the real-life story, I think it does a good job in showing Euronymous and Varg’s psychological states as they engage in their alpha-male power struggle, and even hinting that many of their followers were scared of them, foreshadowing the apex of their conflict. The need for acceptance, coupled with control issues and a thirst for fame, drives each of the “Black Circle” further into their sociopathic destruction.

In order to really highlight the relationship between Euronymous and Varg, I felt as though there may not have been not enough time allotted to the auxiliary parts of the story, specifically the early days of Mayhem with Dead as the singer. There is only one bloody show with the infamous pig heads before Dead’s death is shown. The musical element was a bit lacking for me, as viewers are only treated to glimpses of recording sessions after the initial Mayhem performance, but that may be due to the fact that the real performance, for the “Black Circle,” was the crimes they ended up committing later. I was also disappointed that Ann-Marit (Sky Ferriera) didn’t play a larger role in the movie; her role seemed to be complete subservience to men, though I guess you can’t insert a strong female character into a story that doesn’t have any.

Despite this, the film effectively portrayed Euronymous’ flashbacks of Dead with a sense of guilt overshadowing the sadness over his loss, emphasizing Euronymous’ motivations and adding a psychological terror element to the film. If you’re looking for a movie with a sympathetic protagonist, you’re not going to find it here. However, it still made for an extremely gripping film that sticks in my mind long after it is over, and Culkin and Cohen’s performances are both chilling and memorable. –Ali Shimkus