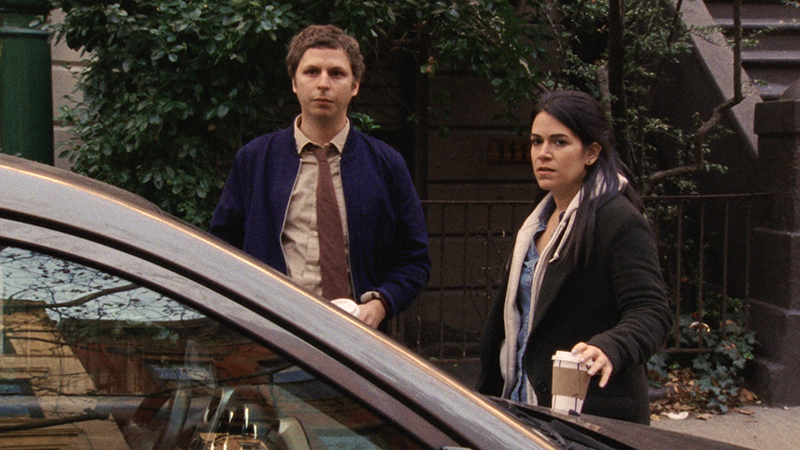 Michael Cera and Abbi Jacobson appear in Person to Person by Dustin Guy Defa, an official selection of the NEXT program at the 2017 Sundance Film Festival. Courtesy of Sundance Institute | photo by Ashley Connor.

Set over the course of a day, director Dustin Guy Defa’s Person to Person is a lighthearted ramble and ode to New York. Comprising a series of vignettes shot entirely in a nicely textured and nostalgic 16mm, Person to Person brings an unassumingly hilarious and real, life-sized take on several characters as they contend with both the humdrum and the unexpected.

Defa brings together a fantastically earnest ensemble cast in Person to Person. Abbi Jacobson plays Claire, an investigative reporter who spends her first day of work anxiously driving around the city and following leads with her boss, Phil (Michael Cera). During their venture, Claire and Phil try to break a story on a potential murder. They do so by clumsily tailing the victim’s nervous, newly widowed wife—and the police’s primary suspect—played by Michaela Watkins. Along the way, they meet a clockmaker (Philip Baker Hall), who works quietly and diligently, clearly prefers to be left alone, and humors his friend Buster’s (Isiah Whitlock Jr.) Frank Sinatra impressions.

It’s obvious that Phil is into Claire, and his blunders as he tries to impress her are both comical and painfully real (like blasting his metal band’s music in the car—“I play bass”). Jacobson easily makes Claire’s discomfort palpable, while Cera’s artless and hopeless Phil highlights the awkwardness, absurdity and senselessness of trying to forge a connection with another human being.

Two other storylines accompany Claire and Phil’s. There’s Bene, a curiously funny, diehard record collector, played sincerely by Bene Coopersmith. When Bene gets a call about a rare pressing of Charlie Parker, he buttons up his brand-new, bright-purple, patterned shirt and hops on his bicycle to start his day. With Bene’s story comes Ray’s. Ray is the in-the-dumps best friend living on Bene’s couch, amid records and houseplants. He’s mostly despondent and remorseful throughout the film, hiding out from his ex-girlfriend’s indignant brother after Ray, in a fit of heedless revenge, decided to upload his ex-girlfriend’s naked photos to the internet.

The final storyline is Wendy’s, which by the end feels every bit as pure and full of heart as does Bene’s. Wendy is a bright, seemingly cynical high-school student who is hyper-attuned to her struggle with feeling too much. Effortlessly brought to life by Tavi Gevinson, Wendy spends most of her time hanging out with her best friend, Melanie (Olivia Luccardi), but she’s sick of having to deal with Melanie’s intense make-out sessions with her boyfriend.

As the day continues at Defa’s playfully unhurried pace, each of our characters starts to find themselves in increasingly uncomfortable and unpredictable situations. To varying degrees, they start having to confront different aspects of who they are. Person to Person is a thoughtful, unpretentious film for those who are fans of watching unraveling situations that are so, so painfully real and humanizing that they become—at least for me—laugh-out-loud funny. –Kathy Zhou