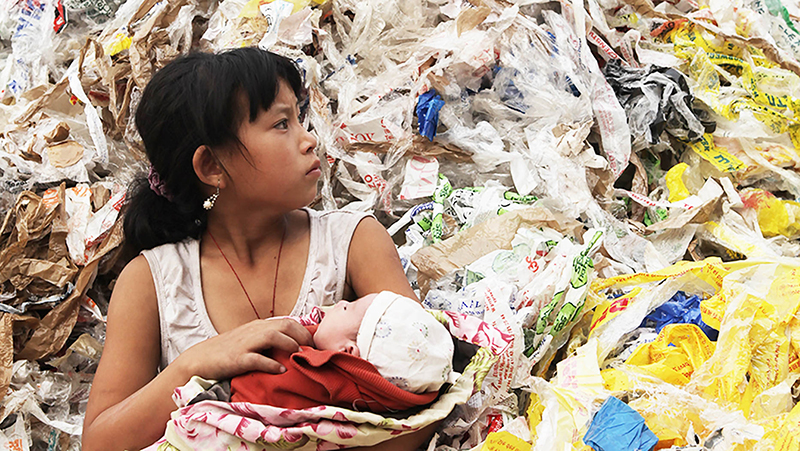 Plastic China features foreman Kun’s plastic-recycling facility. His family and a tenant worker family toil every day and live on very little. They reside among knolls of plastic waste and veritable mountains of work. They each have children, and they discuss whether they should or can afford to send them to school with what little money that they make. Kun can only manage to pay Peng $5–6 dollars a day, which causes him to complain and embitters him. Meanwhile, their children play among the plastic piles, and the eldest tend to the younger kids. Eleven-year-old Yi-Jie makes paper dolls out of images of people and objects printed in magazines. They mimic and make believe adult situations like typing on a computer or working with plastic and earning money. Nearby sheep eat plastic debris, and the kids fish for dead fish in water and eat them later with their families.

Plastic China is less about the plastic-recycling industry and more about the difficulty for this proletariat/petit bourgeois outfit to get by, let alone ascend financially and prosper. Kun and Peng dispute about wages and about enrolling Peng’s daughter Yi-Jie into school. Kun acknowledges that he has nothing beyond a farmer’s upbringing and skill set, and Peng has worked at the facility in light of arthritis and a subsequent physical inability to perform jobs for which he may be suited otherwise. He’s also an alcoholic. He had never gone to school and prides himself for it. Kun aspires to advance in his life and proved whatever amenities he can for his family, whereas Peng struggles with his income, about to have his fourth child with Kun’s frequent admonishment of his beer purchases. They become foils to one another in their common struggle to survive: Peng is content to subsist, and Kun reaches to expand his family’s lifestyle. Kun tries to coax Yi-Jie into admitting her desire to attend school as Peng stubbornly dismisses the notion and blithely declares that she’ll begin her education in Sichuan, their hometown. These opposing forces present the lower class imploding in on itself as ideologies clash and subdue the common struggle between these two families.

Since Plastic China examines these families’ lives on a real-world level, some of the broader implications subside. We come to learn that China largely receives plastic waste and that Chinese taxation precludes such business owners (and employees) from getting ahead financially. This information arrives in the form of subtle captions onscreen as not to interrupt the visual alchemy of the families’ story. We connect with them through this method on a personal level, which is one of Plastic China’s strengths. At the same time, it feels as if we miss out on a larger connection to some global or Chinese-national issues that may be the root of our characters’ malaise. As far as the storytelling element goes, Plastic China compels us to sympathize with its subjects. In the way of the conversation in which the film seems to participate, however, the “why” factor eludes us.

In spite of this disconnect, the children of the film incite laughs and draw our affection. Their imagination among the millions—if not billions—of pieces of plastic constructs an ephemeral ambience that we must honor. As their parents labor to situate a viable standard of living for them, these kids conjure makeshift utopias against the grain of reality. Watch this film for them. –Alexander Ortega