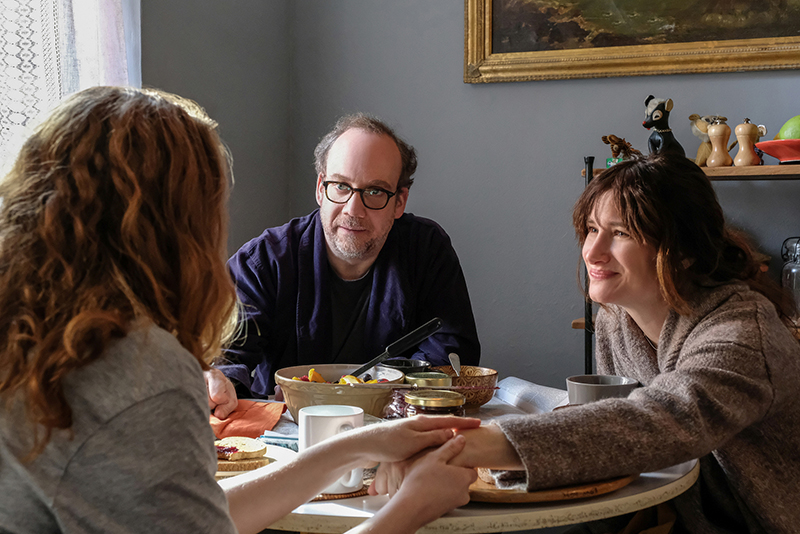 In Sundance premiere Private Life, Rachel (Kathryn Hahn) and Richard (Paul Giamatti) have become obsessed with getting pregnant. In their 40s, they struggle with Rachel’s low production of eggs and Richard’s low sperm count due to only having one testicle—a quip frequently but deftly used for comedic effect throughout the film. Richard’s brother loans him money for different kinds of treatment, with sums as exorbitant as $10,000, while his wife, Cynthia (Molly Shannon), chides them behind their backs for becoming so absorbed with this endeavor. Richard and Rachel live a New York bohemian lifestyle as writers and dramatists, and with limited capital to find a solution, they’ve become desperate. Oscillating between alternative methods for conception and adoption after having been ghosted by a fraudulent birth mother, they turn to the prospect of egg donation.

Hahn and Giamatti perform synergistically, convincingly, relatable—a pair whose tension and moments of vulnerability endear us to Rachel and Richard. Richard is matter-of-fact but gentle. Rachel is nervous and irascible—likely because of all the hormones coursing through her body due to fertility treatment—cursing the failures of their pregnancy attempts and Richard’s physical attraction to a potential egg donor, who also happens to serve them brunch at a local restaurant. With the stress of choosing an egg donor, they wish that they could find a young woman close to them without having to undergo donor courtship on the internet. Then they remember Sadie (Kayli Carter).

Cynthia’s daughter, Sadie has left school to complete her degree in absentia. She reels from Cynthia’s overbearing nagging with regard to achievement, and idolizes her stepdad’s brother, Richard (“Uncle Cool”), and Rachel because of their authenticity via their careers as artists. Wanting to stay in the city rather than return home to live with Cynthia and her stepfather, she serendipitously opts to stay on Richard’s and Rachel’s couch. She’s naïve but young—young enough to be a prime egg donor. At dinner one night, they’re surprised but excited when she accepts the offer minutes after their proposal.

Private Life feels as long as its 132-minute runtime, but not a second is wasted in its measured storyline. It’s mostly linear, with each interaction between characters leading from one to another while its emotional hues inflate and percolate. The actors are all on fire in Private Life. Carter’s plucky portrayal of Sadie counterbalances Rachel’s and Richard’s disenchantment, and Shannon unequivocally thrives as an uptight mom with a striking performance. It’s Hahn, though, who’s completely magical in the role of Rachel, which allows her to be funny but broken; artful but distracted; in love but frustrated. In a fragile nexus with Richard and Sadie, Rachel invests her hopes for a family. But will this experiment work?

I cannot underscore enough how Richard’s and Rachel’s multidimensionality propels into an effective narrative what could otherwise just have been a dual character study. Private Life charms with its mix of humor and melancholia, which wax and wane evenly. The pinnacle of the couple’s journey together, for me, is when Richard opens their door to trick-or-treaters wearing a Richard Nixon mask, stating that he couldn’t find his Bill Clinton one. When he closes the door, in her Hillary Clinton mask, Rachel hands him his rubber Bill getup. This objective correlative rounds out the film and makes an impression as to where the couple’s internal trajectories have come in addition to what we observe on-screen. This isn’t a feel-good movie, but it’s not a total bummer either. In fact, Private Life hits the spot at Sundance 2018. –Alexander Ortega