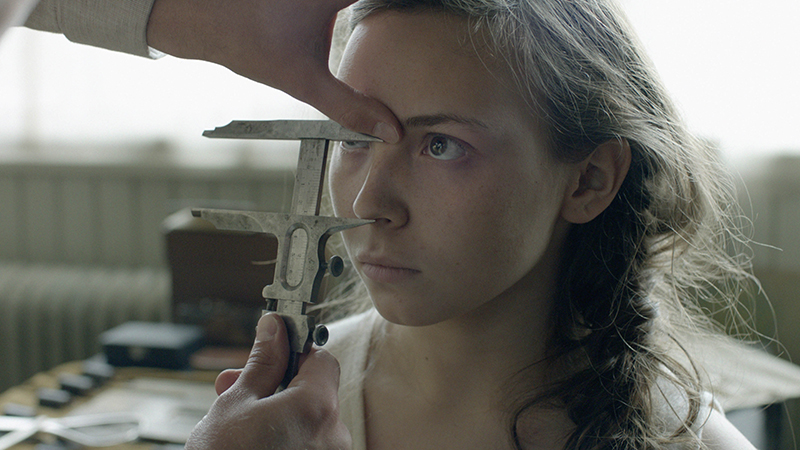 Elle-Marja (Lene Cecilia Sparrok) attends her sister Njenna’s (Mia Sparrok) funeral at the beginning of Sami Blood. The occasion brings her back to her hometown in the Swedish Lapland, home to the Sami, who are an indigenous, non-Swedish population. She bitterly tolerates their yoiking traditions (a type of song tradition) at the ceremony and decries their shrillness. Though her son pleads with her to stay in the reindeer-herding town, she fights it each step of the way. This sets the scene for her to look back on her estrangement from her sister, her family and her Lappish heritage.

A young adolescent, Elle-Marja and attends a Swedish boarding school in the 1930s with her sister, Njenna. During their walks to school, Swedish boys taunt them with racial slurs and dismiss them as being inferior because they are Sami. Amid their teacher’s corporeal punishment for even an utterance of the Sami language, Elle-Marja excels in her studies while Njenna struggles to assimilate into the archetypically European way of thinking and behaving. Their teacher commends Elle-Marja in front of the other children, and she develops a curiosity about the Swedish way of life. Against Njenna’s heed one night, Elle-Marja sneaks off to a dance about which some older, out-of-towner Swedish boys holler to her over a field. She meets Niklas there, and the two sneak off for some privacy and subsequent necking. Niklas invites her to stay with him back home—but Njenna has tattled on her, and she’s taken back to the boarding-school dormitories and whipped the next morning. From there, Njenna and the other children disown Elle-Marja as a Sami. She asks her teacher about opportunities to continue her studies in Uppsala—where Niklas lives—but her teacher declares that the Samis’ brains are not developmentally suited for city life. It’s then that Elle-Marja runs away for her Swedish adventure.

Lene nails her role as the young Elle-Marja. She toes the line of Elle-Marja’s emotional tug of war as the normative Swedish hegemony simultaneously leads her on and abuses her. At the boarding school, scientists measure her head and photograph her—a child—naked for what seems to be a social-Darwinist study, against whose dehumanization she recoils. In reciting Swedish poetry, however, she smiles with pride. Lene owns Elle-Marja’s naïve but unbreakable resolve to integrate into proper Swedish society as she invites herself into an urban school—and she pronounces her coming of age as she lies with Niklas and commands his affection. Being a child, Elle-Marja cannot muster up the funds to actually pay for her newfound school beyond her splash into it. She returns despondently back to her Lappish homeland with the real-world knowledge that she won’t be able to bridge her two worlds of the rural Sami and the globalized Swedes—at least not then.

Director Amanda Kernell and Lene avoid infantilizing Elle-Marja and allow her character to fight through the treachery of a racist/classist nation. Her agency in Sami Blood allows her to uncover the Sami’s societal limitations for the sake of the narrative, even if she cannot reconcile who she is and what she wants to be. In this, Sami Blood does justice for the Sami with grace. My one gripe was that the scoring is one-noted and doesn’t service Elle-Marja’s emotional course. That aside, the film is simultaneously a fulfilling story but not a feel-good one; it also brings attention to a marginalized population of which some may not be aware. Sundance chose well by including this in their “Spotlight” section, as Sami Blood continues to delight. –Alexander Ortega