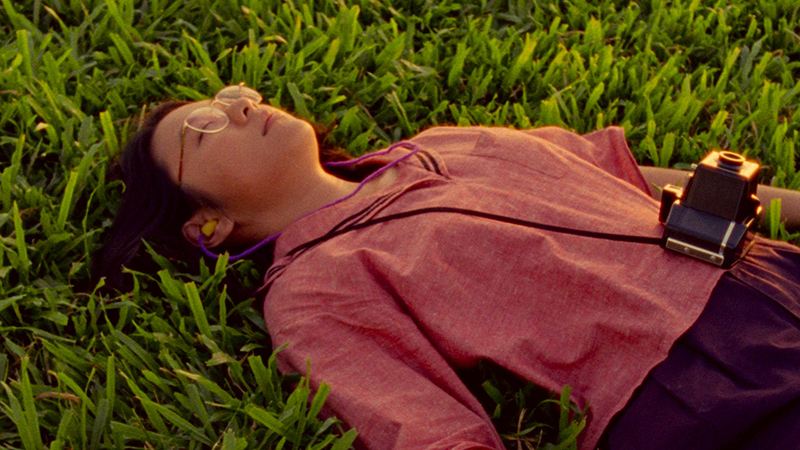 Sandi Tan might’ve been a strange teenager, but it was in the very best way. Growing up in Singapore, she published a zine and scribbled hundreds of handwritten letters and postcards. Mostly, she obsessed over film. She bootlegged VHS tapes and went on long night drives to talk French New Wave with her fellow teenage cinephiles, Jasmine and Sophie, and their film mentor, an American man named Georges, whom Sandi would later designate as her best friend. After Sandi moved to London for school—and Jasmine to NYC, Sophie to L.A.—she continued to write letters, ever consumed by the dream of making her own movie. She was DIY, and she was brash, but in a serious, idea-focused and maybe selfish way. And so, Sandi sat down at her computer and typed out an entire film script. It was 1992. “There were movers, and there were shakers.” For Sandi, there was Singapore’s first road movie: “Shirkers.”

After Georges’ unbridled approval of the script, Sandi enlisted Jasmine and Sophie to join her back in Singapore for over two months to film “Shirkers.” Shot on donated 16mm Kodak film (and, at Georges’ insistence, only during magic hour—!), “Shirkers” starred Sandi as S, a 16-year-old killer, and spanned dozens of locations and actors. When the production ran out of money, Sandi and Jasmine used up their savings. And after shooting wrapped, the three women went back to their lives outside of Singapore, entrusting all of the footage to Georges for post-production. Then, the devastating: Georges vanished with the footage.

It’s a lot of backstory, but two decades later, the 16mm cans were recovered, and that’s how Sandi Tan’s film Shirkers—this time, a captivating and earnest personal documentary—starts. In a sincere and singular voice-over, Tan, now an L.A.-based novelist, embarks in hindsight on a decades-long journey. With pieces from the archive—teenage photos, letters and animations, and “Shirkers” behind-the-scenes—Tan recounts the doomed making of “Shirkers,” interviewing old friends, Singaporean film critics and the like.

Tan dually searches for the mysterious, long-disappeared Georges, interviewing his other mentees and, remarkably, his widow. She certainly knew how it looked back then, a teenage girl going on long road trips with her strange, older, American mentor—but mostly, she just cared that they both loved film. She notes the somewhat alarming moments in her relationship with Georges, too: the bits of his peculiar flirting, the fact that he would never tell anyone where he was from, how she’d write him letters and rarely hear back (and, well, his absconding with “Shirkers”).

But the film is about far more beyond Georges’ enigma. Instead, Shirkers is so gripping and cloying a feat of personal documentary because of Tan’s search for herself along the way—the dreams, friendships and falling-outs—20 years on. She interviews Jasmine, now an NYC artist-activist, and Sophie, now a professor of film. Their present-day conversations veer from the fond and nostalgic to the strained and confrontational—to Tans’ realizations of her own shortcomings as a friend.

Shirkers revives at last, too, the once-buried video footage of 1992’s “Shirkers”: dazzling, almost candy-colored hues; lush, grassy fields; Singapore train tracks, sidewalks and cityscape lookouts. Often accompanied by a large dog, S (aka Sandi) traversed it all, outfitted with a pink shirt, Mary Janes, a camera and her smoking finger handgun. And, of course, here are Sophie and Jasmine, looking cool as ever between takes or announcing new ones with a clapper. (The Rookie-reading part of yourself couldn’t help but want to be their friend.)

There’s something immensely unblinking yet soft about Shirkers that makes it not so much rosy as it is life-affirming: the twisted fairy tale and fate of Singapore’s first road movie, the shrouds of mystery, the unearthed feelings, the reconnected friendships and revisited roots and dreams. Here in Tan’s documentary, the story of Shirkers is artlessly told. –Kathy Rong Zhou