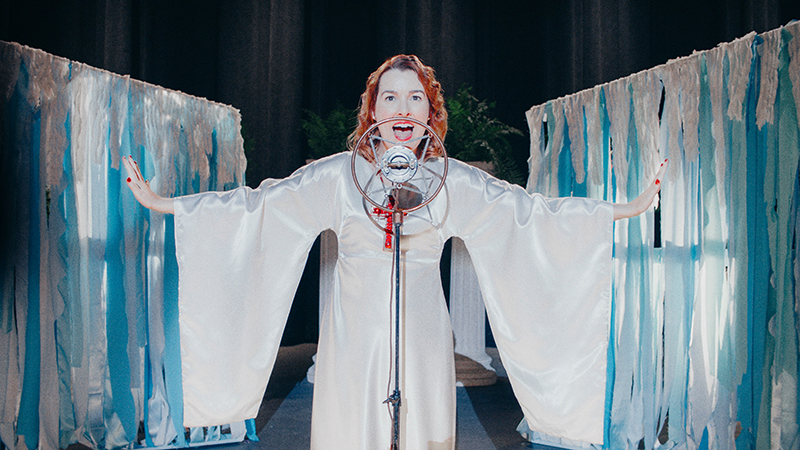 The story of Sister Aimee Semple McPherson, as told by the film Sister Aimee, claims to have 5 1/2% truth to it. The historically accurate 5 1/2% is this: Sister Aimee was a wildly popular evangelist who founded the Four Square Church in the 1920s. In 1926, she mysteriously vanished. She turned up 5 weeks later wandering around Arizona with the ludicrous story that she had been kidnapped and held in Mexico. The rest is speculation, and where director/writers Buck and Schlingmann explored the wild possibilities.

Sister Aimee, brilliantly played by Anna Margaret Hollyman, is a wry, straight-shooting woman who has had enough of her fame. As a leader of an evangelical church, she is expected to perform “healings.” With a little tap dancing to some song and dance, Sister Aimee has a penchant for healing those who aren’t able to walk. Following her married lover Kenny (Michael Mosley) on a whim to go to Mexico City, they link up with the rugged, mysterious Rey (Andrea Suarez Paz), who serves as their guide, translator, and protector.

Having the three vastly different personalities share the same car surrounded by the vast southwestern desert and the threat of being caught actually makes for more humorous moments rather than tense ones. Kenny, who fancies himself a writer of the common people, wants to write Rey’s true story, but she silently ignores his persistent questioning. Aimee, who seems to have no qualms about her kleptomaniac tendencies, steals a letter from a priest intended for Rey and snoops in her bag when she is asleep, motivated by self-preservation and sheer curiosity. Meanwhile, the detectives back in LA are starting to believe that Sister Aimee may have not have mystically “evaporated” in the ocean, as evidenced by the newspapers the group comes across with her face on the front of every cover.

I was surprised at how subtly, yet perfectly the jokes landed for a film about an evangelist set in the 1920s. Aimee makes for a very self-absorbed, conniving, yet still somehow likable protagonist, with the righteous, badass Rey teaming up with her for some interesting hijinks. Paz and Hollyman had an almost palpable chemistry; whenever Rey and Aimee found themselves in trouble, their almost telepathic communication translated into some clever, critical solutions. While I felt as though there were possibly too many single-scene side characters introduced throughout the film, I did like the way their individual stories all came out through their interrogations by the skeptical Detective Brown (Blake DeLong) and gullible Detective Smith (John Merriman).

For me, the sets and costumes, while simple, really told the story of who each character was while keeping to the era of the 20’s, never taking me out of that time period. The car Kenny, Rey and Aimee use to get to Mexico was a gorgeous, older model in pristine condition, and was almost a character in its own right—as it was the only car throughout the entirety of the film. This is even pointed out when a sheriff comes into a restaurant to ask Kenny if he is the owner of the car. Kenny responds “which one?” while the camera pans out to the car, parked completely alone on the street they are on. While the film never outright answers the question of whether Amy really is a divine healer or a charlatan, her musical number shows that ultimately, her job as an evangelist celebrity is to entertain the masses. Overall, Sister Aimee was a entertaining film with the unique purpose of exploring the very real personalities behind urban legends. –Ali Shimkus