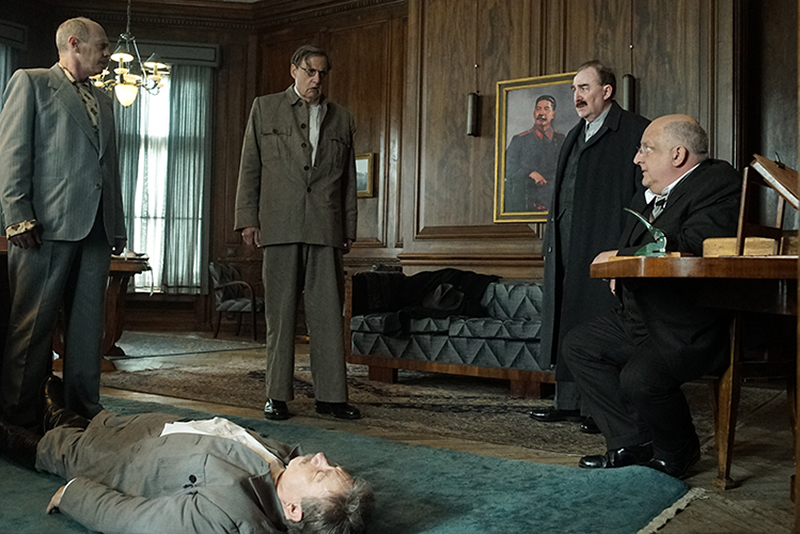 The Death of Stalin

It’s difficult to imagine humor in the midst of bleak, Soviet-era Russia during and directly after Stalin’s demise, but writer/ director Armando Iannucci seems to have found the way to effectively normalize and satirize the horrific events in Death of Stalin. Just prior to Joseph Stalin’s (Adrian McLoughlin) death, viewers watch as people are paraded down the street in the night with guns to their backs, as the people in Stalin’s committee struggle to keep themselves off of Stalin’s “lists,” based on which they will inevitably be killed, never to be spoken of again. However, as Marshal of the Soviet Union and chief of the NKVD, Lavrentiy Beria (Simon Russell Beale), gives the execution orders by tossing these lists into the hands of seemingly random soldiers. He does so in such a flippant, non-nonchalant manner that you can’t help but chuckle at the lunacy behind so many people’s deaths. Meanwhile, Nikita Khrushchev (Steve Buscemi) goes home to his wife after dinner with Stalin, having her write down everything he and Stalin talked about, and what Stalin laughed or didn’t laugh at, as a reference for later so that he never oversteps his boundaries with the man.

The absurdity of everyone’s actions due to fear—or later, out of a lust for power—make for some dark yet comical moments. For me, the scene following Stalin’s initial hemorrhage is one of the most brilliant scenes of the movie—Beria is the first on the scene after Stalin is discovered by his maid. Beria quickly goes through his dossier, taking documents, throwing files out the window to a solider in his command, burning other documents, all while Stalin is still (technically) alive, lying on the floor in a puddle of his own piss. As other members of the party come to his side, they take turns forcing themselves to cry over Stalin’s lifeless body and then accidentally kneel in said puddle, all while they debate whether or not to call a doctor, as Stalin has had all the “good” doctors exiled or killed.

For me, as the story goes along and the power plays of different members of the party start to take place, the comedy is put to the side a little. The stakes for each character get higher and more dangerous. However, there are still bitingly funny moments, such as when Khrushchev tries to switch places with Stalin’s successor, the ineffectual, image-obsessed Georgy Malenkov (Jeffrey Tambor) at Stalin’s funeral and make it “look like part of the ceremony” in order to exchange harsh words with Beria, who is standing on the other side of Stalin’s casket. Buscemi’s transformative portrayal of Khrushchev, from a nervous comrade who is trying to stay on Stalin’s good side to a scheming politician in a society where death is the consequence for even a tiny mistake, marks a visible change from the beginning to the end. Likewise, Beale’s portrayal of Beria as a conniving, murderous, slimy politician is at once both pompously funny and mortally frightening. Death of Stalin serves as a challenge to find the humor in most of the situations presented throughout the film, especially as people are constantly being casually shot around the main characters, but the fact that such power-hungry, self-involved people are left in charge of such a chaotic political climate lends for sardonic laughs. Even though the ending of the film is not historically accurate, it serves as an epic conclusion to the mounting tension between Beria and Khrushchev, and offers a very real lesson about the cyclical nature of politics and how fleeting power can be.