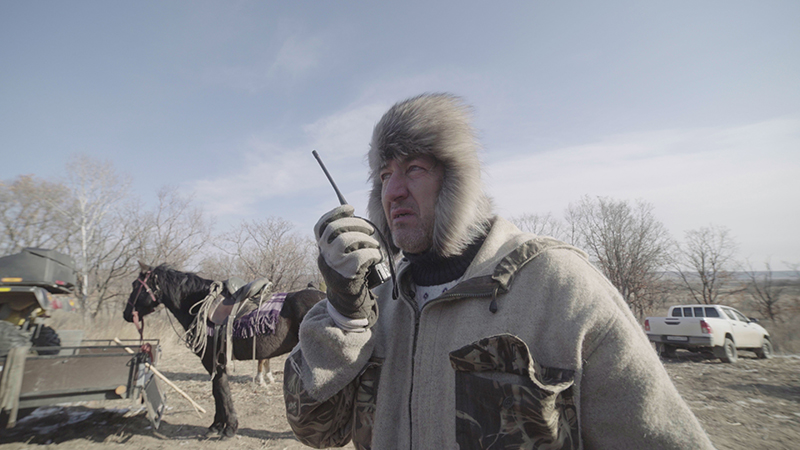 In both Eastern and Western imaginations and art, the tiger has always been a symbol of beauty and power. As their numbers dwindle in the wild, many people are moved to help their cause. Tigerland follows two parallel tiger conservation efforts: in far east Russia where Pavel Famenko works to protect Amur tigers, and in India, where the legacy of conservationist Kailash Sankhala lives on through his grandson, Amit Sankala and his great-grandson,13-year-old Jai.

In Russia, the tough-as-nails Fomenko is nearly reduced to tears as the skin of a dead tiger is spread across an operating table to inspect the pelt for bullet entries. For the team performing the autopsy, the goal is to figure out what angle the tiger was shot at in order to determine if it was shot for self-defense or as a result of poaching. It’s clear that Fomenko reveres the tiger as much as the Nanai people who reside around Bikin National Park, who consider the tiger a deity. Fomenko’s story becomes tangled up with a tigress and her two cubs who terrorize a small Russian village, killing one dog and maiming another. Fomenko and his team work against the clock to try to find the tigress and her cubs, with the intention of vaccinating them and moving them to a more remote location.

In India, Amit and nephew Jai study tigers in the national parks established through Kailash Sankhala’s life’s work, Project Tiger. Sankhala was a persistent and stubborn adversary to the Indian tourism industry, which attracted foreigners with tiger hunts. Sankhala wrote letters to the government asking for legislation to protect tigers. Eventually, Prime Minister Indira Gandhi, who shared Sankhala’s vision of saving the tiger, helped him enact the laws to protect tigers from poaching and hunting. Project Tiger has essentially turned Indian tourism from hunting tigers into reveling in their beauty in the wild.

It’s interesting to see how tigers can live in vastly different climates—I personally imagined tigers roaming the humid forests of India, but never imagined them in the snowy tundras of Russia. The sound engineering captured the natural music of both areas, and really spoke to how tigers move about in nature. In India, as Amit and Jai track a tiger moving through the national park, you can hear the details of all the insects and birds chirping while the deer and monkeys cry out, warning each other as a tiger approaches. In the midst of all that natural buzz, the tiger slinks through the brush, blending into the scenery and moving silently.

While I appreciated seeing the difference between the tiger species and the conservation efforts in different regions of the world, I did have a hard time mentally connecting what else these two stories had in common. While the India story was more about Sankhala’s legacy, the story in Russia seemed more dire and action-filled, as Fomenko’s team worked against time to save the tigress and her cubs, risking their own lives in the process. However, one message that came across very clear was how dire the situation is for tigers, and how, without these conservation efforts, tigers would have already been extinct in the wild. Tigerland will soon be streaming on Discovery, and Discovery is matching donations to Project C.A.T, an effort to further protect the tigers in Bikin National Park, up to $250,000 through the end of this year. More information can be found at projectcat.discovery.com—Ali Shimkus