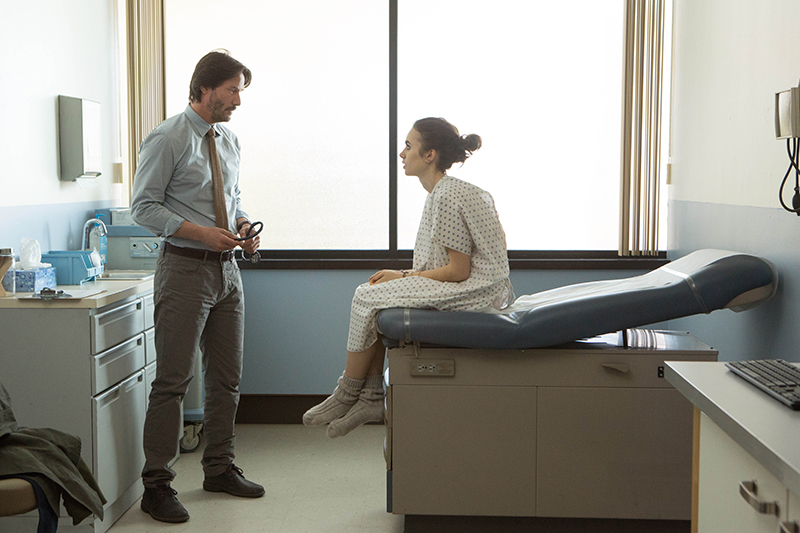 Keanu Reeves and Lily Collins appear in To the Bone by Marti Noxon, an official selection of the U.S. Dramatic Competition at the 2017 Sundance Film Festival. Courtesy of Sundance Institute | photo by Gilles Mingasson.

Sundance Film Review: To the Bone

All filmmakers inevitably find themselves in the uncomfortable position of choosing whether to please audiences or choosing to please critics. After checking out To the Bone, it feels like Marti Noxon has fallen into the trap of trying to please both. On one hand, it’s good to see filmmakers approach the issue of eating disorders in the way that To the Bone does. Noxon tells an honest story that succeeds in bringing its audience into the mind of Ellen (Lily Collins), a young girl struggling with anorexia. On the other hand, To the Bone also happens to come packaged with an odious amount of teen drama clichés, which threaten to drown out the gravity of Noxon’s focal point.

On the side of critical acclaim is the performance of Collins, who transforms her entire body into a slowly deteriorating shell. She also manages to gild Ellen’s pissed off, sarcastic wit with enough sympathy to keep us rooting for her to kick anorexia’s ass. Collins’ performance is reinforced by those of Carrie Preston and Lili Taylor, who play Ellen’s stepmother and mother respectively. Both actresses take their characters through powerful character arcs that provide excellent foils to Ellen’s character. Noxon’s screenplay also gives these talented performers many opportunities to dig into their characters. In this sense, To the Bone is a great vehicle for some strong actresses.

On the side of audience approval, it’s tough to decide where to start. Keanu Reeves does a fine job of portraying an unorthodox doctor who only offers his help to those that want to fight and live. While the edgy professional who plays by his own rules is a popular archetype, it’s also a tired one. The only archetype possibly more tired than the edgy professional is that of the charming British love interest, and To the Bone has one of those too. When Ellen decides to live in a group home full of quirky characters also seeking treatment (Yup. There’s also one of those), she meets this guy Luke (Alex Sharp, or the UK’s answer to McLovin).

Don’t even get me started on Luke.

Yes, he’s charming, and yes, he’s filled with the joy of living life to its fullest, but come on. I was mistrustful of Luke from the moment we learn that he’s the only dude in this group home, and grew even more mistrustful of him when he seems to be the only one thriving in this allegedly super-effective program. Even though his relationship with Ellen doesn’t quite go the way we’re expecting it to go, his overall presence feels like a disservice to the stellar female cast. I understand that having a romantic interest—especially a British one—is almost a necessity in films like this, but the film didn’t handle this particular instance with enough delicacy.

Granted, To the Bone (Luke included) will definitely appeal to the young adult audiences who fawned over Ansel Elgort and Shailene Woodley in The Fault in Our Stars, so it’s definitely a success in that arena. Critically, the film’s excessive use of overdone teen drama tropes is going to drag it downward to the negative zone.

Based on this assessment, To the Bone will remain a polarizing enigma when it receives a wider release. Here’s hoping that it will at least function as a suitable launchpad for Lily Collins, whose performance does manage to overshadow many of the film’s flaws.