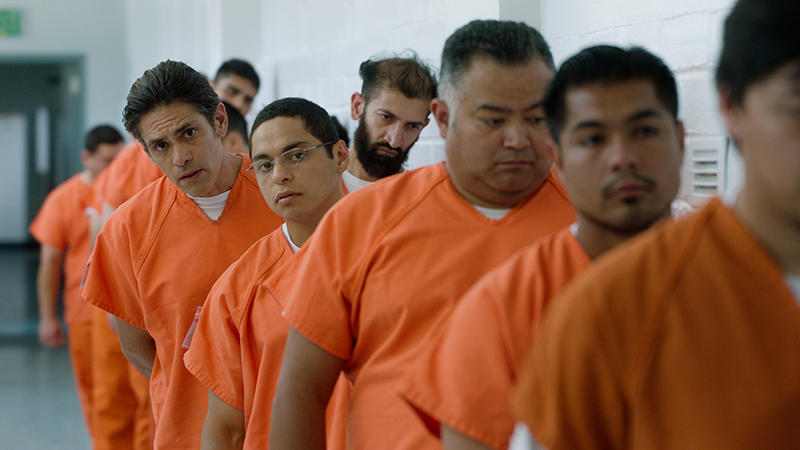 The Infiltrators is the stirring documentary cum dramatization about how members of the National Immigrant Youth Alliance (NIYA) helped aid in halting various deportations from the U.S. NIYA are an active immigrant-advocacy group that creates public awareness of people detained by ICE. They catalyze public outcry unto public officials who can call for the release of these individuals. In The Infiltrators, once NIYA organizer/undocumented immigrant Marco Saavedra and his cohort learn that Claudio Rojas has been detained by ICE at Broward Detention Center, they hatch a plan for him to infiltrate it to empower Rojas to work around being detained. What ensues is an inspiring, true story about the power and efficacy of grassroots activism, especially when facing the detention and deportation of undocumented people in the U.S.

Claudio was detained during the Obama presidency. According to the crew’s responses at the SLC Q&A following The Infiltrators, as much as it seems that the state of immigration law may have changed, it’s largely the same under 45. Detention centers strip undocumented detainees of any semblance of due process or sentencing, and people interned at such facilities may often stay in limbo there from months to years. Once NIYA members had discovered that outing themselves as undocumented doesn’t always necessarily lead to deportation, they learned that advocating for undocumented detainees with politicians—especially among Democrats who purport to be the friends of immigrants—often spurs releases down a federal chain of command.

The Infiltrators begins as Claudio is arrested and detained point-blank in front of his home. His son, Emiliano Rojas, had been stopped at a police checkpoint some time prior without an ID or documentation. When Claudio went to get him out, the judge essentially allowed Emiliano to stay in the U.S., but gave Claudio another deal: He had three months to leave the country. Claudio was long-established in the U.S. with his family and stayed, and ICE tracked him down. Hence, Emiliano contacts NIYA, who obliges to infiltrate the Broward facility to agitate from within to help Claudio secure his release.

We learn that other Broward detainees have escaped violence and severe political pressure and moved to the U.S. because of it. The government, however, hasn’t granted them asylum. Among a milieu of undocumented people from across the globe, Saavedra disseminates information for detainees to help them create a buzz both within and outside of Broward to resist deportation. Releases that allow the facility to share private information about detainees to the media, passive resistance like refusing to board a deportation plane and prompts for fasting empower the people at Broward to agitate the authorities of their facilities.

What’s more, Saavedra discovers that there’s a women’s half of the facility. NIYA organizer Viridiana Martinez submits herself to Broward to help Maria Soledad just as Saavedra helps Claudio. In concert with NIYA member Mohammad Abdollahi and other NIYA activists on the outside strategizing and sending in paperwork, Saavedra and Martinez rally and empower Broward detainees to the point where the facility and ICE are fed up to the point of letting them Martinez and Saavedra go—they aren’t used to dealing with “people who hold their head high,” as it’s said in the film. Ultimately, NIYA succeed in securing the release of a handful of detainees whose proverbial clocks for deportation are ticking.

All the while, reenactments of the proceedings “on the inside” guide the film’s narrative. The acting and depiction thereof are engaging and pair fluidly with the narrative of the real-life events. The sense of when this actually happened seems like it was more recent than it was, and I feel like it would have been more ingenuous to communicate its historical context toward the beginning of the film, and more directly. Nevertheless, the course of events in The Infiltrators lend themselves to being revealed in the context of the 2012 general election when they do in terms of the storytelling element.

I implore you to see this film because it’s eye-opening, informational, well-crafted and absolutely crucial for us to know these details about the detention of undocumented people and how to fight it. You can find out more about National Immigrant Youth Alliance and their services at theniya.org. –Alexander Ortega