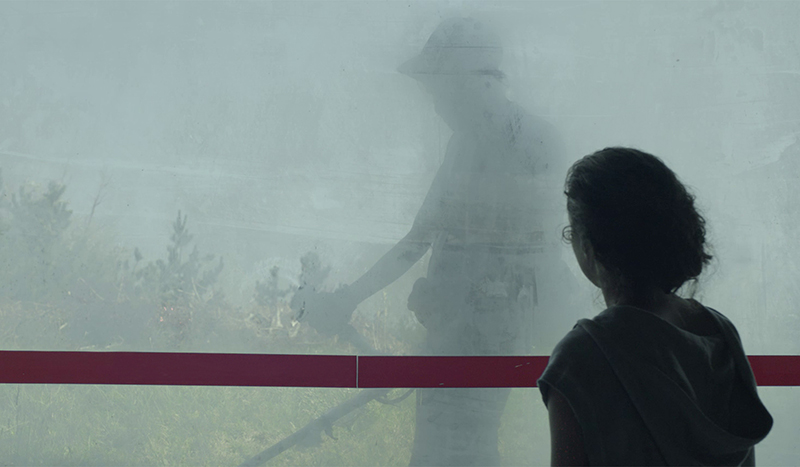 The Sharks (Los Tiburones) is a funny little film. It follows the teenage Rosina (Romina Bentancur) as she begins to dabble in working for her dad’s landscaping company in a small town in Uruguay. In the opening scene, she runs away from her father, who chases her to the beach. She’s injured her sister’s eye somehow, and the beach seems to have called her in that moment of crisis. As her dad coaxes her back ashore from shallow waters, she spots the dorsal fin of what she suspects is a shark, emerging slightly from the water.

In working for her dad’s business, Rosina has begun to fancy Joselo (Federico Morosini), a fisherman. She’s among a surly group of blue-collar workers, and Joselo seems to be close enough to her age for her to like him. One scene shows her ogling him, as he works, through a clear yet opaque wall—an establishing scene for her pursuit of him, which takes up most of the film. Joselo catches on to her liking for him, and soon invites her over to his humble quarters where he gets her to go to second base with him. In an awkward scene of sexual frustration—or perhaps sexual ignorance—he bids her adieu, and she begins her foray of winning his attention.

For the most part, unfortunately, The Sharks is all over the place with its story structure, images and what seem like they want to be inciting events. There are some competing subplots with her family that don’t add anything to the film’s central motives. Rosina’s desire is clearly to win Joselo over. The writing of her main rouse, kidnapping his dog, poses little to no potential as a catalyst for a connection between the two of them. It’s not until the dog, Ramona, escapes from where Rosina has tied her up that she actually forces a search activity with Joselo, which bears no emotional resonance. With Joselo’s persistent ambivalence toward Rosina throughout the entirety of The Sharks, the stakes are so low that I questioned whether the film was about Rosina’s pining for Joselo at all. For the majority of the film, I was mostly worried about Ramona, the dog.

Bentancur’s soft-spoken performance of Rosina works for the most part, however, there aren’t any scenes that demonstrate her emotional disposition toward Joselo, let alone any longing. Hence, the writing doesn’t provide any opportunity for Rosina to say anything besides doing cryptic things that leave the viewer guessing whether she has a ploy that’s related to Joselo.

The cinematography, natural lighting and photography in The Sharks is stunning, as it captures lush treescapes and waves crashing against rocks on beaches. It’s a shame that there’s so little significance to the characters’ goings-on to deepen the beauty of the oceanside setting. Moreover, the backdrop that there are sharks in the nearby waters ends up operating solely as a plot device in one instance. Since it’s a sensitive plot point, I will leave it there, but the fact that it’s two-dimensional—at best—is discouraging, especially since the film’s title suggests that it should have more thematic impact other than perhaps a correlation with Rosina’s and Joselo’s characterization.

The Sharks feels like it should have been a short film. Had some of the fat been trimmed, I could see its subject matter having more punch. That being said, I’m resigned to say that this one falls flat. –Alexander Ortega