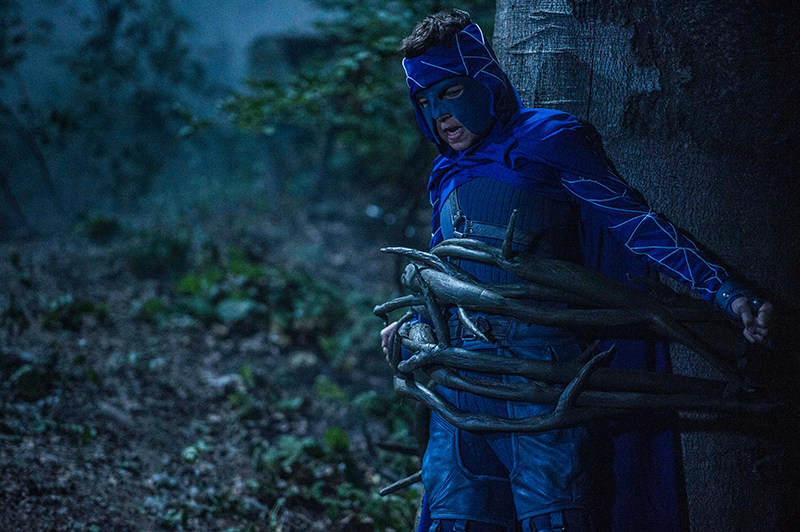 Jovan (Mihajlo Milavic) is a boy with partial cerebral palsy. His days are occupied by physical-therapy exercises when he’s not doing homework, but in his dreams and woolgatherings, he transforms into the blue-clad superhero Shade as he commands his imagination to fight dark evils in other realms. When Milica (Silma Mahmuti), a new girl at his school, is assigned to sit next to him in class, the two seem to be polar opposites. Jovan is shy and without a social life, and Milica is bossy, brash and tough. But as the class bullies continue to taunt Milica, the two warm up to each other and aid the other in moving past upsetting growing pains.

Jovan and Milica are quite a pair. Milica convinces Jovan that her father’s new girlfriend is a witch, seeing as how she feeds him sinister black salt, exotic mushroom potions (kombucha) and entreats him to contort his body in unnatural ways (yoga) with subsequent chanting (oms). Jovan quickly obliges himself to research the nature and ways of witches, and the duo soon forms a plot to kill this witch—albeit, cutely. In this quest, Jovan and Milica come up against circumstances that are bigger than themselves, which they must come to terms with in order to process them.

Milavic and Mahmuti each perform their characters superbly, taking root in their personalities and comportment. Jovan’s sensitivity and flares of courage are just as endearing as Milica’s devious revenge against bullies and her feistiness in general. Though Jovan is the central protagonist and the film anchors in his experience, THE WITCH HUNTERS does an excellent job at also conveying Milica’s struggle to accept her parents’ divorce. A particularly heartbreaking scene is Jovan defiantly trying to walk up stairs by himself in his physical-therapy class—something that he should do with help—then falls down, crying that he wants a new body. With their internal obstacles afoot, each kid sees the impending vanquishment of the witch as an opportunity to transcend the limitations of their reality.

THE WITCH HUNTERS also excels at allowing the child characters as much believable agency as it can without being too far-fetched. Jovan convinces his parents that there’s an early lesson at school, which neither of his parents can take him to—it’s the perfect opportunity for witch-hunt schemes with Milica (despite the fact that he ends up not showing because he’s afraid). Milica aptly takes advantage of her mother’s preoccupation with her dismantling relationship with Milica’s father, so that she can play with Jovan. Decisions like these help to amplify the the kids’ mindsets as denizens of their own world, and validates their line of thinking in finding imaginary solutions in order to cope with real-world problems.

As far as story goes, THE WITCH HUNTERS treats us to blooms of emotion from the leading roles, which reroutes the points at which we may think the narrative is leading us to the concluding witch hunt. It’s an inevitable plot point (perhaps the only flaw of the writing in THE WITCH HUNTERS). What the film takes advantage of is delaying its climax in order to explore the aforementioned emotional/physical hang-ups that Jovan and Milica feel with more depth, poking at these truly difficult situations. Additionally, Jovan’s imaginary fugues as Shade are relatable and palpable as he constructs inward reflections of the challenges he faces on a daily basis.

What’s more, the photographic direction and warm coloration of the film emulates the mystique of childhood. And though it’s lighthearted, THE WITCH HUNTERS offers a mature conversation about legitimate issues through the lens of young characters. You can’t go wrong with this one at the Sundance Festival or wherever you may have the chance to watch it. –Alexander Ortega