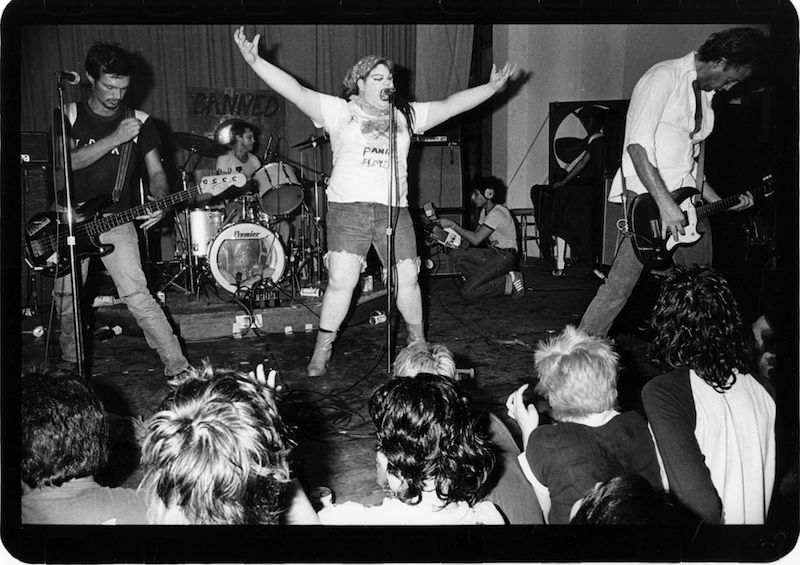 Review: The Dicks From Texas

The Dicks From Texas

Trekking the stories of one of the most underrated yet influential punk rock bands that became the harbinger for the hardcore and more notably, the queercore movement throughout the 1980s, The Dicks From Texas cites the band that made a splash in their hometown of Austin, TX and sent the waves crashing down on the dawn of hardcore punk. This 70 minute feature documentary provides an intimate insight into the weird, crude, and alienated legacy that was one of Texas’ first big punk bands—before Dave Dictor penned his first lyrics of slandering cops, and before Randy “Biscuit” Turner slipped on the infamous ballerina tutu with cowboy boots, the Dicks were redefining what it meant to be a misfit in an already rebellious subculture.

The Dicks was the brainchild of lead singer Gary Floyd who “started” the band after seeing the Sex Pistols in San Francisco and told everyone he had a band under that moniker. In Austin, the Dicks gained popularity as a “poster band” in which fliers were made for fake shows for non-existent bands to play. The Dicks, however, became a reality when Floyd teamed up with bassist Buxf Parrott, guitarist Glen Taylor, and drummer Pat Deason making their debut performance on May 16, 1980 at the Punk Prom with fellow Austin punks Big Boys. Floyd’s outwardly gay and flamboyant personality was reflected in his stage presence in which he’d sport the tackiest, ugliest, thrift shop dresses, plus-size pantyhose, and intentionally whorish makeup with a purple mohawk to round it out that would make anybody of a sound mind gape in awe. The idea, of course, was to play some of the loudest, fastest, and scariest music and have the lead vocalist look so bizarre and so outlandish that it would just emphasize that nobody could fuck with them—they were challenging a lot of political, social, and sexual conventions through their performances. Ian MacKaye put it best, “They were a force to be reckoned with.”

The Dicks stayed as an active band for four consecutive years before ultimately disbanding in 1986. Their discography, consisting of a 7” entitled The Dicks Hate the Police and two albums— Live at Raul’s, their split live album they did with Big Boys and Kill From the Heart,  which all became inspirations for punk’s most important era. The Dicks were instrumental in shaping not only the sound of hardcore, but also the attitude—the fact that you can have an even more intimidating presence when your dressed in drag and screaming songs like “Bourgeois Fascist Pig” and “Dead In a Motel Room.” Being comfortable with yourself and not conforming in such a way that you stick out like a sore thumb are what the Dicks lived by back then and still hold true in their views today.

The Dicks From Texas pays tribute in the best way possible to a band like these guys—it’s raw, unpolished, and choppy in some places, the lighting and audio isn’t perfect, the live footage is all bootlegged, and you definitely get the feeling that it went through a single editing process in someone’s basement. But, you know what? That’s punk rock! And that was the Dicks! In my opinion, the style of this documentary correlates well with the Dicks and their DIY aesthetics, which is the way it should be. –Eric U. Norris