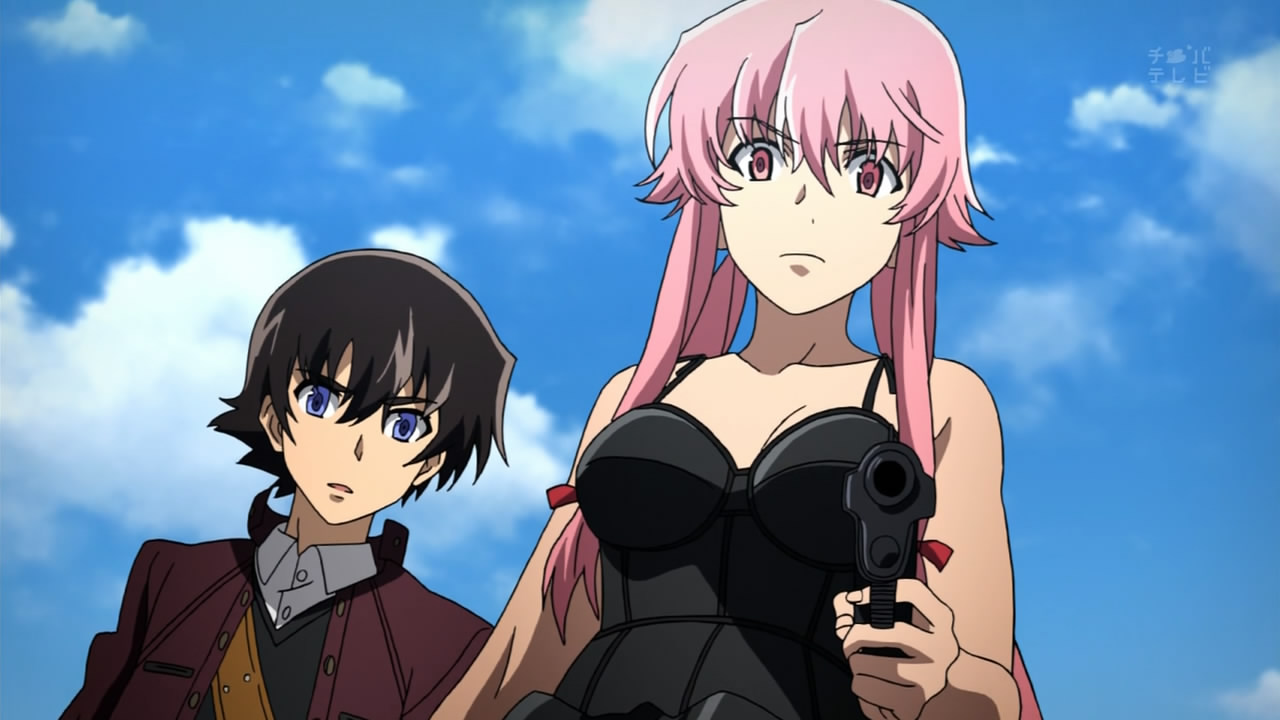 The Future Diary (or Mirai Nikki as it’s known to most people) is somewhat infamous in the anime community. The series gave us Yuno Gasai, the poster child for the yandere character trope—characters who take their affection to disturbing and often violent extremes.

This Blu-ray contains the entire series, assorted shorts and commentary from the crew, and textless versions of both the opening and closing themes of the show. Clocking in at 26 episodes, Future Diary is pretty average in terms of anime length, and it doesn’t overstay its welcome.

Future Diary follows the misfortunes of Yuki Amano, an antisocial high-school student who spends far too much time on his phone. Yuki has a plethora of imaginary friends, the strangest of which is Deus Ex Machina, an enigmatic creature that claims to have power over time and space. The twist that the first episode reveals is that these imaginary beings are very much real, with the ability to confer special warnings about the future to chosen individuals. Yuki’s phone starts to describe events surrounding him that haven’t happened yet, and while he initially uses this to his advantage, things take a turn when the phone predicts his death.

Enter Yuno with a clairvoyant phone of her own, dragging Yuki along with her and changing the events of that afternoon and preventing his death. Yuki learns that he’s been selected as part of a devilish Survival Game. Eleven others have been chosen to receive a Future Diary like his, and are told to kill each other for the right to succeed Deus Ex Machina as the new ruler of time and space. Of course, even though they’re technically opponents, Yuno won’t let anything get in the way of her relationship with Yuki.

Future Diary is an enjoyable ride with well-deserved popularity. The concept is fantastic, and the ways in which each diary wielder’s powers are manifested keeps things interesting through the entire series. The dynamic between Yuno and Yuki is especially enjoyable to watch, since ostensibly the only way their relationship can end is with one of their deaths so the other can win the Survival Game. There are twists and turns along the way that kept me watching, and almost every single episode ends on a cliffhanger of some sort.

The animation in Future Diary is solid, and the art style complements the dark atmosphere of the show. The opening and endings aren’t particularly memorable, but they’re good moments for you to mentally prepare yourself for the next episode. Voice work from the Japanese cast is great. I generally preferred watching in Japanese with English subs, since Funimation’s dubs can be hit or miss in terms of quality.

Future Diary isn’t without its minor issues. At times it seems like it’s trying a bit too hard to be dark and edgy, to the point of neglecting character development at times. There are a few instances of nudity that don’t really add anything to the overall experience except for some odd and brightly colored nipples, and the gore was a bit over the top at times. I also had a hard time feeling any sympathy for Yuki for quite a few episodes, and had to resign myself to the fact that one of my favorite diary wielders (a level-headed police detective), would eventually end up dead just so that Yuno and Yuki could be together at the series end. There are definitely worse series out there that you could watch, and if you were looking for something to watch, this cornerstone of psychotic anime would definitely suffice. It won’t take too much of your time, and you’ll finally be able to recognize that disturbing looking pink-haired gal you see cropping up on your Tumblr dashboard.