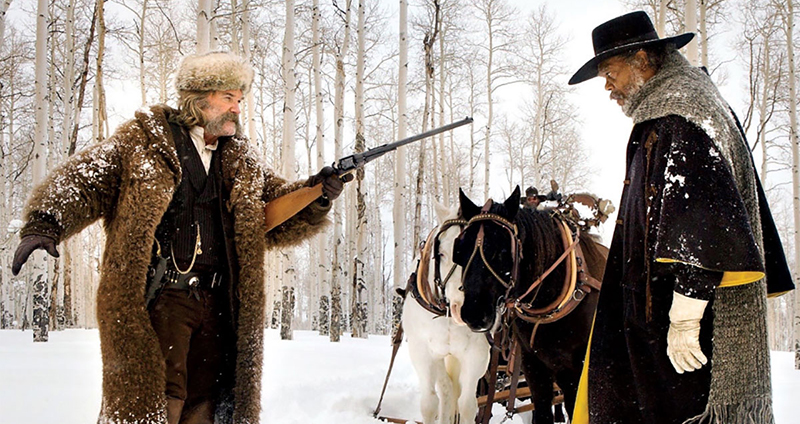 The Weinstein Company
In Theaters: 01.06

Normally, when I’m told that the running time of a motion picture is more than three hours long with an intermission, I begrudgingly saunter into the theater and prepare for sheer boredom. However, when said three-hour motion picture is the eighth feature film directed by Quentin Tarantino, they couldn’t turn off the lights and fire up the projector fast enough! Returning once again to the Western genre, Tarantino introduces us to the bounty hunter John “The Hangman” Ruth (Kurt Russell) as he transports Daisy Domergue (Jennifer Jason Leigh) to Red Rock to face justice. Along the way, he picks up Major Marquis Warren (Samuel L. Jackson) and Sheriff Chris Mannix (Walton Goggins), and they eventually end up at Minnie’s Haberdashery to avoid an impending blizzard. Inside, we’re greeted by Oswaldo Mobray (Tim Roth), Joe Gage (Michael Madsen), General Sandy Smithers (Bruce Dern) and Bob (Demian Bichir). Ladies and gentlemen, I give you The Hateful Eight. What proceeds is a “Who Done It?” murder mystery in a room full of liars. Everything from the cinematography shot on gorgeous 70-mm. film to the mesmerizing score written by the legendary Ennio Morricone, Tarantino transports the audience to a different decade of filmmaking with dialogue only the man himself can produce. In reverse style of his 2003 Kill Bill films, the first half of this journey is almost entirely dialogue and character development, yet the time whisks away, and you’d never think that 90 minutes had already gone by. In the latter portion, Tarantino reminds us that he’s still a fan of ridiculous amounts of blood spewing from victims and exploding craniums. The stand-out performances come from the always-entertaining Jackson, who is given one of Tarantino’s most well-written monologues, and the former star, Leigh, who could easily win the Best Supporting Actress award for her stunning performance as a criminal willing to do anything it takes to stay alive. –Jimmy Martin