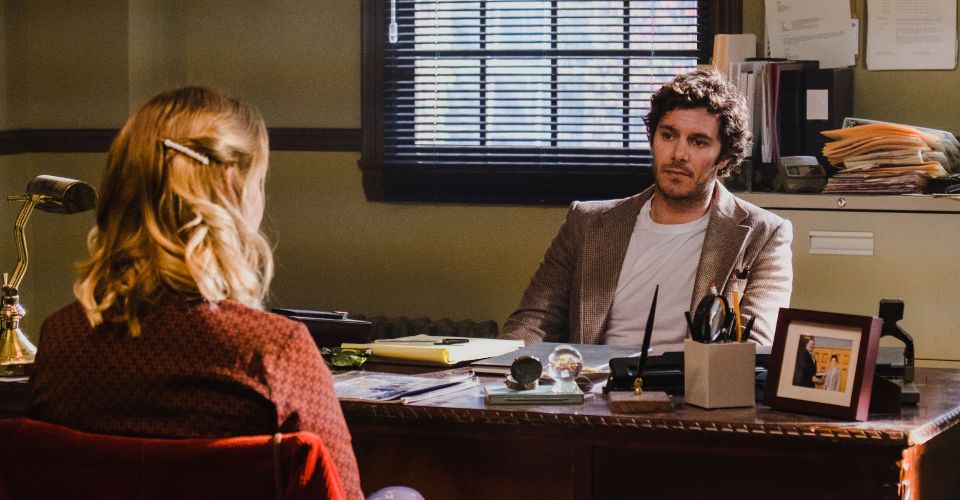 Never judge a book by its cover, or a movie by its trailer.

Adam Brody (The O.C., In The Land of Women, Ready or Not) stars as the title character in The Kid Detective, a darkly comic thriller based around the premise of looking in on the career of an Encyclopedia Brown–style boy genius when he’s grown physically into an adult, but has never developed past being the neighborhood sleuth. It’s a very funny premise (one in fact that my brother and I were once developing as a script treatment), and it could have been taken in a number of directions. But writer-director Evan Morgan chose a route that I must confess I never saw coming.

Abe Applebaum (Brody) is 32 years old, and he now has an office instead of a treehouse, but he’s still largely solving the same trivial little mysteries that may have made him a local celebrity as a preteen, but they just make him a joke now. The school bully still has it out for Abe for busting him when they were kids and beats him up on occasion, and many of his cases still come from parental tip-offs. But Abe’s general state of arrested development might just be getting shaken up when a high school senior named Caroline (Sophie Nélisse, The Book Thief, 47 Meters Down: Uncaged) hires him to find out who murdered her boyfriend.

For much of its 96-minute runtime, The Kid Detective plays like a Shane Black movie, with some hilarious moments and a brilliant performance by the perpetually boyish Brody, who gave a memorable cameo appearance as a literal boy trapped in a man’s body in Shazam!, and creates a classic character here. Morgan perfectly captures the world of the types of books that inspired this story, but moves them into a cynical, R-Rated world.

But just when you’re settled in and it seems like he’s all geared up to create a cult-favorite noir comedy in the tradition of Kiss Kiss, Bang Bang, Morgan pulls the rug out from under the viewer to reveal an altogether different film. I don’t want to go get into spoiler territory, but sensitive viewers should be prepared for a shift from Shane Black to Dennis Lehane (Gone Baby, Gone), and the movie ends up being surprisingly disturbing in a way that is likely to stick with viewers, whether they want it to or not. It’s a daring choice, though whether it was the right one can be endlessly debated.

The performances are dead on, with Wendy Crewson (Air Force One) and Jonathan Whitaker (The Expanse) getting some great moments as Abe’s frustrated but supportive parents, as do Peter MacNeil and Maurice De Wint as the High School Principal and Abe’s former mentor, Constable Clearly, respectively, and Sarah Sutherland (Veep) is amusing as Abe’s goth secretary, Lucy.

Nélisse, as the doe-eyed and trustingly innocent Caroline, pairs perfectly with Brody’s world-weary but immature protagonist, making for marvelously odd dynamic that is stereotypical of a film noir but just a bit off in all the right ways.

The Kid Detective is hard to recommend but impossible to dismiss, one of the most unique movies of the year and one that I personally found to be creative, intelligent and bold, but which also kept me up at night. It’s also one which I can see some audiences thoroughly hating, and I even sympathize with that point of view. But there’s a marked difference between a film that doesn’t know what it wants to be and one that refuses to conform to a genre label, and this one belongs in the latter category and deserves kudos for it. It packs a powerful message about lost innocence and the reality that violent crime is never a game, no matter how much you may love puzzles. It’s an edgy and memorable feature debut from a promising filmmaker. –Patrick Gibbs