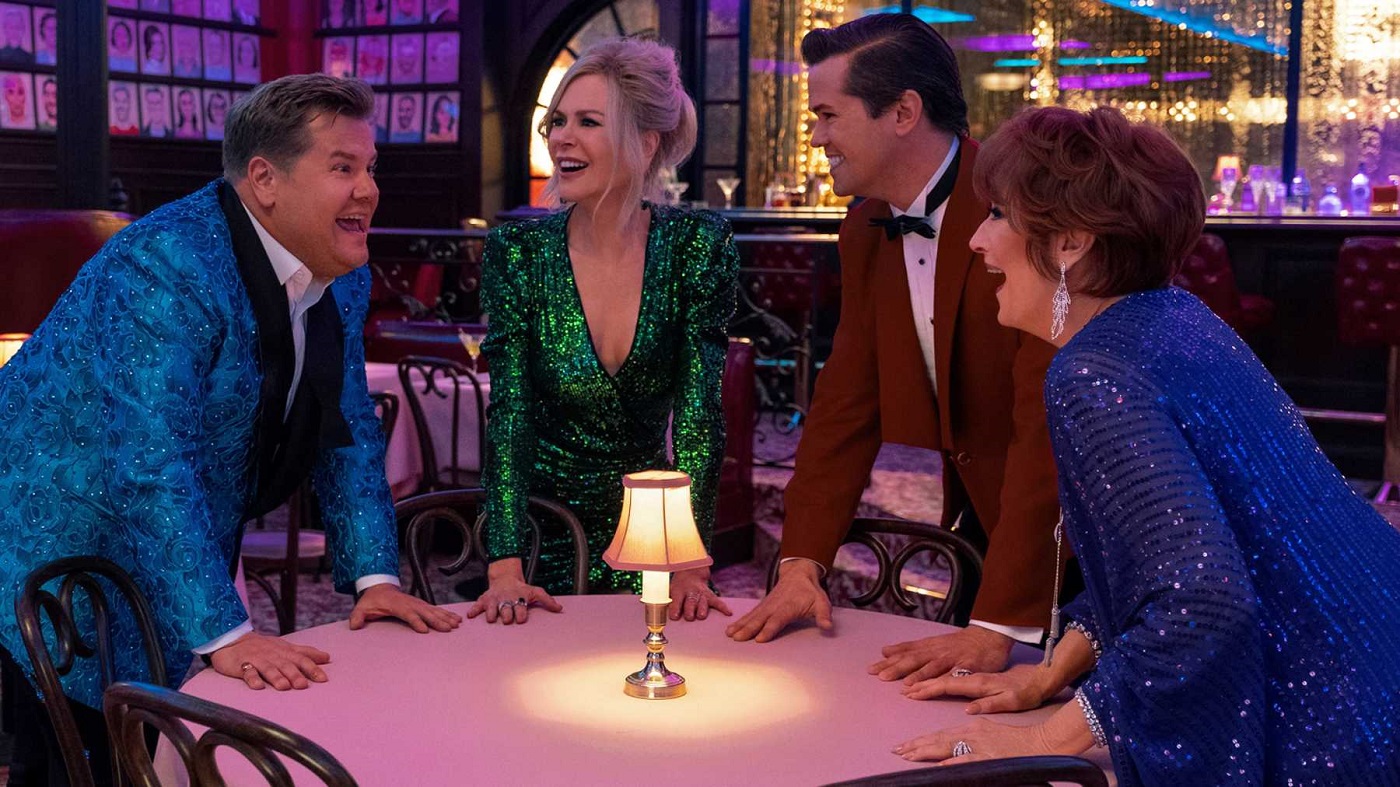 I haven’t exactly made it a big secret that I’m not a big fan of Ryan Murphy’s television efforts. I often find them to be a constant barrage of cheap, over-the top-melodrama that can be addictively entertaining in a junk-food television sort of way, but which revel in tawdry excesses and insulting the intelligence of their audience. It was with no small degree of trepidation that I entered The Prom, Murphy’s feature directorial debut, an adaptation of a largely forgotten Broadway musical.

The story centers around a group of stage stars from New York who all feel the curtain coming down on them. Dee Dee Allen (Meryl Streep) and Barry Glickman (James Corden) just opened a new musical that was cut short by scathing reviews, many of which took pointed aim at the stars themselves—one critic characterizes them as narcissists. In order to save face and their careers, they determine that they must find a cause to champion to prove their selflessness and get some good press at the same time.

Enter Emma Nolan (Jo Ellen Pellman), a high school senior in a small town in Indiana who planned to attend the prom with her girlfriend. But the head of the PTA, Mrs. Greene (Kerry Washington), unable to legally ban them from attending, has canceled the prom altogether, and the story is going viral. When Dee Dee and Barry decide that Emma’s predicament is the perfect cause to help resurrect their public images, they hit the road with their friends Angie (Nicole Kidman) and Trent (Andrew Rannells, The Boys in the Band). But their self-absorbed celebrity activism blows up in their faces, and the group has to do some serious searching if they hope to make things right.

Murphy the director is an undeniable talent, and he’s not only assembled a killer cast, but been wise enough to hire one of the best, cinematographer Matthew Libatíque (Black Swan, Iron Man, A Star is Born), to shoot it. It still feels a bit like a made-for-TV movie much of the time, but really good one. And while it’s heavy handed and about as subtle as a Hot Dog on a Stick uniform, it has something that Murphy hasn’t been able to successfully channel since halfway through the first season of Glee: an element of sincere sweetness.

Throughout The Prom, the cast is having a blast, and it’s utterly infectious. Streep is hilarious, making a divine diva with some absolutely show-stopping numbers, and Corden puts the memory of Cats behind him with the performance of his career, one which could easily nab him a Best Supporting Actor nomination. (And if you didn’t catch what I did there with the whole “Memory” of Cats line, please play closer attention, because it was pretty damn clever. I come from a theatre background, and like all artistes, I crave the adulation and applause of the common masses.)

Kidman and Rannelis each have fantastic spotlight numbers to strut their stuff, and the over-exposed yet underrated Keegan Michael-Key, appearing in his second Netflix musical of the season after Jingle Jangle, also deserves Oscar attention for his delightful turn as the supportive high school principal. Pellman is lovable as Emma, and has a wonderful voice, and Ariana DeBose gets some nice moments to shine as Alyssa, Emma’s girlfriend.

As is the case with most Broadway musicals, The Prom is a bit too long, and trying to temper this leads to a fatal flaw: Murphy chooses exactly the wrong Corden song to cut for time and relegate for the ending credits. The song that’s been cut is integral to the ending working, and perhaps the single most crucial character moment is rushed and completely unconvincing as a result. Some will disagree with me on this assertion, but while the number “Barry Is Going to Prom” is fun, it’s more self-involvement in a movie that’s full of that, and it should have been the one to go.

It’s not perfect, but The Prom is a rousingly enjoyable romp that tugs at the heartstrings and presents a very worthwhile message, even if it kind of hits you over the head with it. While I submit that Happiest Season is the better film on the LGBTQ+ subject matter, this may be more of an awards darling—at the very least, it will clean up at the Golden Globes—but two family-friendly movies with messages of equality and inclusion at the same time is not only welcome, it’s something that I believe audiences need right now. The Prom is sure to be instantly beloved by most of the musical crowd, though it may not reach The Greatest Showman levels of adoration here in Utah, it is still likely destined for plenty of living room standing ovations. –Patrick Gibbs