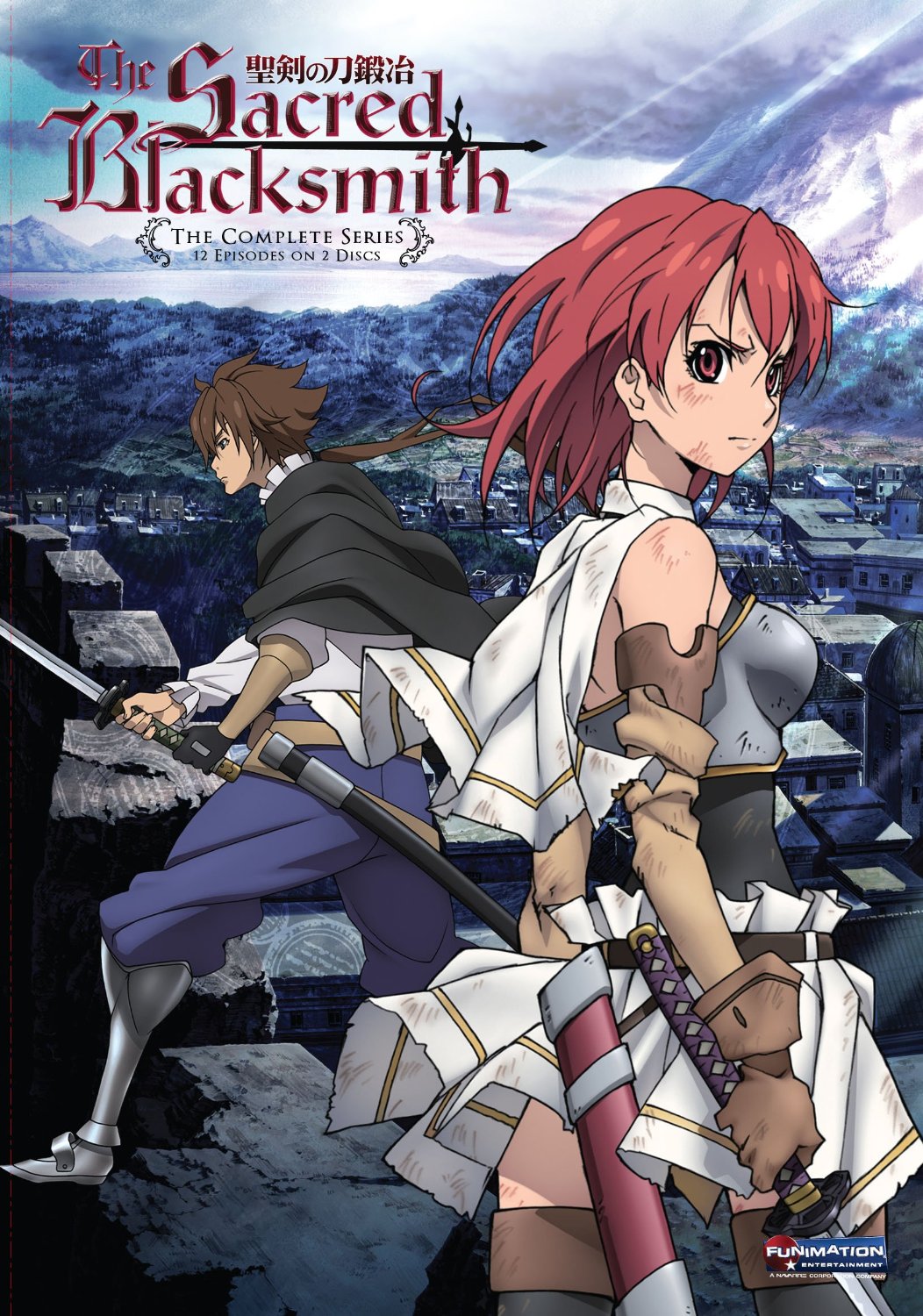 The Sacred Blacksmith follows the journey of Cecily, a newly dubbed knight who has set out to honor her family name by serving in the knight’s guard and protecting the town she grew up in. In the line of duty, Cecily’s sword—passed down through her family—is broken and she seeks out a blacksmith to repair it. She meets Luke, a young sword maker whose weapons cut through other blades like butter. Cecily and Luke soon find themselves beset by demons and in the middle of battle, they conjure a mystical forge to create a sword that is able to easily defeat these seemingly powerful demons.

The Sacred Blacksmith seems to have an identity problem. I can’t tell if the show wants to be a serious anime with a few lighter themes, and just doesn’t walk that line well, or if it just has no direction. Here you have a female protagonist, Cecily, who is introduced as a knight and a keeper of the peace, but is dressed as maid with a chest plate as her only battle armor. She’s immediately defeated in her first battle and has to be saved by Luke, so their whole relationship is based off of him saving her and her begging him to make her a sword. Then there’s Luke, who comes across as very unlikable. He could be an interesting and reluctant hero, but every time you think he’s going to come out of it and be awesome, he’s either made to be the butt of some random joke, or he just says some asshole line about how girls are dumb. So the entire time The Sacred Blacksmith hints at further unseen depth in the character and then never reveals it.

I think that the biggest problem that The Sacred Blacksmith suffers from is that it wants to be both as complex something like Full Metal Alchemist, but it wants to be as approachable as something like Pokèmon, which causes so many discrepancies in tone. We have a potentially interesting lead character in Cecily, but then there are these sporadic references and jokes about how large her breasts are, and how Lisa wants to be as busty as she is. You have Demons and evil warlords and all sorts of sword-and-sorcery staples, but then the series tries to be funny—and not in a way that fits with the rest of what’s going on.

So many of these characters, when they’re being made to be consistent, are strong enough to be built upon as the series continues. Hopefully we get a chance to understand the better-developed version of the characters. The production team could also avoid the rough unfinished feel of these early episodes and maybe fall into better production rhythm that gives them a more polished show.

Maybe the highlight of the show and possibly the best motivation to keep watching is the opening and closing theme songs. Opening with this rock opera of a song called “Justice of Light” sung in all Japanese except right at the end when it finishes with, “Justice of Light.” The closer is this wacky manic tune accompanied by a little slapstick cartoon that doesn’t seem to have anything to do with the storyline of The Sacred Blacksmith.

Ultimately, I feel like I spent most of the time watching The Sacred Blacksmith wishing it was better than it was actually was. The animation was fairly standard at its best, and the story kept making promises that never got paid off, or at least didn’t hold my attention well enough to care if I got there. I believe anime fanatics will have a good time with this, but I can’t see this ever being held up as a high achievement of the genre.