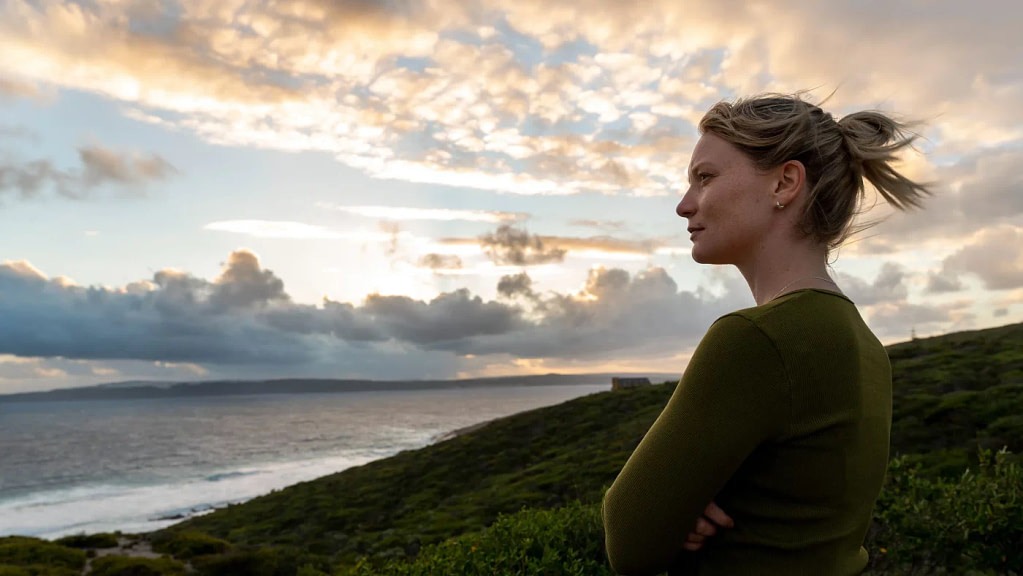 Look out, James Cameron, because you’re not the only one venturing underwater to make movies. While Australian filmmaker Robert Connolly’s Blueback may not have a blockbuster budget or 3D viewing options, it is a family-friendly charmer filled with elegant, real-world beauty.

Blueback opens with Abby Jackson (Mia Wasikowska, Alice in Wonderland, Crimson Peak), a marine biologist exploring coral reefs, as she gets a call telling her that her mother, Dora, has suffered a stroke. Abby hops on the first plane home and returns to the seaside town where she grew up. As she cares for her ailing mother, Abby remembers the days of her youth, swimming in the ocean with her mother, who is played by Rahda Mitchell (Man on Fire, Olympus Has Fallen) in all of the flashbacks.

Here we see Dora as a plucky spitfire whose unwavering commitment to protecting the bay from threats—ranging from overly aggressive fishermen to money-hungry developers—took a backseat to nothing, including her relationship with young Abby (Ariel Donoghue, Wolf Like Me). While the mother and daughter may have had trouble finding synchronicity on land, they made a great team underwater, where they discovered a rare fish known as blue groper that they affectionately dubbed Blueback. As Abby looks back on those defining years of her past, dreading a future without her mother, she draws strength from her memories of Dora and Blueback and how both shaped her into the woman that she is today.

Blueback is a simple story with a simple message about facing your fears, taking care of what’s important to you and standing up for what you believe in. While it occasionally treads water in an effort to stay afloat for its full runtime, Mitchell and Donoghue’s chemistry and endearing performances have a buoying effect, and Connolly’s assured direction keeps it from going under.

Wasikowska gets top billing, and she’s memorable in the small amount of screen time that she has, though it’s not the lead role. Truthfully, she’s upstaged by the title character, who is brought to life by an astonishingly realistic animatronic puppet. This handsome bloke serves as an obvious, effective metaphor for both the endangered ocean environment and the indomitable human spirit, and every moment he is on screen is pure joy.

Eric Bana, who starred in Connolly’s last film, The Dry, and is already set for its sequel, adds presence in a small supporting role as “Mad Macka,” a charismatic local fisherman with a fondness for both Dora and Abby. The scenes of human interaction feel a bit rushed at times, as if Connolly shares his characters’ desire to be in the water whenever possible. While these sequences are frequent and a little repetitive, they are simply too gorgeous not to love. Composer Nigel Westlake (Babe, Miss Potter) is one of Australia’s most underrated natural wonders, and his luminous musical score is a big reason that these extended sequences avoid tedium.

Blueback is an entertaining family film that wears its conservationist credentials on its sleeve. While it may not be destined to pack in huge crowds during its initial release, it has definite cult favorite potential and it should find a solid following among preteens and their parents. It’s screening both in Park City and Salt Lake during the Sundance Film Festival, and if you get a chance, I would definitely recommend grabbing the kids and diving into this one. –Patrick Gibbs