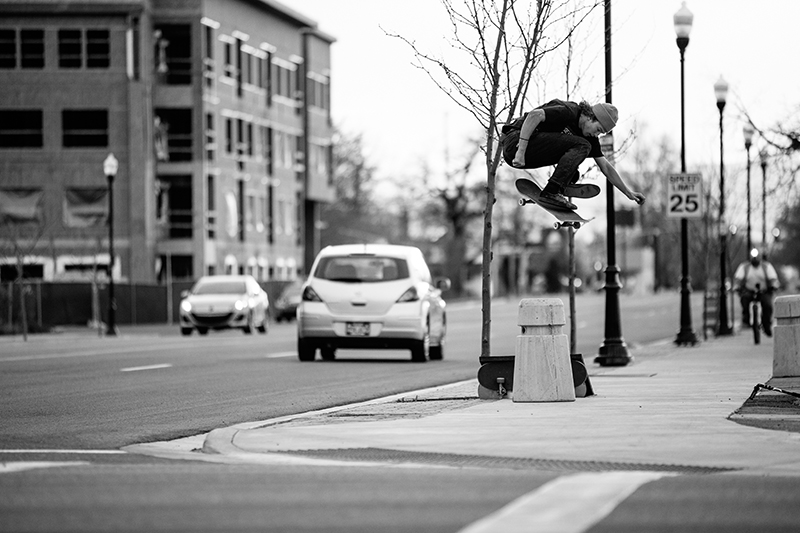 I don’t know if it’s something in the water or if there isn’t shit else to do besides skate, but Utah County knows how to pump out ripping skaters. Adding to the bunch, Ashton Harris seems like that skate-or-go-home type of dude. Take it from the man himself—if Harris isn’t skating, he’s eating food or hanging out. Is there really more to life than skating? Doubtful. In any case, I’ve seen how good Ashton Harris is.

The dude can ollie, like, six decks. Ashton Harris has got “it.” I got lost on his Instagram waiting for him to roll up and quickly realized that the kid rips—and that’s just based off the park footy he tosses like nothing. Can you say switch noseblunt? Harris surely can. How about a perfect backsmith, front 180? Yes sir! Harris is no stranger to the streets, but he doesn’t limit himself to one terrain. “I skate ledges the most, but it depends what park I’m at,” says Harris. “If I’m at Springville, I’ll flow everything—all the transitions and stuff.”

At the ripe age of 12, Harris started just like the average kid does. “I just saw this kid skating on his driveway,” he says. “He talked to me as I was walking across the street: ‘Did you see that? I almost did that!’ I was like, ‘That was sick!’” Some time passed before he got his first board and decided to give it a go, but when he did, there was no turning back. Without much of a skate scene in Springville, though, Harris had few options. “I skated flat in front of my house for the first year, so … ” he says, chuckling. I wonder what kind of flat-ground tricks he was busting then, considering some early influences: “Before I actually started skateboarding, I would watch Rodney Mullen stuff all the time,” says Harris. For early motivation, though, Harris didn’t even need that extra push. He was doing it for himself, saying, “It was just me on my driveway.” But that didn’t last long—he recalls that “this kid was skating by my house, and I had these couple of kickers my dad made for me,” he says. “He stopped and skated with me for a bit—then we skated together all the time.” Skating is just better with friends.

As far as his skating today goes, Harris’ days of dad-built kickers are a thing of the past. Ledges, rails and gaps are more his thing. In a game of SKATE, I really got a good sense of his skating. He started the game out with a covetable kickflip, popped high and flicked clean, following it with the same thing switch. Next, it was your average good-luck-trying tricks: hardflip, 360 shuvit (with a little foot wrap) and a nollie half-cab heelflip—all popped and landed smoothly, of course.

Our game of SKATE wasn’t my only glimpse of Harris’ skating, though. He’s got a solid minute of footage on YouTube displaying casual lines, textbook front crooks and boosted hardflips—all filmed from an iPhone. Also featuring stylish front blunts and solid switch flips down 9s, the quick clip is really only a tease of what should come next. “My friend Seth [Haupt] and a bunch of my Springville crew, I guess, are working on a video,” Harris says. We can expect some destruction of Utah County spots, as Ashton’s currently in the all-familiar struggle of flying the coop. “I just live with my parents right now,” he says. “I want to move out somewhere cooler, because I feel like it’s super restricted here. Theres a bunch of stuff in Salt Lake—I think that’s where it’s at.”

From the casual skating in his iPhone vid to what I saw in our game of SKATE, I’m really looking forward to Harris’ upcoming video part, date TBD. His style is so pure. Watching Harris, it may seem like he’s a perfectionist, but in reality, I think that it all comes naturally to him, and perfect landings are probably the first that he rides away from. He explains his warmup routine: “I’ll just do a couple flat-ground tricks,” he says. “If I’m skating a ledge or something, I’ll just start skating the ledge immediately. If I go to a gap, I’ll skate flat for a couple minutes to warm up, then I’ll just go for whatever.” He makes it sound easy.

To sum it all up, Ashton Harris is a textbook skater. Some have taken notice to his proper skills, too. Milosport Orem and Flatspotter Skate Goods (flatspotter.com) have both given him the team nod, hooking him up with boards and other goods. Expect big things from this kid, as he seems quite the stranger to the couch, saying, “If I sit too long, I go insane.” Harris doesn’t sit around. In terms of what’s next for Harris, he plans to get the hell out of here with his sights on even better spots: “I’m dying to go on a skate trip,” he says. “I don’t have any plans, but I’m for sure going to make some. I’m down to go anywhere.” Wherever Harris goes, we know it won’t be boring.

Scroll over images for full-size photos and captions.