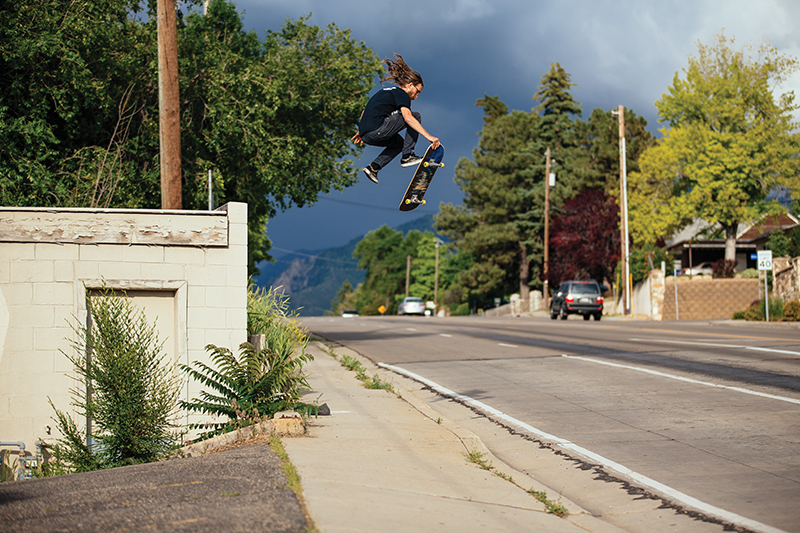 I was ordering tea and a dainty little slice of raspberry crème cake when Caleb Orton swaggered into the Salt Lake Roasting Co. With his son, Otto, in the crook of his arm, he rushed into the bathroom to change a dirty diaper, asking for a stiff cup of coffee. For a guy that juggles parenthood, double-shifts at the Porcupine Pub & Grill and a skating acumen that’s almost without parallel, he seems to do it all with little effort.

In case you don’t know him, Orton is a giant in the Skate of Utah. He may have possibly been spawned from the blood and cum of the god of the sky—he’s got skills. He has been hooked up by some big names in skateboarding, including stints with Element as well as Tum Yeto–related flowships. Orton can boast of video appearances in the double digits— I’ve seen a lot of them, and they’re all killer. He’s the type of guy with a big enough bag of flip tricks to string a line without having to jump down anything—I counted 10 heelflip and kickflip variations in a line he filmed for Weast Infection—and the line between his switch and regular tricks gets blurry. But he can jump down sets—see the nollie laser flip down the seven-stair for his banger in the same video.

With all that’s on his plate, Orton has only Sundays to really go out and skate, but his intensity is still in the red. Regarding what’s been on his mind skate-wise: “I’ve been watching a lot of Aaron Homoki, so I’ve been trying to jump off shit,” he says. “I wanna look for rooftops. … My knees aren’t broken yet.” His vigor—and, dare I say, luck—could be genetic, after all. Orton comes from a hardy stock of Mormon Pioneers, one of whom—a grandmother of his—got frostbite in both legs and had to get them amputated with a meat cleaver. She raised kids hobbling around on her knees on a dirt floor. As to whether she wore shoes on her nubs, he says, “I don’t believe so, man. I think she was just that hard.” Maybe his own indestructible knees have Grammy to thank.

Some years back, Orton took his passion for skateboarding to the Golden State to try his luck. Like so many other talented skateboarders from Utah, the curse of Southern California befell him, and he broke his wrist. He was unable to work the job he had out there, but he still managed to keep skating until the well dried up, cutting the L-cast from his arm with a butter knife. “I’m sure it’ll be jacked when I’m older, but so will every other bone in my body,” Orton says.

He returned to Salt Lake after living in San Diego for around eight months from 2006 to ‘07. Since being back home, he has put out full parts in Weast: Better than Some, Worse than Most and Four Down—some of his best skating. He told me about some of his early years skateboarding in the valley and nearby areas, and he remembers skating Wednesday Night Jams at Classic Skating. “You could see all the dope skateboarders from back in the day, like those dirty Hessian dudes,” he says. “It was before I knew who any of them were, but it was cool, man, to go and see some people just ripping.” He also remembers when parks like the Farmington Skatepark, an abomination of janky rails and cement, was one of the few on the map.

Orton has seen the local skateboarding community change a lot from its humble beginnings. “Lots of spots have come and gone,” he says. “It’s a canvas. It’s cool to get out of town and go skate other stuff, but I definitely dig Salt Lake…. A spot dies [and] a new spot gets made.” Over the years, Orton has been involved in more than just the “skateboarding side” of skateboarding. Recently, he has helped Mark Judd, owner and operator of After Dark Skateboards, get the company going, occasionally lending a hand in the shop and managing the budding skate team. “Whoever’s interested in skating the best boards out there, hit up Mark,” he says. He tells me that After Dark will also be working on a video in which Orton will have a part. In addition to the AD video, Orton plans to film a part for the new Weast video. In the meantime, you can catch Orton on Sundays, possibly skating the Public Safety Building on 300 East (a new favorite of his).

Of all of the stuff he’s done and all of the stuff he’s going to do, nothing seems to matter as much as the time he looks forward to spending with his son, Otto. Among their favorite pastimes are watching Teenage Mutant Ninja Turtles and going into the mountains. “Me and Otto go up the canyon all the time—we like to get our toes wet in the river,” he says. “Hopefully, when he gets a little bigger, we’ll get him a little backpack setup and we can go up to the Uintas and just walk off into nothing for the weekend.”

At the close of the interview, we smoked a cigarette outside the café and watched a train of people in splashy clothes and resplendent accessories wave signs pronouncing their individuality. It was the beginning of the Pride festivities. Most of the best minds agree that individuality is one of the most important things to possess. When I asked Orton what he likes most about skateboarding, he told me this: “No one’s [style] is gonna look like anyone else’s. It makes skateboarding an aesthetic, a very beautiful thing.” With the great minds, then, Orton agrees.