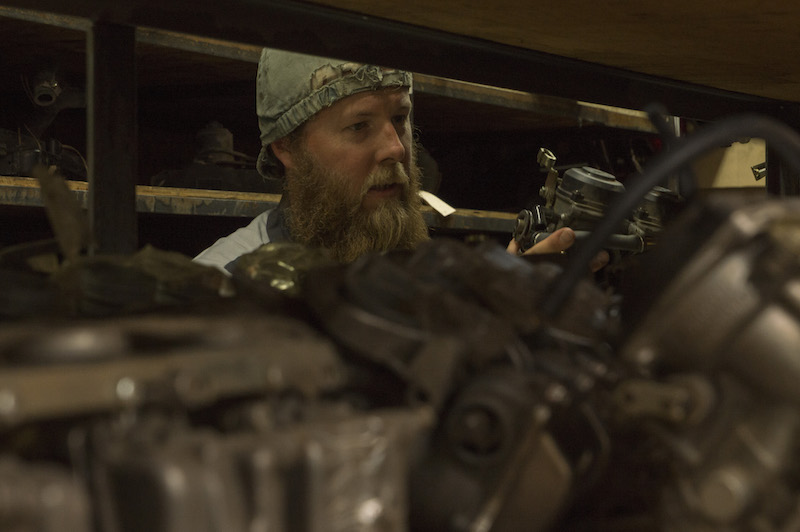 Grim Cycle Salvage has established itself over the past seven years as not only a super-professional custom mechanic shop specializing primarily in Harley Davidson, but also as the parts store for all of your DIY needs, helping to empower the community to get messy and tear into their bike projects themselves. Owner and MMI-certified mechanic Sean Jordan has been riding and working on motorcycles for most of his life. “I pride myself in doing stuff right,” says Sean. “I’ve been doing it long enough to know what does break and how to keep it from breaking. We’re definitely mechanics first.”

After selling his first bike in order to buy tools, Jordan’s dedication to the craft brought him from Georgia to Orem nearly 20 years ago, where he and his family have found their niche in the community.

I met up with Jordan at his massive shop, located at 554 Commerce Road in Orem, as he and his wife Cat were busy coordinating their concessions booth for a local charity soccer tournament. “Everyone always wants to see The Yard,” Sean says as we meander through his shop and out the back door—Sean cautions my every step through the battlefield of parts and fluids: “Oh, I’ve got some tire grease leaking.” As we enter the backyard, I begin to understand what he meant. The Yard is an unbelievable collection of dismembered motorcycles, with nearly 400 bikes neatly organized in rows waiting to be torn apart by Sean and his small crew. “We get people who just want to come walk through, and we’re not really a pick-n-pull,” says Jordan. “We strip everything down—good parts go into inventory, bad parts go in the scrap bin.” Sean says it’s nearly impossible to keep up on the neverending disassembly necessary to move some of these bikes from his massive collection and that a lot of bikes are donated or end up as scrap metal. “Every year we donate three Chinese bikes to be blown up for a charity run for juvenile diabetes, which is the best thing to do with one of those!”

Between regular summer maintenance and custom work, the shop is full of enough work to keep Sean and his small crew busy all summer. He says, “We do all the stuff most shops won’t do; we build from the ground up.” Grim is also a full-service machine shop. Sean himself has over 20 years of experience with welding and fabrication, and he shows me one of his custom gas tanks on one of the many bikes being rebuilt. The other side of the shop, however, is another impressive sight to be seen. “This is our constant battle,” says Jordan. “We inventory everything. We’re not in the business of selling bad parts. My wife has singlehandedly done all of this.”

Sean and Cat have spent the past seven years not only tearing apart the 400 bikes in The Yard, but also cataloguing and inventorying every part by make and model, creating an impressively organized parts store and available worldwide at your fingertips on their easy-to-navigate website, grimcyclesalvage.com. Sean tests and guarantees all of Grim’s used parts and has an amazing cataloguing system to keep track of what they have in stock. Cat has catalogued and photographed roughly 6,000 parts for the website, all done in a small office/photo studio in the shop. Grim is also a certified parts dealer for major manufacturers and can get any new part you need into the shop as well.

In March of 2013, Sean and four friends set out on an epic 24-day journey to Costa Rica, with 4,000 miles of all the stress, breakdowns and tribulations you would expect on such a massive undertaking. Photographer Steven Stone chronicled their amazing trip from Salt Lake to the Panama Canal. In April of this year, I got to witness that journey over beer and tacos as they shared it with the two-wheeled community of Salt Lake City via the CR2013 photo show at The Commonwealth. You can see their journey, the bikes and learn more about the guys at cr-2013.com. Following an experience that extraordinary is difficult, and Sean wishes he could spend more time riding and taking long trips. But, as with many small business owners, Sean says, “If I take time off, I just pay for it dearly.”

Thanks to Sean’s mechanical knowhow, a lot of potential problems on the CR2013 trip were avoided, however, not every rider is so mechanically inclined. Sean’s mission is to educate the community on the machines they are riding, to ensure safety and to keep everyone on the road.  After many late nights “talking shop,” so to speak, Sean and Cat have committed to holding motorcycle maintenance classes in Grim Cycle Shop for the average motorcyclist beginning in the fall of this year. Be sure to check their website for more info on upcoming classes, as well as instructional videos on basic motorcycle maintenance and repair so that you don’t do something silly like forget to put new oil back in after your home oil change.

Sean’s passion for what he does truly comes from a dedication to keeping “the average guy on the road,” as his website says. Check out grimcyclesalvage.com for parts new and used, as well as for photos of award-winning custom work.