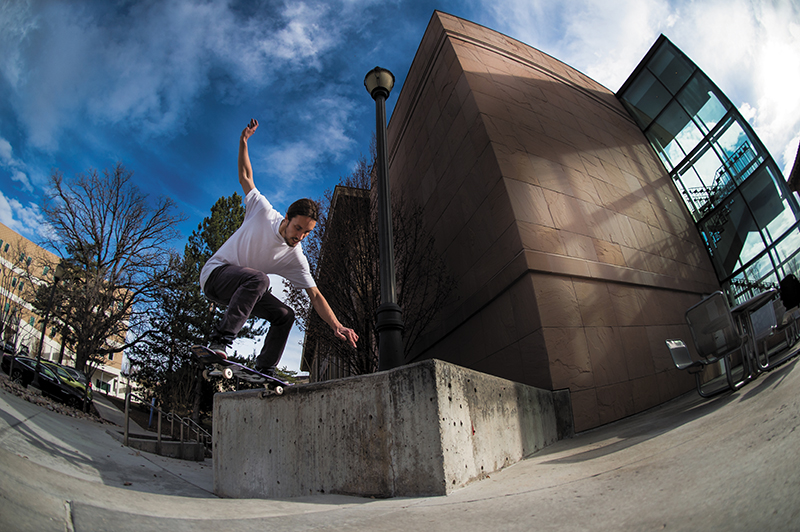 Through the Lens of Eric Ferguson

Local skater and filmmaker Eric Ferguson, aka Fergy, is a Salt Lake original who brings positivity to the skateboarding scene. Fergy executes a creamy style to hit anything and adds bangin’ finesse while skating. He also possesses the ability to smoothly transition to and from each side of the camera lens and shows passion and artfulness while doing so. Eric Ferguson is no doubt an O.G.: With each film, Fergy exposes the culture and lifestyle of skateboarding, creating a bigger impact each time he captures the true beauty of the sport. As he puts it, “The streets are our canvas, and our board and body is our paintbrush.”

It’s easy to see the emotion and passion that pour out of Fergy. He grew up influenced by pro skaters Jamie Thomas and Arto Saari. One of the first films Fergy bought was Zero Skateboards’ Misled Youth, which held a six-minute part of Thomas throwing hammer after hammer. Thomas’ “individual, raw style” influenced Fergy, who soon started his own pursuit to find the light-footed, smooth style he slays with today.

It hasn’t always been this way, though. “My way of skating has changed,” says Fergy. “Creating my style and way of skating was difficult when I was younger, as I was tall and skinny, but I had balance and agility from playing sports growing up, which helped.” Other influences include Fergy’s longtime friend Jared Smith, or “Snuggles,” Andrew Reynolds, who further helped develop Fergy’s style, and the Dirty Hesh 48 Krew. “Seeing skaters who were tall and who skated very well pushed me to achieve my goals,” says Fergy. Growing up

Fergy started filming in high school. With The Berrics’ mentality, Fergy’s approach was to “shoot all skaters.” No matter what style the skater has, Fergy says, “I like to involve everyone.” After endless days of skating with all of his pals, Fergy had stacks of footage. In 2002, Fergy released his first film, which was built off of a group of his buds just skating with no direction beyond having fun. Fergy edited the film in his middle school multimedia class. Showing a bunch of classmates throwing down hammers hyped the crowd.

Fergy went to school in central Washington for a spell, allowing him to experience a different environment all the while. He filmed and skated for a local skate shop called Mosaik, and he continued to collect footage. Shop owner and pro ATM skater Josh Mohs noticed how Fergy excelled at filming the homies around him before crushing it with his own skating—all smooth like a ninja. He soon nicknamed Fergy the “silent ninja.” Fergy says of filming those around him, “Knowing their abilities and mind state, I love suggesting something they didn’t think they could do, then [seeing] them hucking themselves and landing it.”When Fergy came back to Salt Lake, he started his own video/film production company called Fergy The Silent Ninja for projects beyond skating. He also gradually stacked up enough skate footage as he continued to film and skate and released the first Transcend film with help from Gabe Segura. The film series shows Salt Lake City’s finest skateboarders respectfully laying down hammers in some decent spots. One part featured Fergy’s friend Kevin Hutson, who stacked up a full part’s worth of bangin’ footage in four to six months. Fergy says, “He was dedicated.” Another homie was Clark Thomas, who skated every weekend at 9 in the morning to film his part. Fergy took Transcend to sell at local shops—such as BC, Milosport and Blindside—to “test the waters and see how local shops and the skateboard community felt about [Transcend],” he says. “It went very well.” Exposing more skaters and stacking enough footage, Fergy released Transcend 2. Fergy started filming for Transcend 2 in June of 2014 and finished in September of 2015, and the film is available at Half & Half, Good Looks, BC Sandy, Blindside Sugar House and on flatspotter.com.