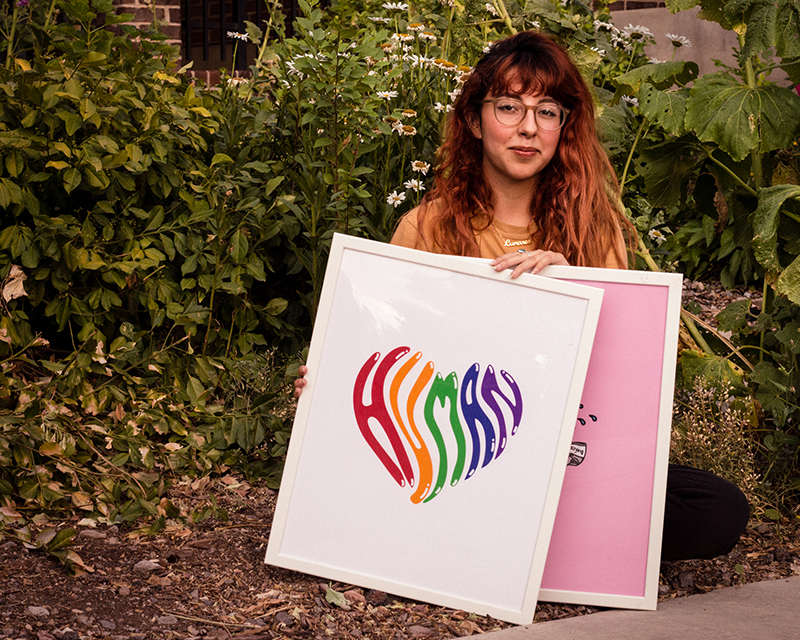 Alethia Rodriguez has been using art to help process her emotions for years. She produces art under the moniker Alethia Lunares and has been honing her stunning and provocative digital work for several years. With the help of familial influences and self-taught talents, Lunares has captivated followers around the world after she was first discovered on Tumblr several years ago. Since then, she has grown quite a lengthy resume, working with companies like Vans, SXSW, Hulu and Apple Music, producing creative content for their social media platforms and special events. Her cheeky illustrations of ’90s memorabilia, pop culture icons and animations of cute, sad girls with dainty hands reflect Lunares’ own emotional musings. These images have resonated with fans because they simultaneously capture an image through beauty and horror.

Originally from the vibrant and beautiful Mexico City, Lunares first came to the Salt Lake area at the age of 5 and has lived here ever since. Lunares has always been drawn to the arts and was exposed to painters such as Matisse and Claude Monet by her mother, who had attended a French high school and backpacked in Europe when she was younger. “She was a badass lady and would speak to me in French and show me French things when I was younger,” Lunares says. “So Monet was a really big thing to me … and French art was kind of the influence back then.” As she grew older, Lunares began dabbling in various artistic mediums, and finally landed herself a spot at the University of Utah for an undergraduate degree in film and digital media. Lunares chuckles when she reflects back on that time in her life, saying, “I didn’t learn shit in school.” After realizing that university life was not fitting with her own needs, she dropped out and began working with local V2 Events, which encouraged her to begin experimenting in digital art, “and it kind of just took off and made its own way” she says. She began posting her art on social media and gaining followers.

At only 25, Lunares’ art has opened doors to work with some of the biggest social medial moguls. After being scouted on Tumblr, she was offered a job working with Vans on their 50th Anniversary campaign in 2016. For the event, she created multiple, playful gifs and promotional images featuring some of her signature bold colors, 2D drawings and their classic sneaker styles. Following that exposure, she was quickly snatched up by the music festival SXSW to create portraits of their Apple Showcase artists, and was also recruited by the music streaming empire Apple Music, to create artwork for the “Life Campaign” featuring Drake’s latest album.

Currently, Lunares focuses mostly on digital art using Illustrator and Photoshop. She hopes to venture into different realms, such as film animation. Regarding her approach to creating, she says, “I feel like most of the things I make are selfish. They’re to help me understand what I’m feeling at the moment. I don’t even interpret a piece until after I’m finished. I’ll look at [a piece] and try to psychoanalyze it, as a form of self-therapy. There are points where I’ve tried catering to my audience, but I think people can tell that it isn’t as authentic.” She hopes to continue presenting her artwork at pop-up shops, where she says she’s able to connect with her audience intimately. She admits that when her mental state is more positive, it’s not as easy to create her art, which has left her delving deeper into her own self for inspiration. “I’ve been trying to focus on not using colors as much,” she says. “Mostly, it’s either one or two colors at the most [in an image], and [minimal] shading, and it’s just flat. I’ve been focusing on trying to be more naked about what I’m feeling and trying to push myself.” The approach has created some truly beautiful pieces, like Under The Weather, which features a girl, her face in her hands, a single tear on her cheek and over her head, a cute little raincloud. The caption on Instagram seems to say, “although, the artist is fine,” and with nearly 1,000 likes, the world relates to the image.

But Lunares admits that her biggest and strongest following is still located in her hometown of Mexico City. “It’s crazy because I haven’t been back since I was born, and for some reason, [my art] connected with Mexico City ,especially,” she says. “All these younger kids from Mexico City I hope I can continue to connect with them. I feel like it helps, and I’ve had some young people reach out to me and thank me for expressing what they are feeling in a visual form.” Snapchat picked up one particular piece entitled Take Care, which features nine images that represent different ways to take care of yourself and your health. Afterward, Lunares received an enormous amount of messages from young people expressing their gratitude for sharing her own advice with the world. It’s this sort of connection with her audience she hopes her art will continue to develop.

In the future, Lunares also hopes to expand her line of digital artwork to the 3D realm. “I haven’t been posting as often as I did in the past—not because I’m sick of making digital art but because I want to try different things like clothing and jewelry, more physical things.” Lunares hopes to continue creating her art not for fame nor fortune but with hopes to break out of her own “artists’ shell,” as she puts it. With the upcoming DIY Festival Aug. 10-12, Lunares is looking forward to creating an entire visual experience for shoppers this year. She hopes to have her website launched in late July or early August of 2018, so be sure to follow her to stay in the know.

You can find Alethia Lunares at godgolden.tumblr.com her animated work at giphy.com/explore/alethia-lunares and check out her Instagram, @alethialunares, for more works of Lunares’ art. Of course, be sure to make time to stop by her booth during the DIY Festival and meet the Queen herself in person.