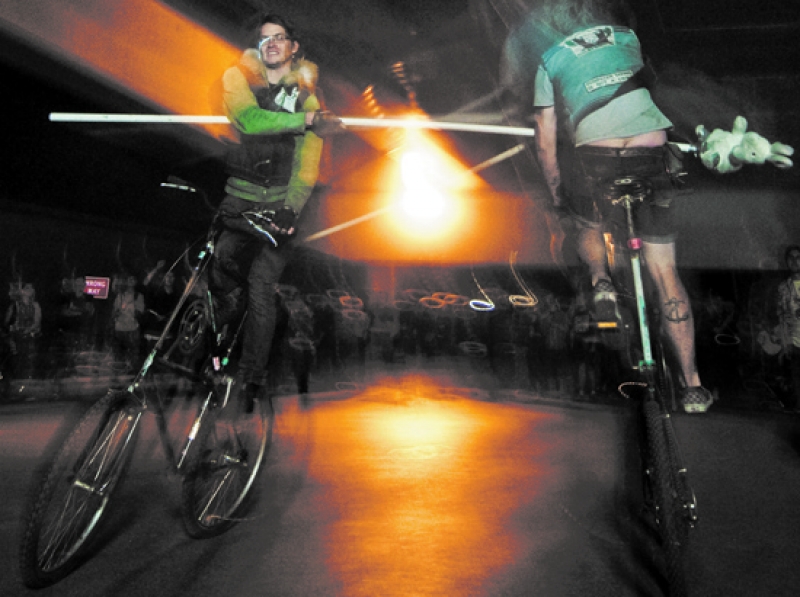 A large crowd gathers under an inconsequential highway overpass on a clear Friday night. Graffiti-sprayed railroad cars and rusting chain-link fences backdrop an unlikely scene. Cody Barnhill looks across the dimly lit asphalt at his opponent. Supported by a friend, he balances about four feet above the ground on the saddle of his tall bike. Under his arm is a ten-foot-long pvc pipe with the head of a stuffed, toy teddy bear impaled on the end. As stage smoke curls around the tall bike’s wheels, acoustic punk band Bombs and Beating Hearts begins another angry ballad. The crowd of over a hundred spectators begins to cheer in anticipation. “I’m fucking amped,” says Barnhill.

Mark Polichette, organizer and MC for the event, calls out: “5, 4, 3, 2, 1 JOUST!” and the two unprotected challengers pedal forward, lances pointed at each other’s hearts. A resounding “Ooooh” is heard from the crowd as both ride by without a hit. Barnhill and his opponent turn around and immediately charge again. Only one man can win the princess and the gold. As the jousters reach their marks, Barnhill loses his balance and quickly jumps off his bike, landing on his feet and avoiding a cracked skull.

Welcome to the punk rock version of A Knight’s Tale.

The Tall Bike Joust held on May 15 is Salt Lake’s third joust and most popular freak bike event. Attracting citizens and cyclists from all walks of life—including hobos and cops—it can’t be described as less than epic. There’s just one question: What the fuck is tall bike jousting?!

“The second I heard about people doing stuff like that, I had to get on the internet, and after seeing it on the internet, I was like, I have to see this in person, I have to do this,” says Polichette, who has helped in the construction and design of many of the tall bikes you see around town.  The idea of jousting has been around for centuries, back when knights strutted their stuff on armor-clad horses, but Polichette was inspired by the tall bike events in bike meccas like Portland, Seattle and New York. The movie B.I.K.E. attributes the origin of tall bike jousting to the Black Label Bike Club, a freak bike organization founded in 1992 in Minneapolis with a chapter in New York City. How they combined tall bikes and medieval jousting, we may never know…

“Why did people joust on horses? ‘Cause it’s an insanely risky thing to do, it makes for a great show, and you’ve gotta be a badass to be willing to do it,” says Polichette. He offers some insight on the motives behind the idea of  the sport.  “Anybody who has ridden a bike has thought of pushing someone off. It’s kind of cool how there’s a culture behind it,” he says. “The world’s based on challenges. You’ve got wrestling, you’ve got boxing, fencing… you’ve got all sorts of one on one competition. Here’s something to involve the tall bikes with.”

A tall bike, for those who don’t know, is a bicycle made from two frames welded together. The height depends on the frames, but the average tall bike measures about four feet from the ground to the saddle. Most of the lances used at the joust are made from thick pvc pipes measuring about ten feet in length, the ends softened with rags, stuffed animals and even boxing gloves. The rules of the joust are simple: randomly chosen one round eliminations, the first person to hit the ground loses and the winner goes on to fight again.

Who can joust? “The main thing is showing up… we should have three or four tall bikes for people to use,” says Polichette, “As long as you’re not an idiot, you should be able to roll out of whatever type of situation you get yourself into.” Safety gear is suggested, but not enforced. “The whole concept of this is to be free, to make your own decisions. People can do whatever the hell they want. Everybody is aware of the risks. I wear a helmet. I need to use my head the next day,” says Polichette.

With the level of risk involved, it’s hard to believe such an event is legal.  It’s even harder to believe that our local law enforcement frequently becomes part of the cheering crowd. “Who doesn’t like [tall bike jousting], duh!” says Andy Rice, a member of the Barnhill support team.

“I think that the appeal to tall bike jousting is that nobody knows what to expect. To me, that’s a cooler aspect, to say you’re a part of an event that is kind of impromptu and unique. There’s nothing else like that in Salt Lake, it’s different,” says Polichette.

Impromptu is definitely an accurate way to describe the joust. With very little advertisement, the event’s popularity is mostly due to word of mouth. Abe Samaniego, a local bmx rider, saw the fleet of tall bikes riding down the road and decided to follow them, not knowing about the joust. “I’ll try it out eventually,” he says as members of SLUP, Salt Lake Unicycle Posse, show up, attempting to joust on their unicycles.

Not everyone is taken in by the risk appeal, however. “I don’t think I will [joust], I’ve got kids,” says Nick Kenworthy, a local cyclist. “If I had better medical insurance…” says Tom Fleming, another local cyclist and spectator.

For most members of the cycling community, the introduction and surprising popularity of the Tall Bike Joust is yet another step toward making Salt Lake comparable to the holy bike meccas. “This is bringing out a whole other genre of biking for Salt Lake… it gives the feeling of bike culture without speed, lycra or mountains. Just a great feeling of individuality,” says Ali Knutson, a local cyclist.

Dallin Credible, reigning champion from the last joust, wins the homemade medal for this round, along with a bag of tubes from Salt Lake Bicycle Co. He says this joust wasn’t quite as brutal as February’s, but the sport remains “punk as fuck.”

“The real event is just to get people out and doing something stupid. This is just something that gets people out of their normal, everyday rut of life. When you see a giant tall bike and you hear that you’re going to be jousting on them, you have to see it, even just for a moment to say ‘what the hell is that,’” says Polichette.

“If anyone wondered where punk rock went, all you have to do is look under a bridge in Salt Lake City,” says Barnhill. The next tall bike joust will be Friday, July 3.  Visit saltcycle.com for more details.