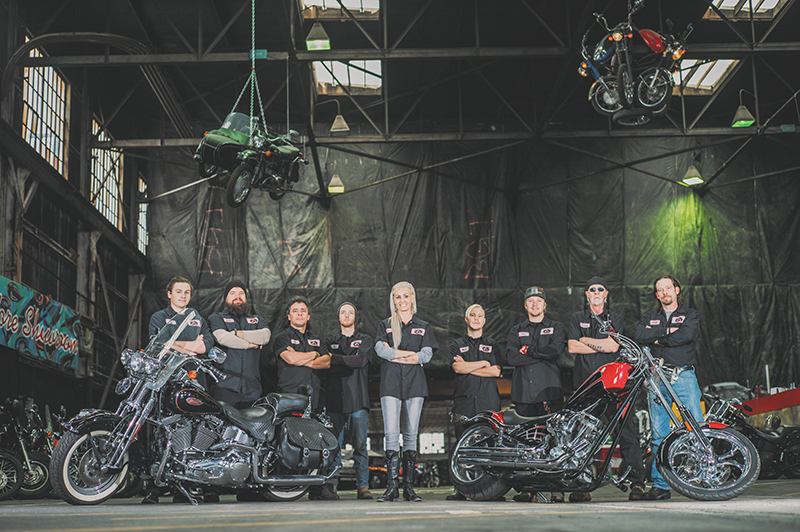 Addictive Behavior: Beauty and the Bikes

Candice Davis, owner and operator of Addictive Behavior Motor Works, is not as rough around the edges as many would imagine a woman who runs a motorcycle and 4×4 service and customization shop to be. “People hear my voice on the radio and come in just because they want to see what I look like,” she says. Davis is refined and graceful, professional and eloquent—a mother of nine, a businesswoman and a gearhead with a passion for anything that runs on gasoline.

Addictive Behavior Motor Works sits in the historic Granary District of Salt Lake City. Parked outside are lifted Jeeps and trucks that could chew up and spit out my little Subi, but I park next to the biggest one anyway and hope for the best. An impressive warehouse is home to countless motorcycles, ATVs and trucks that are either for sale or being serviced by the experts at Addictive Behavior. Head Service Writer Mick Dolce greets me at the door with a huge smile and offers me the warmth of the customer waiting room, where the entire shop comes to refill their coffee and introduce themselves while I wait. Addictive Behavior’s Service Manager, Daryl Radford, has been with Davis since the beginning. He may not own the shop, but has “the passion and dedication as though he does,” he says.

Davis grew up in South Jordan, the eldest of four. “When Grease and then Grease 2 came out, I wore out my 8-track copy of the soundtrack, went through several copies of the movies and bought a leather jacket,” Davis says. “The black jacket meant you were going to get in trouble, which I wasn’t. I learned to ride on the biggest bike I could find so I wouldn’t be afraid of anything.”

Davis’ love for motorsports grew into a business five years ago when she went to buy her first road bike. She says, “I had a friend who rode Big Dog Motorcycles—they are beautiful and have so much power behind them. I said, ‘I want one of these.’ My husband asked me what bike I wanted and I said, ‘I think I want them all.’” Davis then bought the Big Dog Dealership. Three weeks later, Big Dog closed its doors, and she lost everything. Davis is not one to go down without a fight, though. “I refuse to lose,” she says. After changing her business concept and putting her family’s toys up for sale to support the business, Addictive Behavior has become one of the most versatile power sport dealers and service shops in the state since 2011.

Davis’ vision for Addictive Behavior is to be the destination shop for power sportspeople of all interests and to support their passion for motorcycles, trucks and Jeeps. The shop continues to grow as the team hones in on its niche in the community. In 2015, they featured two Jeeps and one truck in the SEMA Automotive Specialty Products Trade Show and hope to absolutely trump last year’s entry this year. Currently, Addictive Behavior specializes in service, repair, customization and fabrication for motorcycles, trucks and jeeps. Davis’ skilled team of technicians will work on any style of bike and provide their customers with the parts and knowledge that they need to start their own projects. Davis’ philosophy on motorcycling is comparable to how parents of kids in little league talk about sports: “When I have kids come in who’ve just bought their first ride, it is my love and hope to get it running so they can use it until they can afford a [custom bike],” she says.

Getting into the male-dominated power sports business in a community where many small shops already exist poses a unique blend of challenges, scrutiny and intimidation. “To go into a male-owned shop and feel like their equal is really hard,” Davis says. There are a number of misogynistic assumptions that Davis deals with on an astonishingly regular basis. “At first, I was told I’m a moron and I don’t know what I’m doing,” Davis says of her initial jump into the industry. Surprisingly, she still gets phone calls requesting to speak with a male technician for help with parts and service. “I hope they adapt one day,” she says. The stereotypes continue to run strong in the motorcycle community, she claims, with many people assuming that all female motorcyclists are “expected to be heavy, or biker girls are all lesbians, or biker girls don’t have families,” she says.

Davis has taken her entrepreneurial spirit to the streets, so to speak, and has used her experience to educate not only young women, but also youngsters in general on the importance of locally owned small businesses and the importance of a college education. Davis continues to advocate for entrepreneurship and education in Salt Lake City. Stop by Addictive Behavior’s new location and check out their impressive inventory, and visit abmotorworks.com for upcoming events and workshops.