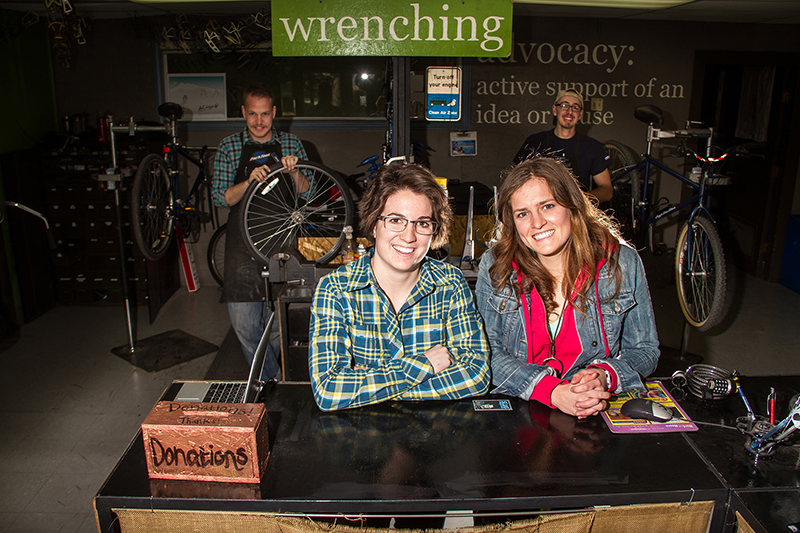 While Salt Lake is heavily laden with a rich cyclist subculture, it’s easy to forget that beyond the city limits, the trend of living green and working to improve air quality is spreading. Aggie Blue Bikes (ABB), a bike-rental program, initially started by members of the Utah State University community, is the poster child for taking on a cause with no reservations. Stephanie Tomlin, the program coordinator of ABB, invited SLUG to come out to see the shop and explore what they have created for their community. On the surface, it’s a simple rental program that offers bikes as a reliable, sustainable form of transportation for three months at a time at no cost to the users. The volume of commitment and drive required to sustain the program creates a backdrop that provokes waves of inspiration.

I arrived at the ABB shop earlier than anticipated and had an opportunity to observe the employees at work. Everyone was warm and welcoming, introducing themselves then returning diligently to various bike projects. I couldn’t help but notice the genuine joviality infused into the store. When Tomlin arrived, she reintroduced Katie Harker, the shop manager, and the three of us tucked ourselves away into Tomlin’s office to try to fully translate the story of ABB. “The original intent was focused around air quality in Cache Valley. We have some of the worst air quality in the entire nation (during various times of the year). A huge factor of that is emissions—personal miles in vehicles being the biggest problem,” said Tomlin. A group of concerned students, staff and faculty pulled together with the goal of softening the generally prohibitive bike policies at Utah State University. While bikes weren’t completely banned, there wasn’t much access beyond the main arteries on campus. After pushing for new policies that allowed bikes throughout the campus, the prospect of providing sustainable transportation that could be integrated into everyday life begat the current system.
While the ABB’s services are numerous, the program is centered on renting out bikes for beneficial amounts of time. The renters are allowed an option of renting the bikes daily or for a three-month interval. During the three-month rental, the bikes are required to come in every two weeks for regular maintenance. There are also tool boards available for students to come in and fix any issues that may arise. All the bikes are donated, stripped down, built back up and painted. To practice conservation of resources, no new parts are bought for the three-month rentals. This allows incomplete bikes to be broken down and used for other bikes, keeping the rental program free. In addition to not buying new parts, ABB doesn’t carry parts for sale. While, at first, this may seem counter-productive, it serves a vital purpose—preventing competition with local bike stores. This allows the perpetuation of supporting local businesses and, in turn, helps maintain community support. In addition to mechanical services, one-on-one tutorials are also offered. “Rather than having classes or big group sessions where you’re brushing over a variety of topics, [tutorials] provide you with exactly what you need,” says Harker.
Tomlin feels strongly about keeping ABB separate from the University’s recreational program. For Tomlin, it’s truly important that their standpoint is one coming from a commuter’s view and helping improve air quality. Giving an example of the program’s commitment to this cause, she says, “At one point, we were asked to move over and be a part of campus rec. I said no. Right now, we’re a part of the center of civic engagement and service learning, which is a part of the student sustainability office, and [ABB is] always reconnecting with that and making sure that is always a part of the mission.” Despite their relevant and ambitious goals, the shop faces struggles with funding. While ABB currently receives $2.75 from every student’s fees included in tuition, a growing following has provided the need for an expansion. The shop can hardly accommodate demand at times, in terms of space.
As we continued talking about the start of ABB and the idea of being able to provide transportation that can be relied on for an extended period of time, the excitement was tangible the voices of Tomlin and Harker. Their authentic belief in the program was contagious. I found myself dismissing my previous misconceptions of biking—that cyclists consisted of two groups: those who had no other choice but to bike, and those for whom biking took on a competitive outlook. Recognizing the benefits of biking from an environmental perspective, I started getting pumped on buying a bike of my own.
When I expressed my own curiosity about getting involved with the program, Harker told me about the community memberships: “It’s $40 for a whole year, which is the cost of a tune-up in most shops. So you can learn from us how to do it, and continue to use our services. With that, you can do everything a student can,” she says. ABB provides every service short of riding the bike for you. As someone who was entirely ignorant on the benefits of biking, I left Aggie Blue Bikes feeling educated and inspired to start my own transition into the bicycle counterculture. You can find more information about Aggie Blue Bikes at usu.edu/abb.
Photos: