00:00 / 16:39
Spotify Stitcher
RSS Feed
Share
Link
Embed
Most BMX guys that I’m down with didn’t grow up with the luxuries of skate parks in which to mow down unsuspecting skaters—they advanced their skills with shovels and dirt in the woods, or by just mobbing the streets tricking on or off whatever was there. This is Cameron Giles, who, upon meeting me in my clownish snowboard gear, didn’t judge, but instead, offered me up a smoke.

Benson and Ledges: Cameron Giles Lights Up the Street Scene 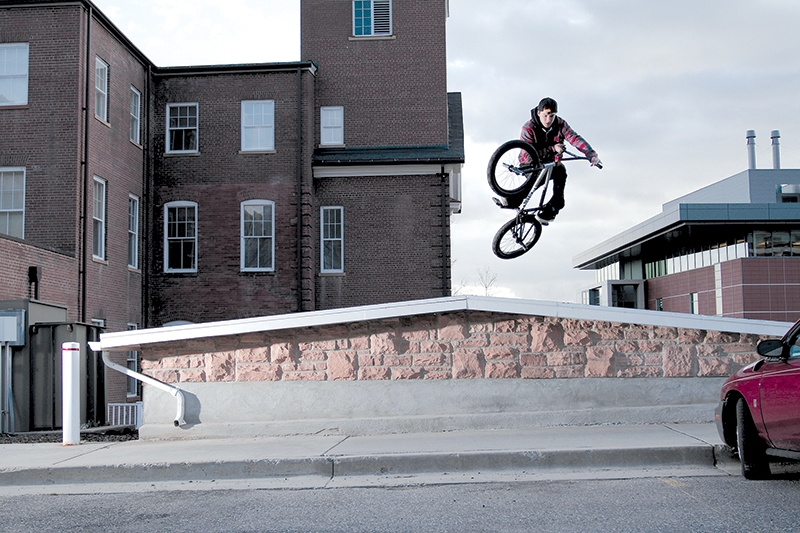 “There’s always that feeling of accomplishment went you do something that scares the shit out of you.” –Cam Giles. Photo: Austin Boyd/austinjedboyd.com

As a skater, I have a love/hate relationship with BMX. The hate extends from Scotty Cranmer, that douche! He still owes me $15 or a free skate session back in Jersey. On the other hand, I love that late-’80s movie Rad! It was pretty sweet. Most BMX guys that I’m down with didn’t grow up with the luxuries of skate parks in which to mow down unsuspecting skaters—they advanced their skills with shovels and dirt in the woods, or by just mobbing the streets tricking on or off whatever was there. This is Cameron Giles, who, upon meeting me in my clownish snowboard gear, didn’t judge like I just did, but instead, offered me up a smoke.

Giles is a Salt Lake native who’s been cruising bicycles since he shed his diapers. He’s raced, ridden park and, over the last three years, has concentrated on street. From what I gather, he’s a talented rider, worker and graphic designer. Through his abilities, he’s found himself smack dab in the middle of the growing street movement here in SLC led by some of BMX’s legends. He’s had clips in Killjoy’s last video, holds down The Wood Shop for Cam Wood, and will be featured in Peace2Haters later this year.
Giles was put on a bike early, and hasn’t stopped pedaling since. “I’ve been riding BMX my whole life, ever since I was about 7 years old,” he says. Giles told me he used to race a “shit ton,” and competed in the West Coast Nationals. “My Dad put me into it when I was little. [I] got to travel with the family—it was tight,” he says. Giles was mediocre, in his own words, but admitted to occasionally making the finals and being crowned State Champ a few times, but he “hated the pressure I put on myself,” he says. When Giles turned 15, he transitioned over to park, and by 17, it was all street. Even though park spots in Utah are more abundant than pregnant teens, Giles was drawn toward the carefree spirit of the streets—the go-anywhere, do-anything factor that parks can’t offer. “I’d rather take a few days to properly wax a ledge than wait in a park to get a trick. Street is just more rewarding,” he says. While all those kids are busy riding the same ol’ park, Giles is busy researching: “I spend most of my time just looking for spots! If I’m not feeling it that day, I can just cruise and look for new [places to ride],” he says.
The BMX scene in Small Lake City is pretty legit, but the street scene is only composed of a few crews.  Naturally, it was only a matter of time before Giles found himself rolling with the state’s finest. The Killjoy crew is composed of the best riders in our area, most notably Cameron Wood, Shawn “Elf” Walters, Tate Roskelley and Mike Aitken, and Giles admits to looking up to all of them. But Giles’ outside influences rely on the raw nature of the East Coast scene. “Salt Lake is so on point with fucking up your spot,” he says. The cops or business owners are on your back as soon as your wheels hit the pavement of a newly discovered zone. Although this happens in the bigger cities, there’s always another fresh spot or perspective around it. Giles admits that’s what he likes about the East Coast scene. “Those dudes just go hard at anything,” whether it be a manny pad, small ledge or a four-stair handrail. This is something Giles says he’s been digging about street: He can have the best time getting techy on the smallest or most obscure obstacles. “There’s always that feeling of accomplishment when you do something that scares the shit out of you,” he says.
Still, it’s through his Salt Lake relationships that Giles has been taken under the wings of the city’s most notorious riders, which, in turn, has led to some hookups to help support his riding, including Killjoy, The Wood Shop and United Bikes. Maybe one day soon, he can make his way outside of Utah to pursue his passion, but it’s not all about living off of BMX for Giles. “[I’m not out to] self promote—some people in the scene are, but to me, it’s more [about] chilling. You don’t have to be the best biker in the world, just be down for a good time. We even roll around with a dude on cheap roller blades,” he says. If his passion on the bike doesn’t pan out or even if he decides not to pursue it, he’s always got his fallback plans. He moonlights as a screenprinter, photographer, film editor and graphic design student, just in case. Not too shabby for a 20-year-old kid.
Finally, Giles wants you to, “keep an eye out for the Peace2Haters edits dropping soon and all the dope shit that Killjoy is going to be dropping this summer.” In the meantime, go see Giles holding down The Wood Shop and follow the Killjoy Crew at killjoyrising.com.
Photos: