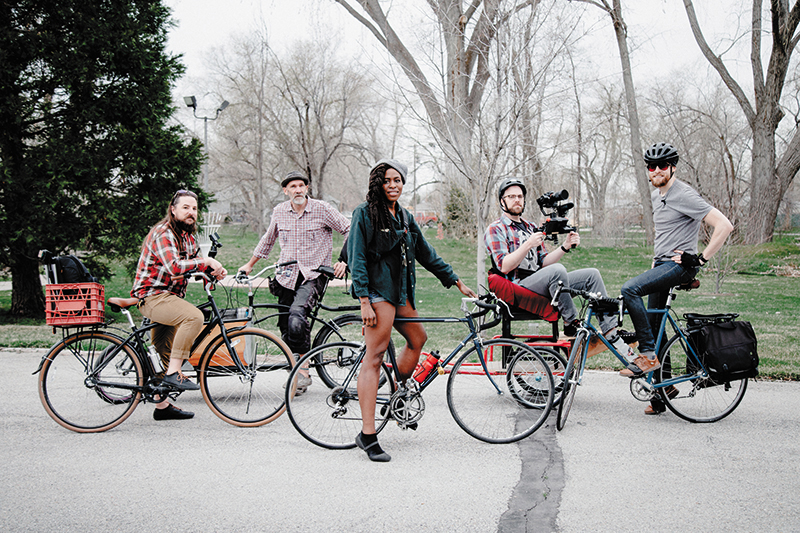 We Bike You, Salt Lake City

“I remember getting back from a trip last year,” says David Clark, one of the two creative forces behind the upcoming documentary series We Bike You. “I got back from traveling and I felt a little bit of grief or depression from being back from my vacation and wanting to be on the road again—wanting to be discovering again. That feeling of loss, combined with our creative ideas, fueled the notion that we could get back out on the road.”

Clark and creative partner Daniel Foster Smith are currently shooting for the docuseries, which explores the urban-cycling experience city by city. To capture film of people riding bikes, the pair and their team—which includes camera operator Sam Garfield and multi-talented bike builder and fix-it man James Lyons—have rigged up a special shooting platform: a bike with an attached trailer on which a person can sit and capture Foster Smith and Clark as they ride around the city, interviewing their documentary subjects—on bicycle—about cycling in that city.

“We have a lot of creative irons in the fire at any time,” says Clark. The pair is also working on a fictional, animated series, and previously completed a short documentary for VideoWest. Foster Smith says, “For us, it’s about a creative practice. Just to be doing and be creating is the goal. That’s why doing this as a series and not just a documentary appeals to us more—because it’s a lifestyle of documenting and meeting new people.” Both Clark and Foster Smith demonstrate a clear desire to immerse themselves in creative energy and connect with others, and those forces, Foster Smith says, are what spurred the creation of the project.

Like many kids, Clark and Foster Smith both grew up riding bikes. So did Nkenna Onwuzuruoha, or Kenna, one of the series’ subjects and the 2016 and 2017 Women’s First Place winner of SLUG’s SLUG Cat alleycat race. All three describe growing into a love of biking after moving to—or back to—Salt Lake City. Foster Smith’s bike renaissance came about four and a half years ago, when he moved back and tried the city’s GREENbike program, which is where he discovered a love for group rides. For Clark, bicycling was “access to the world for a kid like me in my hometown,” he says. That sense of freedom disappeared when he got his license, and he only rediscovered the freedom that comes from relying on a bike when he realized his car was parked in his driveway more than 90 percent of the time. “I found myself resisting the idea of driving and wondered if I could commit to just walking and cycling everywhere I was going, so I got rid of the car, and now I just get around by bicycle,” Clark says.

A Georgia native, Onwuzuruoha says she bought her first bike while in college in Chicago. It was a cheap Target bike that Onwuzuruoha used indiscriminately. “I did everything the intermediate and the expert cyclists tell you not to do because I felt that was the most secure and safe thing to do,” she says, noting that she was a sidewalk biker. But when she moved to Salt Lake City to volunteer for AmeriCorps VISTA, Onwuzuruoha picked up a bike from the Salt Lake City Bicycle Collective—“a little, dinky, old thing”—and that’s when she started to really get into cycling. “Meeting people here as I was getting acclimated to the city, I was able to learn about proper bicycling—taking time to ride on the road, being vigilant, learning some bike maintenance through the Bicycle Collective. I started accumulating bikes.”

A display of several road bikes are hung from the staircase in Onwuzuruoha’s inviting apartment. She says cycling has been a transformative way to make a place in unfamiliar Salt Lake. “The majority of my friends I’ve met through cycling, so I’ve been able to gain knowledge—share knowledge—about how to cycle, where to cycle, things about cycling culture,” she says. When Onwuzuruoha’s not working as an instructor at Westminster College and SLCC, she’s either at the gym, the grocery store or cycling around. Most recently, you can find her cycling with Salty Spokes, a group of female and gender-nonconforming cyclists in Salt Lake founded by Esther Meroño Baro, which has gone under “different names and iterations since its founding in 2008,” and “currently practices a ‘leaderful’ model (shifting roles and responsibilities among women, trans and femme riders).”

Clark indicates that connecting with people who share their urban-cycling experience, like Onwuzuruoha, and then sharing that connection via video, is a compelling motivation for the series. “We want to paint a picture of Salt Lake City, Provo, Ogden, Amsterdam, Portland,” he says. “We want people to see the city looks different when you’re on a cycle.” So far, the two have filmed footage for episodes in Salt Lake City and Ogden. Up next are Berlin and Amsterdam, where Foster Smith will shoot for the project. Each video in the series will tell a short story about cycling in the city: “stories about ingenuity and creative bicycle use,” Foster Smith says. Viewers can look forward to seeing Onwuzuruoha cruise the streets with Salty Spokes, watching James remodel a house and transport material completely by bike, and finding out how a mother in Amsterdam transports her three kids and household supplies with a bike and cargo trailer. They hope the series will capture and spread the joy of cycling.