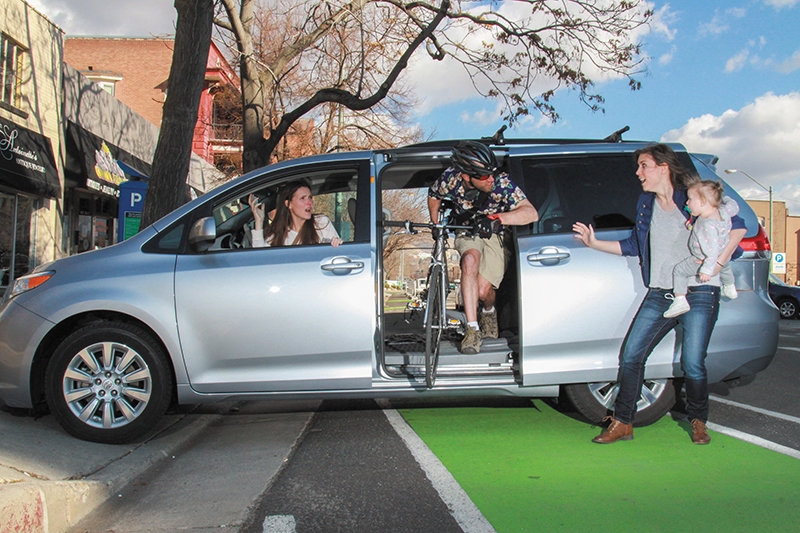 Breaking: Cyclists And Drivers Not As Chummy As Thelma And Louise

In an effort to boost the local white paint economy and add a touch of je ne sais quoi to what would otherwise be just boring, unfashionable pavement, Salt Lake City officials recently unveiled a dazzling kaleidoscope of parking lanes along 300 South (and to a lesser but just as confusing extent, 300 East).

After years of ignoring the ever-growing inversion problem that’s plagued the city and listening to bicyclists blab on and on about not getting to bike really fast from Jed’s Barbershop to Pioneer Park, city planners took firm steps in creating a bike-friendly utopia by inserting bike lanes between the sidewalk and parking spaces throughout the bustling antique shop and sandwich district.

Back when the project began, urban planner Ned Maloof was very optimistic. He says, “I like to think we’re adding a little zig-zag fun to Broadway. We’re going to throw up concrete barriers and draw Union Jacks all over the street to assist all commuters, not just the cyclists. We’re even going to put up cute, little signs to show motorists where to park, which is good because you don’t want all those attempts at parallel parking to be in vain. Plus, if I do say so myself, it won’t be long before we can confidently tell Portland to SUCK IT.”

Once everything was in place, things were looking rosy and not controversial at all, until tragedy struck.

Brent Chalmerton (37) formerly known to locals as “Bike Mike,” gave off a resigned, all-is-lost vibe while recounting a recent incident where he was nearly clipped by a Minivan attempting to turn into a parking lot east of Valter’s. “I never saw him coming,” he says, shaking. Chalmerton had considered cycling as a central focus of his life, but when a car nearly took it, his thoughts turned dark. “I used to be a food-delivery boy, but now that dream is gone,” he says. “I sold my one-speed for a couple bucks, and now I’m pushing paper for a soulless corporation on the south side. I’m ‘Bike Mike’ no more.”

While Chalmerton’s turn for the worse has been heartbreaking for the community, he hasn’t been the only human impacted by the change. After the city did away with diagonal parking in favor of parallel spots, drivers have learned there are a lot more driveways and fire hydrants lining 300 South than originally suspected. With the street’s parking spaces having been reduced by nearly a third, throngs of non-Downtowners have been forced to resort to parking inside abandoned shops at the Gateway Mall—a place where alligators live.

Walking a few extra blocks east from the Japanese Church of Christ, the city center has increased drivers’ general sense of grouchiness and has brought forth all kinds of misplaced shade against hapless cyclists. “Muscly-legged, nature-humping low-lifes,” says overweight motorist Eric Farnswood, shortly before drunkenly speeding off from a bar in his truck.

Despite the cloud hanging over the Downtown area, citizens have managed to cope with the reality of the new parking spots. However, they demand answers. When asked who the fuck thought it’d be a good idea to put the bike lane in between the sidewalk and a hopscotch board filled with perilous blind spots in an already traffic-clogged stretch of the city, lawmaker Patty Nugella shifted around in her seat uncomfortably before commenting, “I think … I left the oven on …”

Salt Lake City Mayor Rosalee Kirkpatmore has taken a more forward approach in addressing the cyclist/motorist kerfuffle surrounding 300 South. At a recent City Hall meeting, she went into abuelita mode, saying, “You know, I’ve been in the city planning-game a long time. Mapping out parking spaces isn’t easy, and if there’s one thing I know about you people, it’s that you’re never happy no matter what we do. Cyclists, no matter how much you tell us otherwise, you’re not goddamn cars, so don’t bike so fast down the lanes, and you’ll probably be OK. Motorists, just because you can afford car payments and gas doesn’t mean you’re shit don’t stink. Put down your phone, pay attention to other people around you, and for chrissakes, remember that parking a couple of blocks away from your destination can be looked at as exercise.”

After the meeting concluded, no one came up with a witty retort to the Mayor until they hit the stairwell, so it appears the controversy has simmered somewhat. However, it remains unclear whether cyclists will have any more excuses to ride on the sidewalks, and it’s doubly unclear—given the nearly snowless winter we’ve had this year—how much snowplow drivers will bitch slap each other over who won’t have to plow 300 South.