SLUG Mag Soundwaves
Episode #403 – Mykah
00:00 / 21:59
Spotify Stitcher
RSS Feed
Share
Link
Embed
Like many cyclists, Evan Service boasts a lifetime of rollin’ rough: “I’ve been riding two-wheelers since before I was three,” he says. What sets him apart is exactly what reeled him into the world of fixed-gear freestyle, though. “I always thought it was cool, something different,” he says. “No one did it at the time that we all started doing it.” 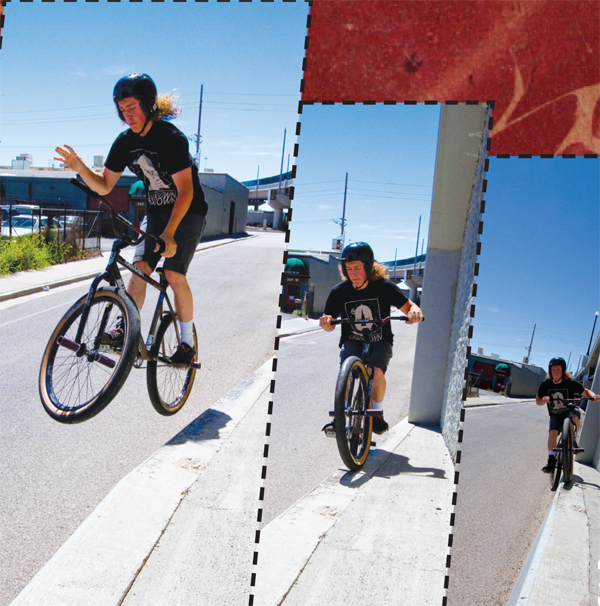 Over four years ago, a group of young men in Salt Lake City grouped into a  “bike gang” of sorts, tearing through the streets on bright, bold track frames, inciting terror and chaos as they raced through red lights in a blur of color. Evan Service was a bright-eyed, bushy-tailed high school freshman during the BFC’s reign over the bike lanes of downtown SLC, drawn in by fixed-gear’s lawless nature and creative possibility. He began to ride with his own crew of “young guns,” the little brothers of the growing fixed-gear scene across the nation.

The days of fixed-gear glory are long gone in Salt Lake City: The BFC dissipated as its members either defected from the city for places like San Francisco and New York, devolved into padded spandex and derailleurs, or simply grew out of the “hobby” and moved on with their lives.

For Service and his pack, FOAD, this is life.

Like many cyclists, Service boasts a lifetime of rollin’ rough: “I’ve been riding two-wheelers since before I was three,” he says. What sets him apart is exactly what reeled him into the world of fixed-gear freestyle, though. “I always thought it was cool, something different,” he says. “No one did it at the time that we all started doing it.”

You see, trackstands, keo spins, over-the-bar skids––the ballerina aspects of the “sport” (I’d argue that around ’08, FGFS spilled more over the line of art than athletics) found in films like Macaframa and Fast Friday—those tricks have all been tossed aside along with the flashy track frames used to execute them. Service and his band of brothers pedal a different breed of bicycle these days, characterized by smaller, more sturdy frames and forks that are easier to handle and can take a beating. The FGFS community now borrows more from BMX with the implementation of ramps and jumps, but maintains its own disposition and direction. Service describes his personal style as “Big, like my muscles. Feebles and 180s, that’s what I like to do,” he says. “I try to get inspired by the stuff I’ve seen and try to get creative with the place I’m at, think of stuff that other people wouldn’t think of doing there.”

Obviously, when you’re seeking out similar spots to hit as BMX kids and skaters, things can get tense, especially when you’re competing for time and space at the park. Service keeps it friendly, joking, “[BMX] kids like riding their little sister’s bikes. It’s cool, though, I like it, but they don’t like fixed-gear freestyle,” he says. “Haters are gonna hate and they can just keep on hating. [I] do it and don’t sweat what people say.”

As a sponsored FGFS rider, Service has every right to stick with that attitude. Local company Velo City Bags and California-based Destroy Bikes both hook him up with parts, and he’s grateful for their help in “keeping my bike sick-looking.” He’s currently rollin’ on a black Destroy frame, faded to “raw” on the back end, with tan wall tires, handlebars and, of course, a pair of trusty Velo City straps. When you ride big like Service, who is constantly in need of replacement handlebars, spokes and pedals, “bro-diddly” hook-ups from quality brands keep you on the road.

Service landed that kind of sweet deal in part thanks to the FOAD crew, which includes long-time local rippers Sam Allgood, Jackson Bradshaw, Parker Thompson and the star of the next generation of bike gang bangers, his own little bro, Izik Service. These boys are constantly filming quality edits, which you can check out on foadfixed.com.

This year’s been a busy one for Service. In addition to graduating from high school, he attended the Red Bull Ride + Style in April, a fixed-gear and urban arts festival in San Francisco. On this trip, he was invited, along with his bro, to meet up with Daniel Torres and the Destroy crew for a trick sesh at the infamous 3rd and Army in San Francisco. You can check out the edit from that ride on FOAD’s website.

Like most cyclists living elsewhere, Service looks to bicycle-booming cities like San Francisco and “Fixie Factory” (look it up on Vimeo) riders like Joe McKeag and Tom LaMarche for inspiration. “You go out there, and there’s a group of 30 kids around [on fixed gears], and you see kids on every corner that have one,” he says. It’s thanks to him and the FOAD crew that FGFS hasn’t died out completely in Salt Lake, and unlike his predecessors, he doesn’t plan to bail. His love for fixed-gear freestyle is rooted here, and he hopes to spread it by example. “[I plan to] just have fun and keep filming, and try to get more people to do it, get the scene bigger in Utah,” he says.

Service is currently working on “trying to get my bar spins on lock-down and off of stuff: stair sets and drops,” he says. When it comes down to it, though, he and the FOAD crew are just out to have a good time, and that positive sentiment and camaraderie is infectious when you meet them and watch their vids.  See it for yourself on foadfixed.com, or like ‘em on facebook.com/foadfixed. Fuck off and die, y’all.