Riders at the 2013 RedBull Rampage were given the opportunity to test their might and transform a prehistoric island in the sky into a race course for three unforgettable, career defining days. 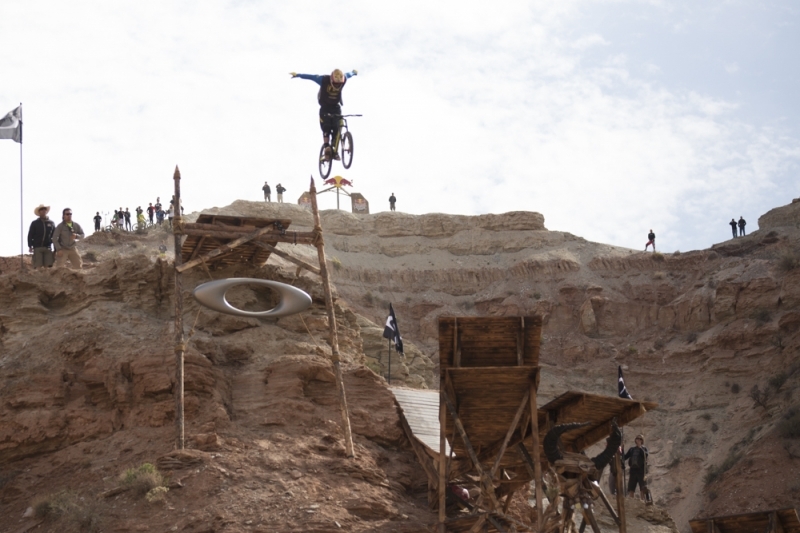 Kyle Strait pulling a suicide no hander off of the big sender on his way to becoming the first two-time winner of Rampage. Photo: Ben Melini

Riders at the 2013 RedBull Rampage were given the opportunity to test their might and transform a prehistoric island in the sky into a race course for three unforgettable, career defining days. The world united in the Virgin desert of Southern Utah this October to bare witness to mountain biking’s evolution. Since the inaugural event in 2001, The RedBull Rampage has taken a handful of the world’s top riders and let them sculpt a labyrinth of lines into a lonely mountainside in the middle of nowhere. Each event has gotten progressively bigger and more death defying as the sport becomes more popular. It also represents the final Diamond level event on the Freeride Mountain Bike (FMB) World Tour. Although this year’s FMB champion was determined prior to Rampage, the remaining riders arrived to showcase their talents on a global stage.

The week leading up to the event brought wind, rain, and more wind. Competitors had to adapt their game plans to accommodate the weather and the rule changes that became effective this year. Each contestant was limited to three days and a crew of three diggers to create their line. This leveled the playing field for the out-of-towners who could not show up two weeks early to build. It was also announced that there would be an “open-line” policy in which any rider could hit any line. However, this became a point of contention between some athletes and the unspoken rule of keep to your own line was observed. The rain did give diggers an advantage to shaping and carving features out of the primordial landscape. Build crews noted the unique characteristic of the dirt and how it reacts to water. The moon dust turns into shred-able brown pow. It is true that some of the best runs of the tournament went down during practice and qualifying. The preparations made for the finals went well beyond just three days. Rampage represents a lifetime of dedication to one extremely dangerous profession where minute miscalculations can result in life–altering crashes. The arena was set for these gladiators to do battle against each other on their chariots of carbon, aluminum and steel. Let the games begin.

Difficulty of line, amplitude, creativity, tricks and style are the criteria that riders were judged on. Each participant had ample time to practice their chosen line, but some parts of the terrain were so fragile, they could only be ridden once, which meant that the finals would be the first and last time they could be hit. Intricate traverses and subtle take-offs were expertly placed throughout the venue to give competitors a way to connect their chosen segments. Redbull also hired a team of crack-shot builders to come in and construct larger-than-life wooden features that would allow riders to achieve incredible airtime and add to the mystique of Rampage. Blending big-mountain freeride lines with slopestyle jumps and ramps defines the current event and entices the top caliber pros to perform impossible acrobatics. The crowd trickled in for the final event as the wind picked up across the course. Tension, nervousness and uncertainty hung in the air like so many particles of dirt.

“Are you feeling pretty good about today?” I asked perennial contender Geoff Gulevich. “No, actually,” said Gulevich. It was evident that his crashes during practice put a hurting on his body and his confidence. Other riders like Andreu Lecondeguy and Brendan Howey were a bit concerned with the effect of wind on their line choices. “It will be about surviving and getting through the course,” said Howey. Lecondeguy added, “I may not be able to ride my line.” The base camp area was a bustle of activity as the athletes prepared their rigs and their minds for the challenges of the day. A solemn march to the top of the venue was accompanied by second thoughts and some insecurity.

Ten a.m. brought clear skies and backing winds. It was time to Rampage. Tyler McCaul opened up the course with a stellar run on the looker’s right ridgeline. His fluidity and style were silhouetted against a deep blue sky as he launched one of the biggest drops of the day. He went on to stomp the landing and put himself squarely in the top five. “I had to just turn my brain off and not overthink. I knew what I had to do to keep it together,” said McCaul in between runs.

Maintaining mental focus is paramount to success in a high stakes event like Rampage. Believing in your machine and in yourself is what gets these riders from top to bottom day after day. Riders like Cameron Zink illustrate this focus. In 2010, Zink took home gold at Rampage after executing a perfect 360 off of the Oakley Sender. This year’s Oakley Sender was a bit more elaborate than in the past and it included a multitude of take-off options. The highest being somewhere in the neighborhood of 50-feet over the deck. Zink and fellow competitor Kyle Strait worked together on a line that would lead into the largest drop of The Sender and promised to awe the crowd. The technically demanding top section created the perfect in-run and Zink and Strait made good on their promise. Strait came in with heat and threw a flawless suicide no-hander followed by a well-crafted series of hits lower down on the course. This run propelled him to the top spot going into Run 2. Ever the tactician, Zink had his build crew install a handmade wedge on the take off of The Sender in between runs. Speed and confidence came together at once to provide Zink the opportunity to huck a massive back flip high above the cavalcade. Sticking the landing was no worry and he cruised to the finish and into the record books on two wheels.

The end of the start list saw the likes of Cam McCaul, Kyle Norbraten and Kelly McGarry utilizing the north side of the venue. “We did a lot of digging and put a pretty wicked line together that is original and protected from the wind,” said Norbraten. Many believe Norbraten was robbed of victory last year and he was determined to settle the score. His huge step-down 360 was well planned, but he over rotated and crashed hard. Rolling to his feet in front of the spectators showed that he is one tough hombre. The highlight of the morning came with McGarry’s back flip over the 72-foot canyon gap. A seemingly impossible feat considering he stands about 6′ 5”.

Due to impending weather, the intermission was canceled and riders were ushered back to the starting line. The winds began to pick up and a limited amount of the athletes were able to get a second run. An impressive showing from Andreau Lecondeguy incorporated various technical aspects of the upper section, a clean tabletop air off the sender, followed by a massive step-up back flip into a one-handed superman seat grab. His style and speed were unmatched by most of the field. The remaining riders continued to pummel the dirt and deliver stellar runs to please the audience. Mitch Chubey from Canada had an excellent line selection that utilized a step down gap into a tight run out. His landing was clean, but he lost control shortly after and plowed into an embankment not more then 10 feet in front of me. As the dust settled, Chubey failed to get up and I rushed to his side. His breathing was labored and he complained of lower back pain. We got his helmet off to clear his airway just as the paramedics arrived on scene. Chubey would not return to competition, but he would take home the unofficial Tough Guy award.

2012 bronze medalist and St. George local, Logan Binggeli, came into his second run with the intention to “nail the same line but step it up.” His upper section was clean and as he approached The Sender, he looked confident. Off the lip and into space he pulled an unexpected back flip. The rotation was quick, but he came into the transition a little far left and slammed a rock. He and his bike compressed and tumbled into the sagebrush flats. His fate would be the same as Chubey’s and he was airlifted to a trauma center with a broken femur.

The middle of the pack was yet to have their turn, and the back-to-back crashes delayed their starts. Ominous dark clouds encircled the peaks and the wind returned to gale force. A two-hour weather hold resulted in an anticlimactic cancellation of the second round. The judges believed rider safety was compromised due to the strong winds and ensuing storm. Much to the dismay of the athletes who had a terrific second lap, the judges picked the winners based off of their first run score. Mother Nature had intervened and the champions made their way safely down to the podium. The crowd was left wondering what might have been.

The masses reconvened at the base of the venue and cheered the victors as they celebrated their accomplishments. Chaotic Kyle Strait was awarded the golden crank and his win represented the first repeat victory in Rampage history. “This has been a long time coming and I am pumped,” said Strait. He was the 2004 Rampage champion at the age of 17. His signature suicide no-hander had a lot to do with that victory as well. Kelly McGarry took home silver as well as the “People’s Choice” award. “It is cool to know that people like me and are stoked on my riding. I was a little scared [of my run] at first, but it felt good when I brought it around,” said McGarry in his jovial New Zealand accent. Third place went to Cameron Zink. He also captured the Utah Sports Commission “Best Trick” award with his epic back flip off The Sender. Lecondeguy and T. McCaul rounded out the top five.

Although some of the other riders were a bit soured on the results, they went home knowing they left it all on the course. Their performances were inspiring and will serve as added motivation to come back even bigger next year. Check out www.redbull.com/us/en/bike for highlights and clips from this year’s event. The entire competition can be seen in stunning HD on NBC Dec. 21 as part of the RedBull Signature Series. Tune in and get stoked.

Check out more photos of the event by Ben Melini here.