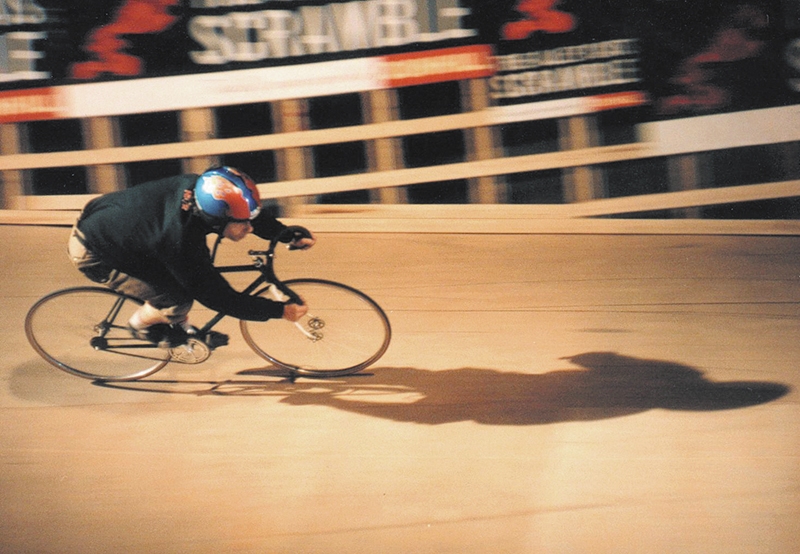 Human-Powered Rollercoasters: a Brief History of the Alleycat Race

Those who have participated in SLUG’s annual SLUG Cat alleycat race know the deal: Sign the manifest, strap on your helmet, and hit the fucking pavement as you solve riddles to make it through the checkpoints throughout the city. A simple foundation of bikes, beers and bands brings riders from any level out to explore spots that they might not have otherwise known about while riding through obstacles and winning prizes sponsored by local businesses. While locals may share stories of the last two races held in our city, what most participants probably don’t know is how all the madness began, and trust me: Wikipedia is not your source on this one.

John Englar was inspired by the New York punk scene in the ’80s—where kids soaked the streets with piss, started street fights, and blew through lights around the city; where freaks and outcasts thrived and clubs held dank shows full of moshing bodies. Englar and a bunch of his buddies wanted to super-charge their scene in Toronto, so they started by hosting a Halloween bash at their warehouse in ’89. Participants would go through a prison-like barbed-wire fence to get to the race, where they’d find themselves amid the tried-and-true formula that his crew came up with to focus on bikes, beers and bands. The guys didn’t shy on a damn thing, and the early bashes sound gnarly as hell: Kegs sat in BFI dumpsters filled with ice, and punk bands provided the soundtrack (one year even saw Run DMC perform). Eventually, with the help of his friends and a tobacco sponsorship from Dunhill, Englar ended up building a figure-8 velodrome (the Human Powered Rollercoaster), which still stands to this day, albeit gathering dust in storage. With a friend who owned a bike shop that sponsored prizes, Englar says they were just “trying to sell some T-shirts, make some money, have a shitload of fun and have a wicked party on Halloween.” The first couple of years were pretty mellow, Englar notes, but by ’92 on Ontario Street, Englar and his friend Red Nick began to hold true to the triple-B formula and brewed the beer themselves. “That was the fucking shit,” Englar says.

Despite how crazy those early bashes were, the crew was fit for the chaos. “It was all weird, so it seemed pretty normal,” he says with a laugh. From chasing traffic head-on to avoid cops, to stealing cameras from photographers at the event for a prize, to riding the architecture down alleys with zero boundaries honored, the lifestyle catered to aggressive enthusiasts looking for thrills. “We got to reign [in] terror on the city and scare the shit out of people,” Englar says. “I think that was the best part.” Even the cops eventually got used to them and “would just pull into the intersection and turn the lights on, ’cause that was the safest thing to do,” he says.

When the ball started rolling and the scrambles started getting bigger, however, he eventually eased himself out of hosting the events to focus on going pro with his cycling team, the Jet Fuel Coffee Cycling Team, which is currently the longest-running cycling team in Canada. While Englar says he “got out of it because [the organizers] all turned into treasure-hunting hippie guys looking to have fun and hang out with their buddies,” he seems to hold true to the messenger appeal of running through traffic and living as close to the edge as he can. Although the event gained momentum internationally, thanks to his friends bringing video tapes of the events to a world messenger championship in Berlin, Englar was adamant about clarifying the real origin of the scramble: “In the beginning, everyone says it was a courier thing, but to be really honest with you, in the beginning, we were all enthusiasts, and a couple bike couriers showed up,” he says. “Originally, it was a bunch of us who hung out in a warehouse, and we were like a bike gang. We were 17, 18, and we would get super-fucking stoned and we’d ride around the city terrorizing alleyways and riding the architecture, jumping off stuff. We were the alleycats, and that’s why it’s called the Alleycat Scramble.”

Revisiting the alleycat races seemed to be biting into a slice of nostalgia pie for Englar as he guided me through pictures online of posters and laughed at the shit they used to get away with, like run-ins with the cops. Even though his energy is currently being spent crunching numbers, recruiting members and racing with the cycling team, there are thoughts of pulling the velodrome out from storage for a 25th-anniversary party of the coffee shop behind the team if funds are in his favor. Englar seemed pretty nonchalant about the momentum the alleycat bashes gained, but he expressed surprise that SLUG contacted him for an interview. After he heard about our twist of the event, he seemed content: “That’s what it was meant to be—bicycle racing for the non-athletic/jock type,” he says. The gist of it all, though, really lies in the simplicity of “riding the urban architecture” and experiencing the city in a way that cars and legs alone can never give you.

This year’s SLUG Cat will be held on Saturday, May 23, and will be sponsored by Beer Bar, Blue Copper Coffee Room, Fishers Cyclery, Ogden Made, SLC Bicycle Company, Saturday Cycles, The Stockist, Traitor Cycles and Velo City Bags. Traitor Cycles will also be supplying a Cutlass frame as a prize for the event! Registration starts at 4 p.m. at Saturday Cycles (605 N. 300 W.), and the Cat starts at 5 p.m. Go to SLUGmag.com/events to stay up to date on race times and other information.