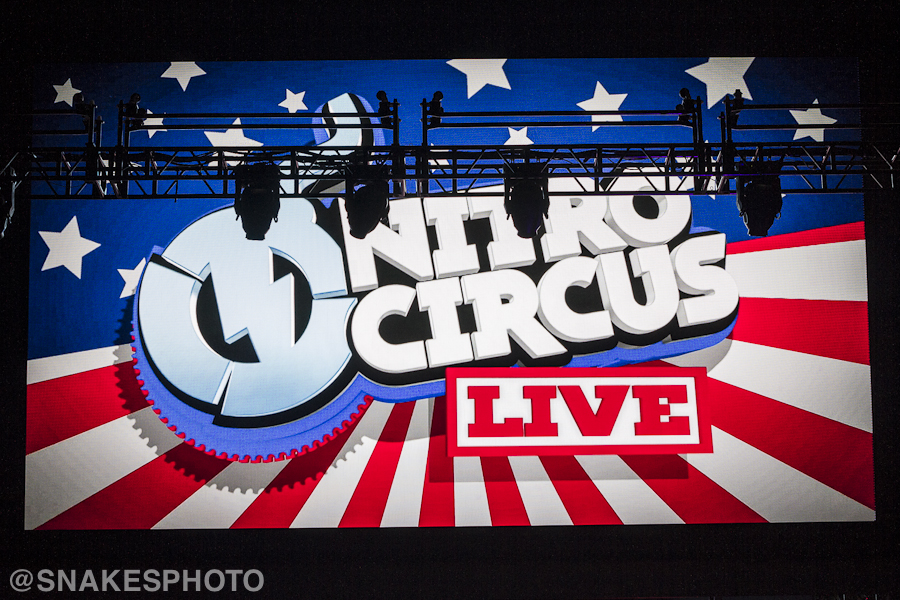 Utah’s own family of daredevils, the Godfreys, as well as their motley crew of comrades, invaded the Vivint Smart Home Arena this past Friday night to throw their famous Nitro Circus Live show for the second time in the Salty City. Hailing from Draper, co-founder of Nitro Circus Live Greg Godfrey, along with ringleader, Travis Pastrana, have brought their famous television show to a live arena tour and have only gotten crazier since the last time they were here. With a star-studded crew of FMX, BMX and “contraption”-riding stuntmen, Nitro Circus Live is really something you have to see to believe. Round Two was not only bigger but also better, as each rider rode with even more passion than last time.

A Tribute to the Fallen The show started off with one of the most heartfelt tributes I have ever witnessed, to fallen daredevil and Nitro Circus alum Eric Roner. MC Jeremy Rawle filled the arena with energy as he asked everyone in the crowd to not sulk in silence, but instead to make as much noise as possible to honor Roner, as well as his family, who was honored and in attendance at the show.

It was apparent that Roner was not only a friend to the Nitro Circus family but a brother and a constant inspiration. The crew sported their “Live Like Roner” hats all show and rode with even more drive then ever in remembrance of their fallen brother. After the tribute, the show started off with a bang on the mega ramp with boards, bikes, roller blades and even scooters launching into the air pulling more insane stunts with every drop. Backflips seemed to be a staple, and combining tricks with a backflip seemed to also be second nature. Among the most impressive tricks were Weasel pulling a backflip under flip on a scooter and Jersey’s own Brandon Schmidt lacing a 720 Japan Air on a snowboard on wheels.

Next up was moto mayhem as the FMX men, carried by fearless leader Pastrana, rained kisses of death and Superman seat grabs through the air like fireworks. The early stages of these moto tricks were strictly without inverts, an ode to the early times of FMX riding. Pastrana, who was injured the last time Nitro Circus Live came to Salt Lake, gave the show an extra boost just by having his presence known. It was a treat to see the legendary rider do what he does best, especially at an event and venue such as this.

Back to the mega ramp, we went with the infamous contraptions, dreamt up by the Nitro Circus madmen and madwomen. Here is where the Godfrey Clan shone: Ethan and Josh Roberts, as well as Gavin Godfrey, absolutely slayed the ramp with everything from kayaks to skis and, of course, their big-boy trikes. Another heartfelt moment of the show was Bruce Cook showing his love for the Nitro Circus and the family that he feels within it. Bruce was paralyzed 23 months ago while trying to land a double front flip on an FMX bike at Nitro Circus. After a long and tough road to recovery, Bruce was back to ride his modified bike and backflip it for the SLC crowd. His story and undeniable smile lit up the arena and gave way to an inspirational and tear-jerking performance as he went inverted on the same machine that had put him down almost two years prior.

It was volunteer time, and the Nitro Circus emcees pulled out a couple of daredevils from the crowd to join in the fun. The plan: Backflip an FMX bike with three people on board. Cam Sinclair was the pro, and the volunteers were on for the ride. The three lined up with one on front, Cam in the middle and the last behind him, a lineup they had never tried before for this stunt. For extra courage and hype, they played videos of past volunteers not having successful landings as the mega screen glittered with carnage from past wrecks. The three-man stunt bike rolled up and over almost perfectly, with the last man bailing off the back at the last minute. Luckily, no one was hurt, and the stunt went off flawlessly. The last hour of the show was all about big air and bigger tricks, with all of the riders testing the limits of their skills. James Foster flawlessly spun a triple backflip while Gavin Godfrey sent trick after trick on mountain bikes and trikes to please the crowd. Whatever trick was going down, getting upside-down was standard for these guys.

The show ended with the famous Nitro Bomb, which involved all of the riders throwing backflips in a line with pyrotechnics going off simultaneously. I counted at least eight riders, all in the air at the same time, making the bomb a pretty amazing sight to see. The last bits of explosions went off, and confetti fell from the sky, raining down on the athletes who were having a dance party on the ramps. Another amazing show in the books for the Nitro Circus team, and SLC undoubtedly got its money’s worth.