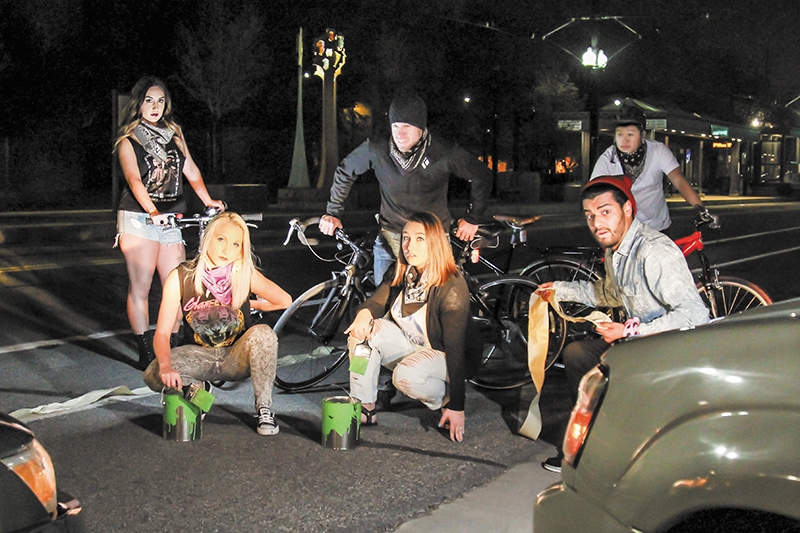 Although SLUG’s Legal Department is fidgeting nervously inside a closet somewhere while the Columbia Journalism Review concludes its investigation into SLUG’s article in the March 2015 Issue on the updated parking/bike lane situation on 300 South, the magazine is boldly pressing forward with further coverage of #WeirdBikeLaneGate with a smoking-hot, exclusive lead (read: we Googled stuff that was already out there). The City has obviously been seduced by cyclists’ gorgeous helmet hair because it will continue its firm steps in creating a bike-friendly utopia by inserting the second phase of the protective bike lanes between the sidewalk and parking spaces all over 200 West, ranging from 100 South to 800 South. Yes, that 200 West, known to residents as Liquor Store Alley, and yes, those bike lanes some drivers were griping about the last time.

When asked about continued efforts to confuse and disorient Utah’s already terrible street parkers with bike lanes circumscribed by concrete barriers and in between the sidewalk and green-painted hopscotch boards filled with perilous blind spots for auto parking, urban planner Ned Maloof, in his ever-upbeat manner, says, “This is gonna be great—great for our bike-share program, great for exercise, great for the environment! You know, it may be difficult to imagine a future winter in Salt Lake City without the inversion gunk clogging up our lungs, but dreams can come true … because they must.”

Drivers who were already irked by the 300 South and 300 East bike lanes cutting down on overall parking spots in the Downtown area are decidedly less than thrilled about the new plans for 200 West. Like a phoenix from the ashes, motorists between the ages of 45 and 1,000 have already sprung out of their Price is Right comas and have taken to the streets in riotous protest against the new bike lanes. Many cyclists have expressed utter confusion as to why frothing, belligerent strangers with beet-red complexions have been screaming obscenities at them from inside parked vehicles. When asked about protesting motorists’ main rationale, accountant and suburban dad Wesley Blongatt says, “All roads should exclusively belong to vehicles that chug and fart out fossil fuels faster, and in greater quantity, than bros chugging jungle juice at a fraternity chili cook-off.”

Amid the makeshift broken antenna war swords and gasoline-fueled angry-mob torches, crudely sketched posters that read “OFF MY ROAD,” “BI-SUCKLES BE GONE” and “MY PENIS, MY CHOICE” (one anti-circumcision advocate didn’t know which protest he was attending) clearly illustrate the growing and unfounded resentment car drivers harbor against the cyclists rather than against the City itself. At the front lines of the demonstration against the 200 West lanes, Blongatt shouted through his megaphone, “Swerving between the wide lanes on 200 West allows me to exercise my individual rights, something, something, Jazz games, something, something, our Constitution!” Supporting motorists were moved to tears.

In an unparalleled Freaky Friday twist that no one anticipated, local hip business owners have joined the rally in solidarity with the motorists, not because they feel one way or the other about cars, but because the lanes have been costing them MONAY. As 300 South merchants have learned, accessing shops across these new interposing bike lanes from the street is akin to crossing a bridge with an evil troll hurling rocks at you from beneath, and they’ve grown a little raw about the situation. “We are changing a few things this time around, I think,” lawmaker Patty Nugella explained from beneath her office desk (she scares easily in interviews). “We actually listened to business owners’ concerns, so I’m hoping no one yells at me again.”

In true angry-grandma fashion, Mayor Rosalee Kirkpatmore threw up her hands in response to the uproar by screaming, “Santo Infierno, I’ve done so much for you ingrates, and you still complain?! We chose 200 West because the street is wide as fuck, but apparently, trying to reason with people is like spitting in the wind, so I’m quitting this shit and moving down to St. George.”

We asked several cyclists for comment on the fracas, but all of them rolled their eyes, and said in unison, “Your March article was not funny.”

It might be too soon to tell whether the cyclists of the city will emerge victorious in one long, orgiastic procession spanning from near the U.S. Post Office between 100 South and 200 South all the way to Camelot Inn & Hostel near the intersection of 200 West and 800 South while the motorists rub their eyes in disbelief, wailing that the miscreant hipsters have done it again. However, we predict the motorists will eventually forget why they felt scandalized by being forced to live in a cleaner society in the first place (especially when gas prices rise again), and will go back to enjoying being the sole benefactors of Taco Bell drive-through.