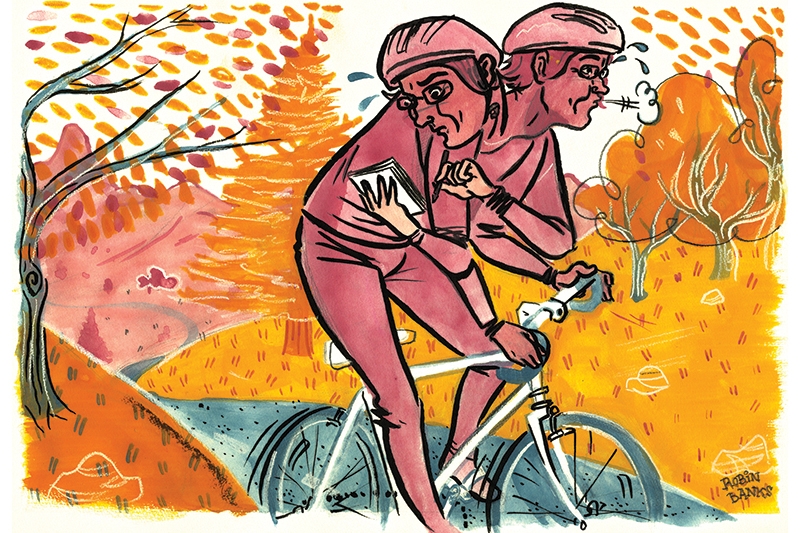 Dave Iltis grows extra limbs and heads as he manages the editorial and logistical aspects of Cycling Utah, and still finds time to get on his bike. Illustration: Robin Banks

Started by David Ward and Bob Truelsen in 1993, Cycling Utah served as a convenient way to list race schedules and results. It also made the perfect forum for issues affecting the sport and enabled people to feel more connected to each other.
With a shoestring budget of just $700, the two men pooled their writing and organizational talents to put out the first season of issues. The publication gained traction quickly and filled a necessary niche in the local cycling scene. It wasn’t long until Ward and Truelsen earned their money back and decided to continue publishing Cycling Utah every year. By the fourth season, they brought on a young and ambitious student and racer to help them grow. David Iltis utilized his salesmanship skills to sell advertising and bring in revenue for the publication. The hard work paid off, and by 2001, Iltis took over Truelsen’s responsibilities and began leading the charge at Cycling Utah. When asked what his current position is, Iltis fired back, “the Editor, chief cook and bottle washer at Cycling Utah.”  In addition to his wit, his organizational prowess has enabled the paper to become a valuable resource used by many people within the biking community.
Cycling Utah celebrates its 21st year in 2013, and continues to bring cyclists from around the Intermountain West closer together. “There are really only about 10 publications like ours across the country,” says Iltis. The comprehensive nature of the magazine utilizes info from a variety of sources and people connected to cycling. Contributions come from every facet of cycling and are aimed at garnering more interest for the sport. Roadies and mountain men, commuters and tourers, racers and recreationalists all have a place in the pages of this magazine. “The community here is incredibly diverse and welcoming, and people ride in all sorts of capacities. It is strong in number per capita, and perhaps a lot more so than most other states,” says Iltis.
Gear reviews and profiles of local pros and admirable joes round out the content that Iltis aims to cover. “We rely heavily on contributors to make sure we cover things both locally and regionally,” says Iltis. Keeping people abreast of upcoming events, races and outings is a primary function of the publication, and Iltis noted that this year, they had over 600 entries to include in their annual calendar. Road and mountain racing has gained a foothold in Utah, and people from around the globe come here to witness the spectacular riding opportunities the state has to offer. Professional races like the Tour of Utah bring tons of tax revenue to the local communities and give the state a lot of street cred. Keeping the stoke levels high is also a goal of Cycling Utah. Iltis is a huge proponent of more people getting involved in active transportation. He agrees that while Utah isn’t the most cycling-friendly state in the Union, “we are getting there,” he says. Programs driven at the town, city and county level have struck a chord with many riders and proven that small groups can drive change.  The magazine recognizes when opportunities arise to proliferate information across the community, and in their latest issue, they highlight the unveiling of the Salt Lake City bike share program, modeled after programs in larger cities like Washington D.C. and Boston. The article mentions how the dozen or so kiosks will allow would-be drivers a healthy and eco-friendly alternative to driving their cars around town.
Additional support for bicycle commuting has come from the Utah Department of Transportation, Mayor’s Bicycle Advisory Committee and SLC Transportation Division, to name a few. “These programs will have great effect over the next few years, especially when it comes to limiting air pollution,” says Iltis. Utah is in a prime position to take the lead on certain initiatives and having a publication such as Cycling Utah disseminate the info to the greater population is invaluable. With the continued backing of the community and other sources, it will be very interesting to see the changes that come about in the next decade.
Keeping his finger on the pulse of the cycling world has been a full-time job for Iltis since 2001, but he still finds time to get out and ride. “I am mostly a road rider, but do a fair amount of mountain biking as well. I love the Summit County and Kamas roads. And the Wasatch Crest and Shoreline Trail are incredibly good mountain bike rides, right here in the backyard,” says Iltis.
For more info on the magazine and all things bicycle, check out cyclingutah.com. Hard copies can be found at any local sporting good store or bike shop and in your favorite hometown cafes and restaurants. Now get out there and ride!
Photos: